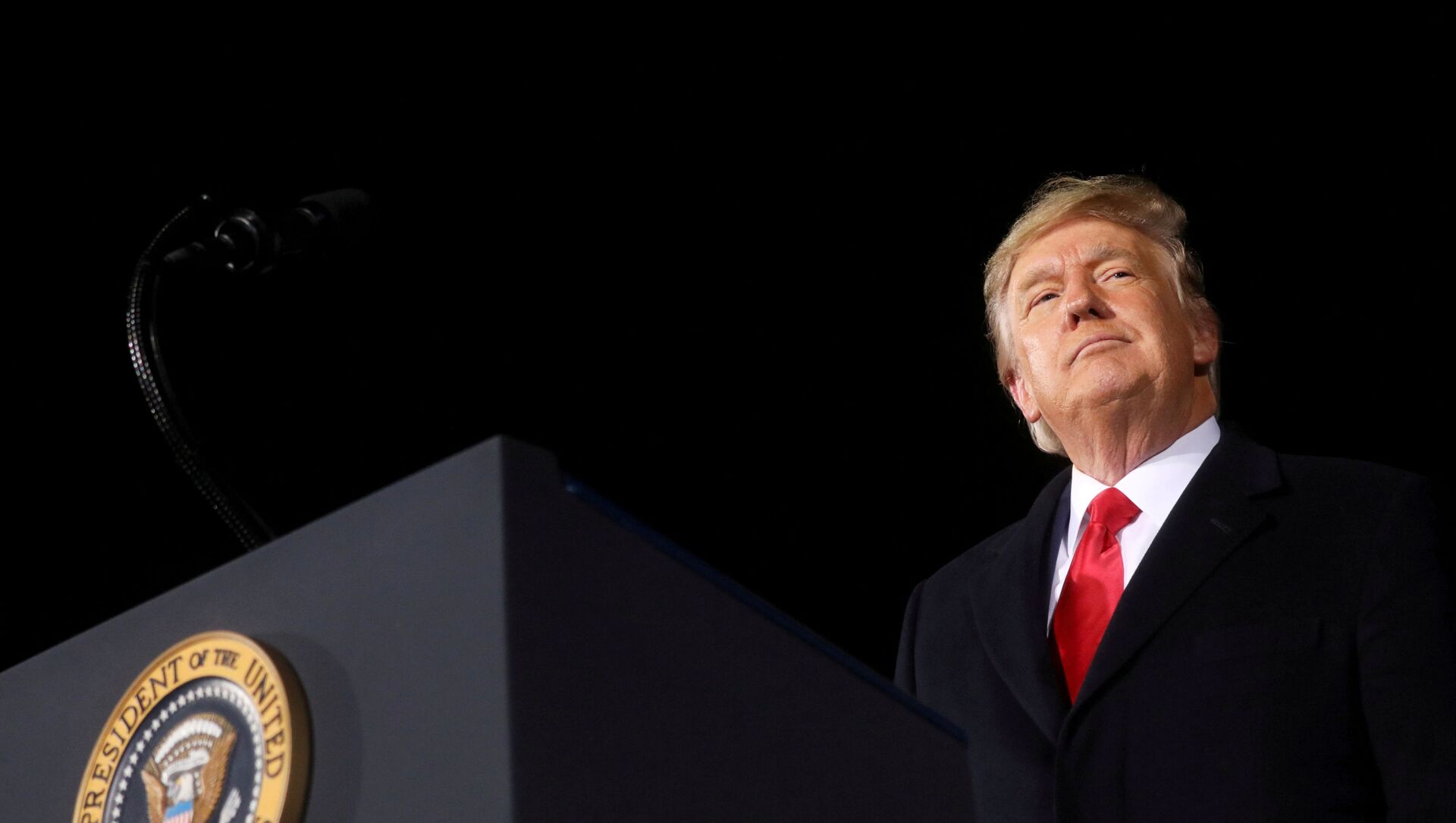 Ekaterina Blinova
All materialsWrite to the author
The Biden administration and the Democratic Party are moving quickly to impeach Donald Trump, remove his appointees from key positions in the government, and prosecute the former president's supporters, says Wall Street analyst Charles Ortel, explaining the apparent causes behind the rush.

On 9 February, the US Senate authorised the impeachment trial against Donald Trump over "incitement of violence" by 56 to 44 votes with six GOP senators – namely Susan Collins of Maine, Lisa Murkowski of Alaska, Mitt Romney of Utah, Ben Sasse of Nebraska, Pat Toomey of Pennsylvania, and Bill Cassidy of Louisiana – joining the Democrats. All of them, except Cassidy, earlier rejected Sen. Rand Paul's motion questioning the constitutionality of the procedure.

Given that 44 Republicans voted against proceeding with the trial indicates that the Upper Chamber is likely to acquit Trump again: at least 67 votes in total are needed to convict the former president. Following the vote Senator Paul published an opinion article on Fox News, lambasting the Democratic Party's one-sided approach to Trump, and recalling instances of Democrats "inciting violence" against their political opponents over the last four years. "President Trump deserves the same standard as the other side," Paul wrote. "He deserves the protections of our Constitution."

The Senate impeachment trial against private citizen Donald Trump has exposed a two-tiered justice system which has been maintained by the US establishment for a few decades, says Wall Street analyst and investigative journalist Charles Ortel.

Now that Democrats have ruined the impeachment option and moved into a political tool, let’s impeach Jimmy Carter next....selling the Panama Canal was so outrageous.

​The unfolding situation is hardly surprising given the FBI's double standard approach to two presidential candidates, Hillary Clinton and Donald Trump, back in 2016, the two-year long Special Counsel Robert Mueller investigation into non-existent Trump-Russia "collusion," and Trump's impeachment by House Dems in 2019, according to him.

many more Democrats made statements actually against Trump supporters, Supreme Court Justices. Clinton said he was illegitimate for four years and never let up. Never once was she, or others, censored and now a wall with armed troops surround the Capitol.

​Starting from 19 January, US investigative journalist John Solomon released several FBI documents on the Russian collusion investigation apparently belonging to a trove earlier authorised by then President Trump for declassification. One of them indicated that the FBI leadership "refused to act on the FISA warrant application" with regard to Hillary Clinton’s campaign, "which was the opposite of what they did for Donald Trump’s campaign," Solomon pointed out.

In late 2014, the bureau opened a probe into a foreign power's efforts to curry favour with Hillary Clinton ahead of the 2016 presidential race through donations. The FBI leadership proceeded with the investigation slowly, leaving some agents wondering as to why "the FISA application [had] remained in limbo for the last four months." Solomon pointed out that the FBI memos don't provide further evidence that the FISA for Hillary Clinton's campaign has ever been approved. Instead, the bureau gave Clinton's team a defensive briefing in October 2015, explaining that "the campaign should increase its vigilance of contributions related to any of the matters discussed above."

"The latest documents appear to corroborate a working theory that management in the FBI and at Justice Department impeded required investigation into who may have been funding payments towards the Clinton Foundation and Clinton campaigns that likely were disguised and illegal contributions from foreign entities," suggests Charles Ortel, who has conducted a private investigation into the Clinton Foundation's alleged fraud for several years.

In contrast to the Clinton probe, the FBI and DOJ hastened to issue a FISA warrant against Trump aide Carter Page, largely relying on the unverified and now debunked dossier of Christopher Steele. Furthermore, in order to sustain government surveillance of Page, ex-FBI lawyer Kevin Clinesmith doctored an email about the Trump aide to conceal the fact that the latter was "a source" for the Central Intelligence Agency (CIA). But that's not all: the FBI also failed to hand over records of Page's conversations with the bureau's informer Stefan Halper to the FISA court, according to documents released by Just the News on 26 January. The transcripts of these conversations could potentially exonerate the Trump aide. IG Michael Horowitz called the bureau's failure to disclose the material a major flaw of the Trump-Russia probe.

"Unlike Trump and his supporters, the Clintons and their supporters seem still to be immune from risks of prosecution for serious crimes," Ortel remarks. "This is pungently underscored by an Obama appointed Judge letting [Kevin Clinesmith], the only person convicted at trial by Special Counsel John Durham, off with a wrist slap for the egregious act of knowingly manipulating evidence that exculpated Carter Page, into evidence that seemed to incriminate him."

​What's Behind the 'Two-Tiered System of Justice'?

Citing a stark difference in the FBI's approach towards Team Clinton and Team Trump, Ortel suggests that the former president posed a threat to the US establishment's status quo maintained from November 1992 forward.

"According to many published sources, Hillary Clinton and other Clinton allies were masterful in covering up core elements of many scandals, while intimidating and later punishing rivals and opponents," the Wall Street analyst says. "This was especially true once the Clintons occupied the White House from January 1993 through January 2001, as their people burrowed into key positions at the FBI, Department of Justice, and IRS."

Even after the Clintons stepped down, they somehow managed "to derail an investigation into the Clinton Foundation, which has never been organised or operated lawfully and likely has been one conduit for donors to exchange money for influence, in violation of numerous laws," according to Ortel.

Had Trump managed to refurbish the FBI, DOJ, and other key agencies by appointing true patriots to leading positions, many inconvenient facts would have been disclosed, triggering a domino effect of a gargantuan scale and backfiring not only on US establishment but also on former and present foreign politicians, deems the analyst.

​On 9 February, the DOJ announced that it would replace most top federal prosecutors who were appointed by former President Donald Trump, which according to the department is commonplace for new administrations. Similarly, despite Donald Trump officially declassifying "Russian collusion" documents, most of the trove detailing FBI and DOJ errors and flaws has remained out of public view so far.

Meanwhile, Delaware US Attorney David Weiss, who is overseeing the tax probe of Joe Biden's son Hunter, and Special Counsel John Durham, appointed to investigate the origins of the Trump-Russia probe, will for now remain in office, according to Reuters.

On the other hand, as Axios reported on 2 February, Nicholas McQuaid, ex-colleague of Hunter Biden's lawyer Chris Clark, was tapped to temporarily lead the DOJ criminal division." According to the media outlet, "it’s not clear whether or to what extent the main branch of the Justice Department is involved in the Hunter Biden investigation."

"For the moment, one must assume that a Biden-Harris administration will chiefly prosecute Trump supporters but let their [own] donors escape prosecution for the same types of crimes," presumes Ortel. "This two tiered system of justice will further inflame passions in our sharply divided nation."