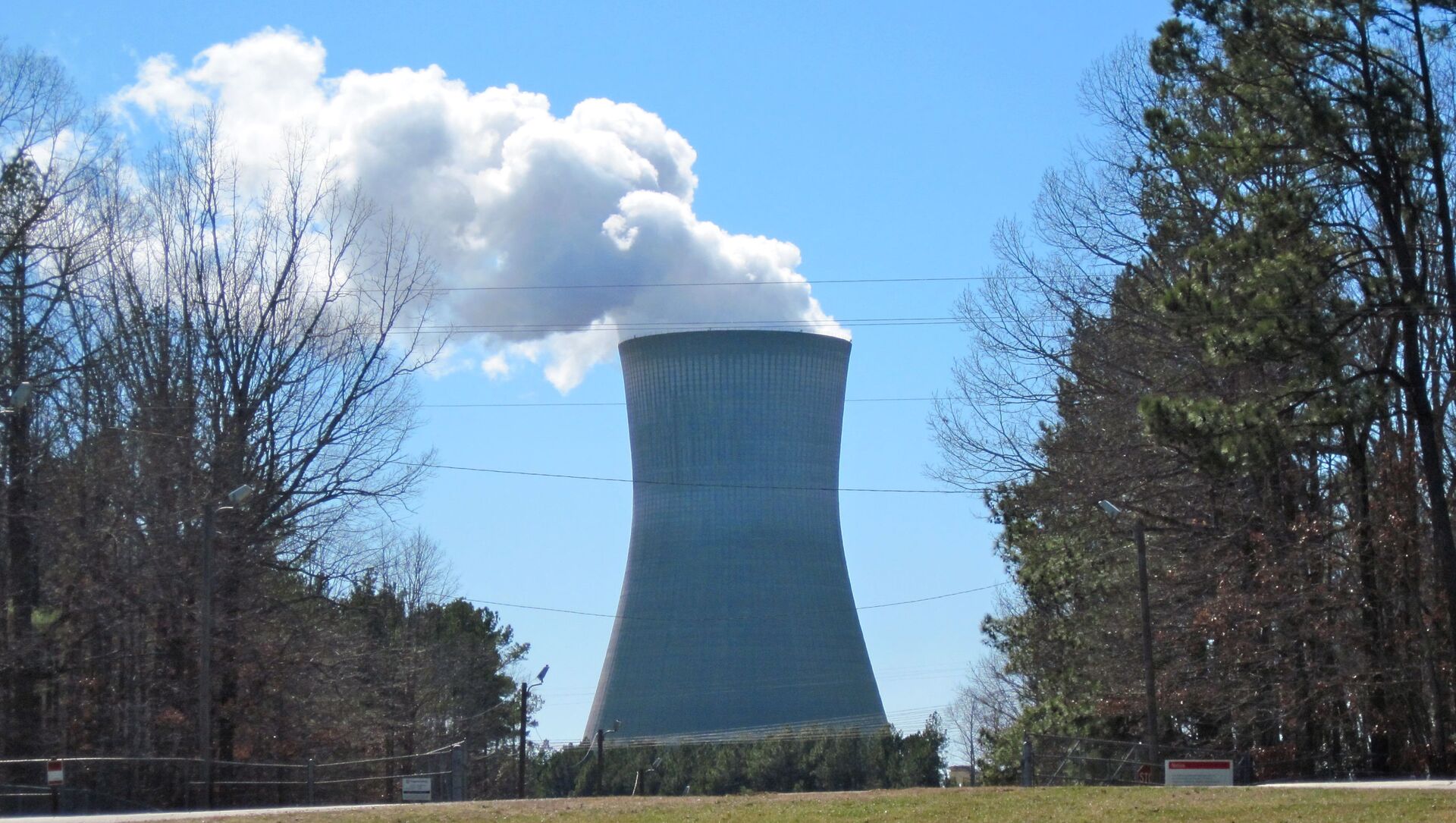 Mohamed Elmaazi
All materialsWrite to the author
Nuclear reactors in the United States were originally only certified to be operated for a maximum of 40 years. However, the Nuclear Regulatory Commission has been extending their operating time beyond that and is now considering doing so, yet again, this time up to 100 years.

Professor Karl Grossman is an award-wining investigative journalist. He authored Cover Up: What You Are Not Supposed to Know About Nuclear Power and Power Crazy and is the writer and presenter of television programmes on nuclear power. Grossman tells Sputnik that "nuclear power plants in the US were never seen as operating beyond 40 years" and that plans to extend their operating licences for more than twice that amount of time is incredibly dangerous. Every day a nuclear power plant operates the intense radiation embrittles (i.e. weakens) the metal in the reactor. “If the reactor is embrittled and cracks”, Grossman says, quoting a nuclear engineer-turned whistleblower, “it’s game over".

Sputnik: You recently co-authored an article with journalist Harvey Wasserman calling on President Joe Biden to “inspect” the US’ “embrittled reactors”. Explain what exactly an embrittled reactor is.

Professor Karl Grossman: As Arnold “Arnie” Gundersen, a nuclear engineer with more than 44 years of experience in the nuclear industry, who became a whistleblower and is now chief engineer at Fairewinds Associates, described embrittlement in a nuclear power plant to my co-author of the article, Harvey Wasserman:

“When exposed to radiation, metal becomes embrittled and eventually can crack like glass. The longer the radiation exposure, the worse the embrittlement becomes. A nuclear reactor is just like a pressure cooker and is a pot designed to hold the radioactive contents of the atomic chain reaction in the nuclear core”, continued Gundersen, whose experience includes being a licensed Critical Facility Reactor Operator. “And metals in reactors are exposed to radiation every day a plant operates”.

“If the reactor is embrittled and cracks”, said Gundersen, “it’s ‘game over’ as all the radiation can spew out into the atmosphere. Diablo Canyon [a twin-reactor facility in California] is the worst, the most embrittled nuclear power facility in the US, but there are plenty of others that also could crack. Starting with Diablo, every reactor in the US should be checked to determine [whether] they are too embrittled to continue to safely operate.”

Metals inside a nuclear power plant are bombarded with radiation, noted Gundersen. The steel used in reactor pressure vessels—which contain the super-hot nuclear cores—is not immune.

Every US nuclear reactor has an Emergency Core Cooling System and a Core Spray System to flood the super-hot core in the event of a loss-of-coolant accident.

Embrittled metal would shatter when hit with that cold water.

The ensuing explosion could then blow apart the containment structure—as happened at the Chernobyl and Fukushima nuclear power plants—morphing into a radioactive plume moving into the atmosphere and be carried by the winds, dropping deadly fall-out wherever it goes.

This apocalyptic outcome was barely missed in Pennsylvania where, starting at 4 a.m. on March 28, 1979, fuel inside the Three Mile Island Unit Two (TMI) nuclear power plant began to melt.

Nuclear Power Will Lead to 'National Suicide', Argues Award-Winning Investigative Journalist
Its Emergency Core Cooling System was activated. But only the year before—in 1978—did the plant receive a license to operate and begin operating.

Had TMI, like so many of US nuclear power plants now, been decades old and its metal pressure vessel embrittled and had shattered—a far greater disaster would have occurred. The entire northeastern US could have been blanketed with deadly radioactivity

Sputnik: Why do you think that embrittled reactors are “at the top of the list of nuclear power concerns”?

But embrittlement is on the top of the list because nuclear power plants in the US were never seen as operating beyond 40 years—because of embrittlement.

That’s why the operating licenses originally issued by the US government for the plants were limited to 40 years. After 40 years, they were considered to be unsafe to run—because of embrittlement.

And, meanwhile, the US government—in the form of the US Nuclear Regulatory Commission—has in recent years been extending the operating licenses of nuclear power plants to 60 years and 80 years and is presently considering extending the allowed length of operation to 100 years.

'Remarkable': Sweden Closes Down Own Nuclear Power Plants, Yet Builds New Ones in Estonia
As the result of the series of catastrophic nuclear power plant accidents—at Three Mile Island, Chernobyl and Fukushima—and the availability of safe, green, cost-effective, clean renewable energy, led by solar and wind, coupled with increasing energy efficiency, the nuclear industry is in its death throes. Only two nuclear power plants are being built now in the US, Vogtle 3 and 4 in Georgia. At nearly $30 billion for the pair, they’re hugely over budget—and their construction costs are still rising. In fact, virtually all operating atomic reactors are producing electricity at much higher base costs than solar and wind.

So the Nuclear Regulatory Commission is seeking to try to bail out the nuclear industry—to keep it going—by allowing nuclear power plants to operate for 100 years.

Last month, the Nuclear Rubberstamp Commission held a “public meeting” on its scheme to further extend operating licenses for US nuclear power plants and allow them to run for 100 years. Speaker after speaker protested this scheme.

“It’s time to stop this whole nuke con job”, testified Erica Gray nuclear issues chair of the Virginia Sierra Club, at the meeting. There is “no solution” to dealing with nuclear waste, she said. It is “unethical to continue to make the most toxic waste known to mankind.” And renewable energy with solar and wind “can power the world.”

“Our position… is a resounding no”, declared Paul Gunter, director of the Reactor Oversight Project of the national organisation Beyond Nuclear, to letting nuclear power plants run for 100 years.

Speakers cited the greatly increased likelihood of accidents if nuclear plants were allowed to run for a century.

Sputnik: How likely is it for a reactor to experience the types of collapses that this relates to?

And this is an “average age”—there are nuclear power plants that are older.

Also, in extending the operating licenses for nuclear power plants for decades, the US Nuclear Regulatory Commission is also allowing them to be “uprated”—to run hotter and harder to generate more electricity and to further increase the likelihood of a nuclear power plant disaster.

The bottom line: a nuclear power plant catastrophe is being invited.

It would be asking for a breakdown.

But a major accident at a nuclear power plant—as the Three Mile Island, Chernobyl and Fukushima disasters demonstrated—is not just like a car breaking down. The consequences are enormous leaving many, many people ill and dead, with cancer a leading cause of death, a result of the spread of radioactivity.

Sputnik: What exactly is it that Joe Biden or his administration can do to address these issues?

Biden must act to prevent what would constitute nuclear suicide in the United States.

Last month, Biden announced a climate change agenda transitioning the US towards renewable energy. But taking action against fossil fuel is not enough. Nuclear power plants are also engines of global warming. The claim of the nuclear industry that atomic energy is “carbon free” is a lie. The “nuclear fuel chain” which includes uranium mining, milling and fuel enrichment is carbon intensive, and nuclear power plants themselves emit Carbon-14, a radioactive form of carbon.

Sputnik: Can these embrittled reactors simply be replaced in order to safely extend the life of the power plant?

Professor Karl Grossman: It makes no sense to replace these deadly machines when here today [we have] safe, clean, green, renewable energy—led by solar and wind.

Nuclear power plants make no sense economically. Consider the only two nuclear power plants now under construction in the US, Vogtle 3 and 4 costing $30 billion for the two and the price still rising, and solar and wind being able to producing electricity at a lower cost—and be put into operation far more rapidly. And there are additional safe, green, cost-effective, clean, renewable energy sources—energy, most importantly, that we can live with.

Sputnik: Is there a realistic alternative to extending the lives of nuclear power plants?

Professor Karl Grossman: The realistic alternative is to shut down all 94 nuclear power plants now in the US and move ahead fully implementing the use of safe, green, cost-effective clean, renewable energy technologies. And this should be emulated in countries all over the world with nuclear power plants.

Three decades ago the Union of Concerned Scientists published a book titled Renewables Are Ready. Now renewables are more than ready to power the world.