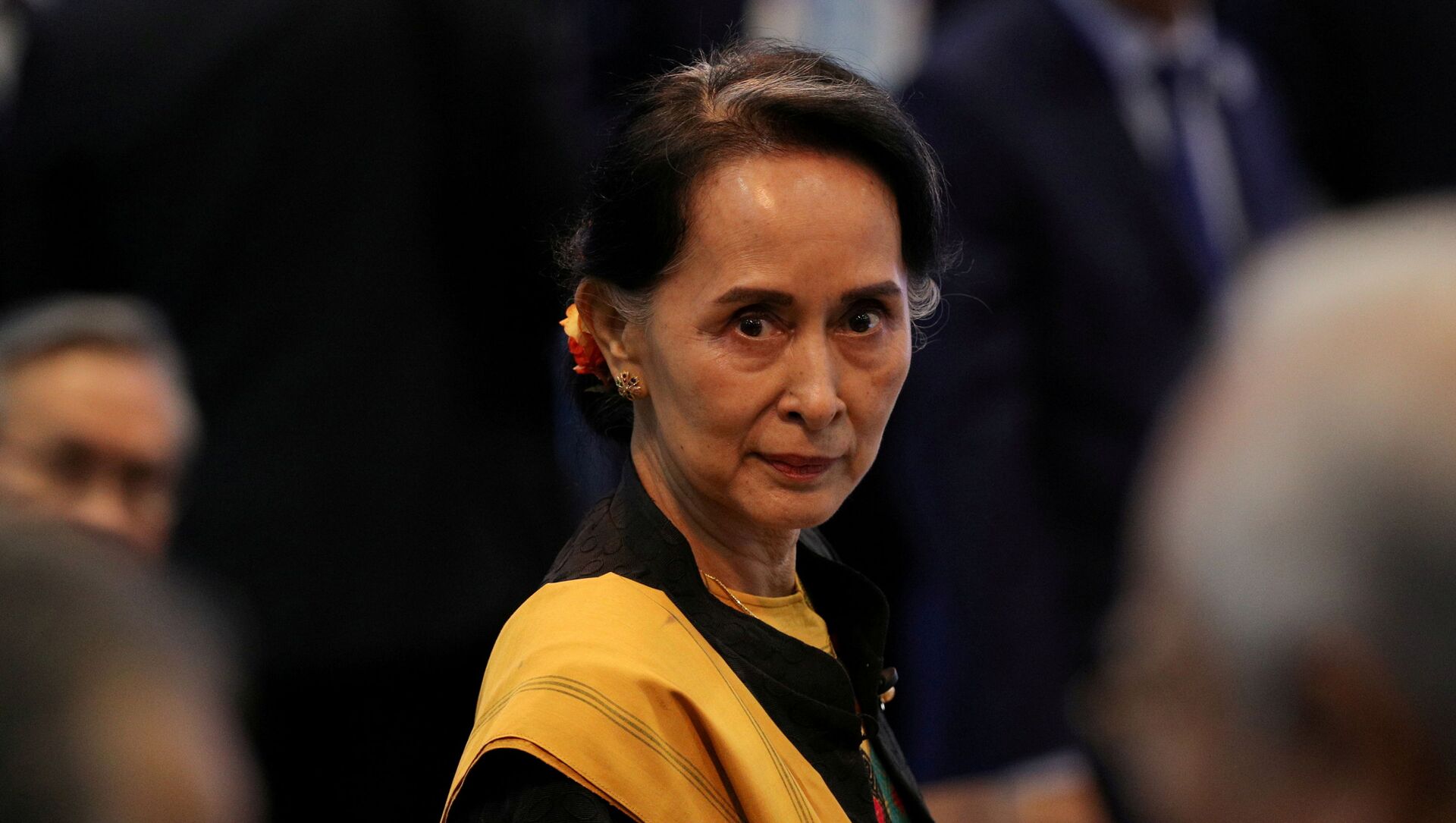 Svetlana Ekimenko
All materialsWrite to the author
Myanmar’s civilian leader, Aung Suu Kyi, along with the president and other top politicians were detained in the early hours of Monday, with the country’s military declaring a one-year state of emergency after weeks of escalating tensions over allegations of vote-rigging in a November election.

Myanmar’s leader Aung San Suu Kyi and other senior figures from the governing National League for Democracy were arrested in an early morning raid on Monday in the capital, Naypyitaw, according to party spokesman Myo Nyunt, reported AFP.

An announcement on military-owned Myawaddy TV said the military had declared a state of emergency and was taking over control of the country for one year.

Myanmar’s leader Aung San Suu Kyi and other senior figures including President Win Myint were detained in a raid amid escalating tension between the civilian government and the military https://t.co/7jyiMIXUxO pic.twitter.com/WKgWx8nrOr

​The declaration, signed by First Vice President U Myint Swe, who will now be serving as Myanmar’s acting president, stated that power is being handed over to Commander-in-Chief of Defence Services Min Aung Hlaing. In the former capital Yangon, Myanmar's commercial hub, troops reportedly seized city hall just ahead of the announcement. 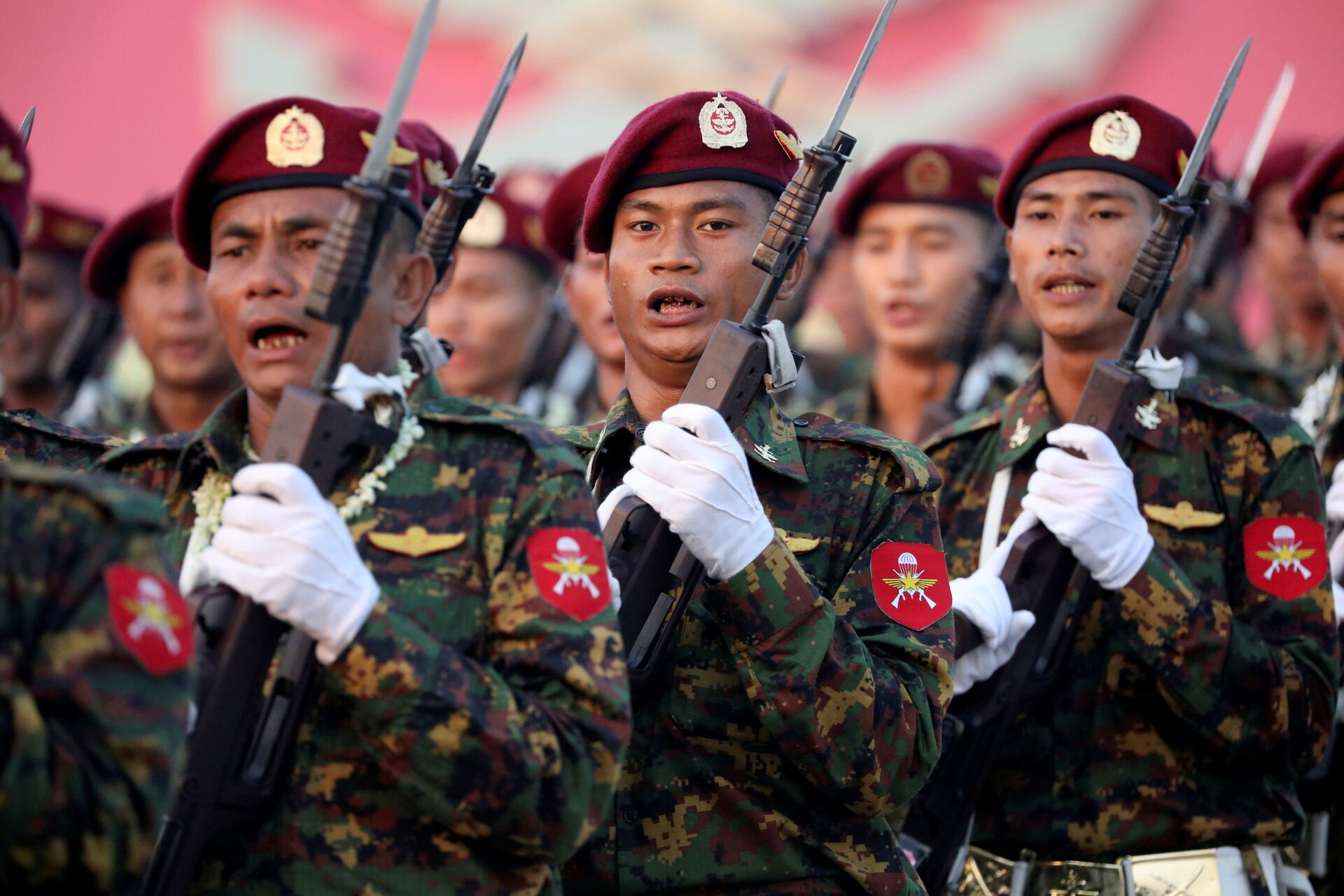 The developments came on the day when Myanmar's Parliament was to convene, with new members sworn in following November elections.

Allegations of a Rigged Election

Tensions had been escalating since January, when the spectre of a military coup was first raised in Myanmar after claims of widespread voter fraud during the country’s second general election since the end of military rule in 2011 started circulating.

At the ballot-casting on 8 November, the National League for Democracy (NLD), led by 75-year-old Aung San Suu Kyi, a former political prisoner, won 83 percent of the available seats. The party claimed 396 out of 476 seats in the combined lower and upper houses of Parliament.

However, the country’s military, known as the Tatmadaw, has charged that there was massive voting fraud in the election, such as allegedly duplicated names on voting lists in scores of districts, while failing to substantiate the allegations with any definitive proof.

Aung San Suu Kyi did not offer any official comments on her party’s election victory or the complaints launched by the military. However, the NLD dismissed the allegations as groundless. Last week, the state Union Election Commission rejected the allegations.

Rumours of a military coup began to circulate after a spokesman for the armed forces, Brigadier General Zaw Min Tun, held a news conference last week on its allegations.

He said the military would “take action”, and use all available options including the Supreme Court.

Myanmar's deposed leader, a Nobel Peace Prize winner for her “non-violent struggle for democracy and human rights” in 1991, came to power after a historic 2015 landslide election win.

The victory of the opposition figurehead, daughter of Myanmar's independence hero General Aung San, assassinated when she was only two years old and just before Myanmar gained independence from British colonial rule in 1948, was seen as accelerating the process of dismantling a half-century of military rule.

In 1988, Aung San Suu Kyi returned to then-capital Yangon, where she became swept up in student-led protests against the military, which had ruled since a 1962 coup.

After the protests were suppressed, Aung San Suu Kyi was imprisoned in her family home, where she remained in detention between 1989 and 2010, under house arrest.

As the NLD took over power, Aung San Suu Kyi assumed the role of state counsellor, a de facto leadership position, created to dodge the constitutional provisions barring her from the presidency.

Myanmar’s constitution forbid her from becoming president as her late husband and children are foreign citizens. While gaining vast popular support, the politician’s international standing was damaged after the Rohingya crisis escalated in 2017.

Well! It won't be the first time "Nobel Prize" has made a mistake in allocation. Just like Obama, Nobel Prize recipient Aung San Suu Kyi was a democracy icon in her homeland of Myanmar
Now, she faces harsh criticism over the "persecution" of Rohingya Muslims#KillingMachines pic.twitter.com/uBIVgXzNmf

​The Myanmar politician faced criticism both inside and outside the country after over 700,000 Rohingya people fled Myanmar for neighbouring Bangladesh in the wake of a n offensive launched by the authorities in Rakhine state in response to an attack by Rohingya insurgents on security posts in the area on 25 August 2017. The situation prompted an acute humanitarian crisis in Bangladesh, where Rohingya refugees live in relief camps to this day.

Award-winning photographer @MRHasan1977 has been visiting the camps in Cox’s Bazaar to document the #Rohingya #refugee crisis. He has shared with IPS a selection of images to document life in the Rohingya refugee camps https://t.co/OU9d3C6Sj4 pic.twitter.com/74OwHimA3Z

​While the UN’s top court, the International Court of Justice, ordered the Myanmar government to protect its minority Muslims from persecution, Myanmar denied claims of having targeted civilians.

Aung San Suu Kyi and the Minister of Foreign Affairs also rejected the allegations of genocide, with "terrorists" blamed for an "iceberg of misinformation" about the crisis, with the military said to have been exercising the "rule of law".

In 2019 the politician went to the Hague to face charges of genocide brought against Myanmar at the International Court of Justice at The Hague, where she acknowledged the ‘possibility war crimes had been committed’, but insisted the events in the country were a legitimate military operation against terrorists. 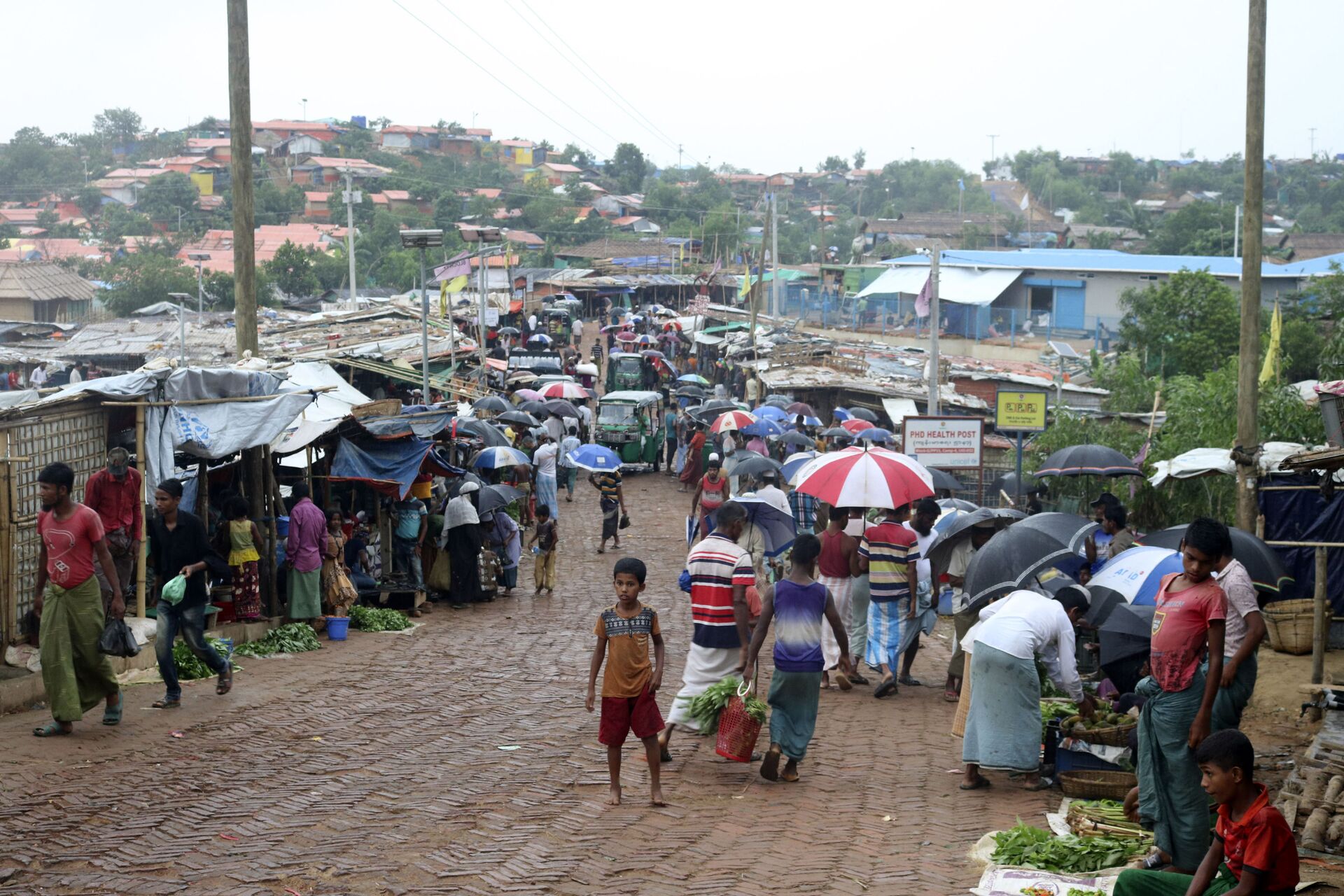 Rohingyas are ethnic Muslims, living in the Rakhine state of Myanmar, who were looked upon by the Buddhist majority in the country as illegal Bengali immigrants, infiltrated from the Chittagong Hill Tracks of Bangladesh.

In 1982 Myanmar's authorities passed a Citizenship law, recognising only those who have lived in the country prior to 1824 and thus Rohingyas were stripped of their citizenship.

‘Enshrined Role’ of the Military

Myanmar’s 2008 constitution, drafted and implemented during military rule, contains a clause that has enshrined a permanent role for it in the political system.

According to it, in case there is a national emergency, the president, in coordination with the military-dominated National Defence and Security Council, can issue an emergency decree to hand over the government's executive, legislative and judicial powers to the military's commander-in-chief.

Accordingly, the constitution says that the commander-in-chief can take over power in extreme circumstances that could result in “disintegration of the union, disintegration of national solidarity and loss of sovereign power”. This can only be implemented out during a state of emergency, declared by the civilian president.
The military was also guaranteed 25 percent of seats in Parliament and control of several key ministries. 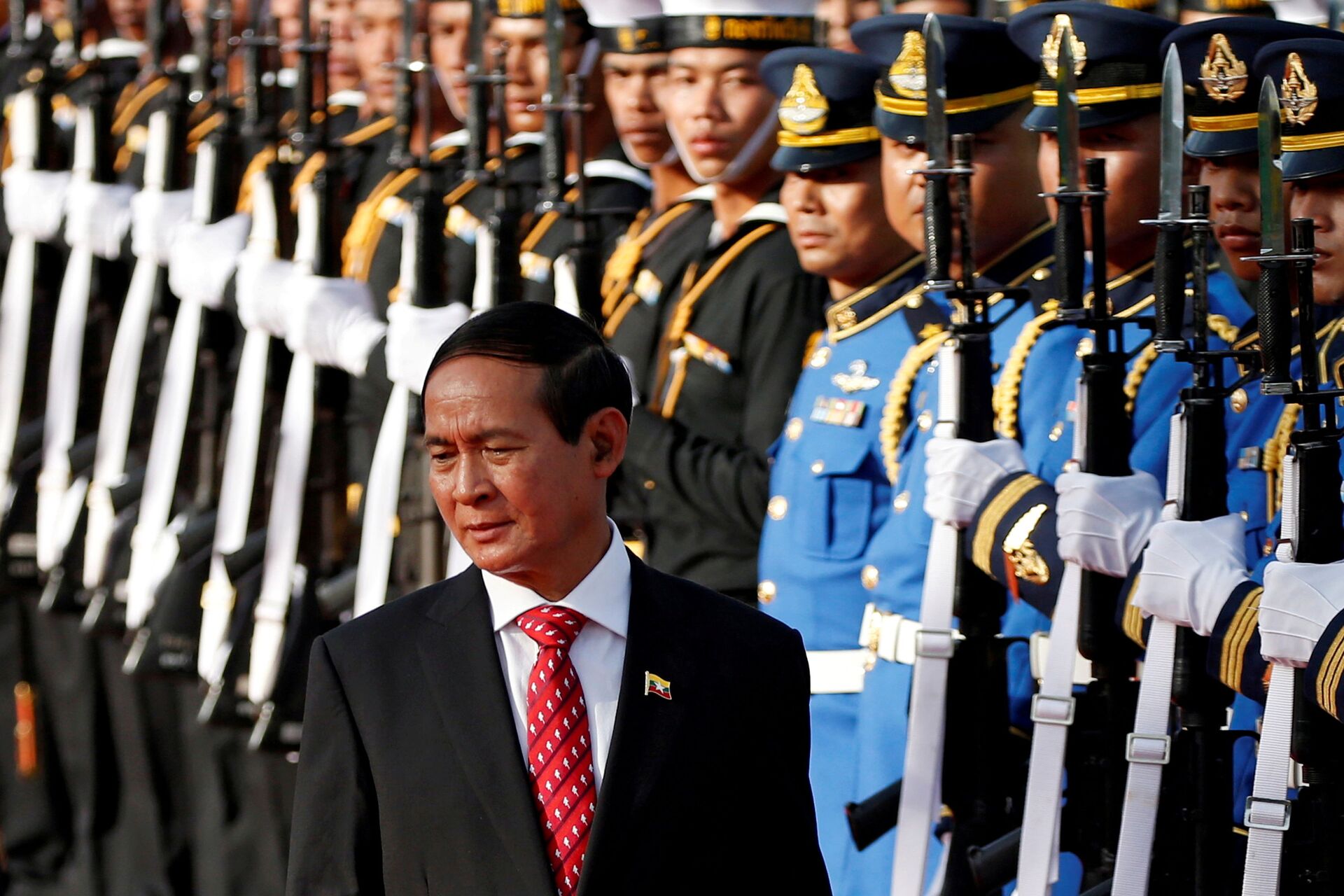 Aung Suu Kyi, now 75, is referred to as "the Lady" at home, and remains wildly popular among the Buddhist majority. In 2020, a survey by election watchdog the People's Alliance for Credible Elections, showed 79 percent of people had trust in Aung San Suu Kyi - up from 70 percent the year before.