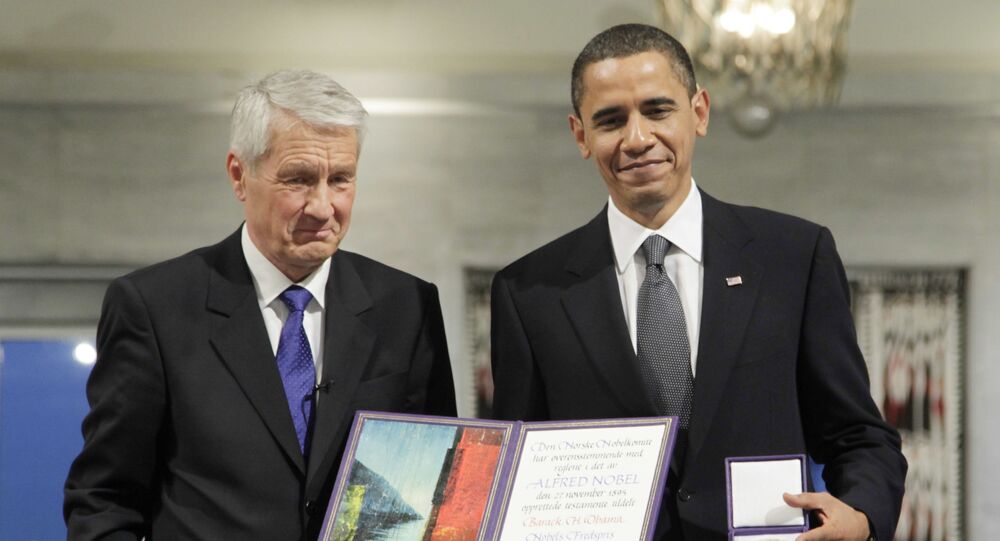 The Nobel Peace Prize was created in 1901 and has been awarded every year since, even if there have sometimes been few obvious contenders. This year it has been won by the World Food Programme.

The World Food Programme was awarded the 2020 Nobel Peace Prize on Friday, 9 October, for feeding millions of people around the world - in other words, for doing their job.

Supporters of US President Donald Trump have taken to social media to criticise the WFP winning it and Fredrik Heffermel, a Norwegian lawyer and critic of the whole process, was quoted on RFI saying: "We recognise the great value of the World Food Programme but the 2020 prize is much less ambitious than Nobel's idea of ‘conferring the greatest benefit on humankind'."

But has there really been a truly deserving winner since 1998 when David Trimble and John Hume shared the award for successfully bringing to an end The Troubles in Northern Ireland?

We are deeply humbled to receive the #NobelPeacePrize. This is an incredible recognition of the dedication of the @WFP family, working to end hunger everyday in 80+ countries.

Thank you @NobelPrize for this incredible honor! pic.twitter.com/bHcS0usWQa

​Among others whose efforts led to concrete peace were US Secretary of State Henry Kissinger and Vietnamese leader Le Duc Tho (1973) for the Paris Agreement which eventually led to the end of the Vietnam War, Menachem Begin and Anwar Sadat (1978) for agreeing peace between Israel and Egypt and Nelson Mandela and F W de Klerk (1993) for peacefully bringing black majority rule to South Africa.

But at the other end of the scale, let’s take a look at some of the least deserving winners of the Nobel Peace Prize.

Does nothing and wins the Nobel Peace prize.

Brings peace between nations who were at conflict for decades but gets ignored.

You can hate Donald Trump all you like - but the Nobel Peace Prize is clearly a political joke.

In October 2009 - just nine months after his inauguration as President - Obama woke up to discover he had been awarded the Nobel Peace Prize.

Obama himself admitted he was "surprised" by the award and said he felt he did not deserve to be in the same company as "transformative figures" such as Nelson Mandela.

Nobel Peace prize is a meaningless joke. It is stained with a shameful history. Don't get too excited by it.

​The Nobel Committee awarded it to him "for his extraordinary efforts to strengthen international diplomacy and cooperation between peoples" but it was difficult to see what great diplomatic achievements Obama had accomplished.

One of his campaign promises was to close the Guantanamo prison camp - where dozens of people were being held without trial after the US invasion of Afghanistan - which he said was a "sad chapter in American history".

Yet Obama left office in January 2017 with Guantanamo still open and 40 people still held there, having not been convicted of any offence.

So Nobel Peace Prize for Tedros is a possibility..Peace Prize is such a joke especially after Obama awarded to himself

​In 1991 Burmese opposition leader Aung San Suu Kyi was given the prize for her “non-violent struggle for democracy and human rights.”

She became State Counsellor - the de facto leader - of Myanmar in 2016 and has been heavily criticised in the last three years for her inability or unwillingness to stop human rights atrocities against the Muslim Rohingya people in the west of the country.

Thousands of Rohingya have been killed by Buddhist government soldiers and militiamen and tens of thousands have fled to neighbouring Bangladesh.

Nobel Peace Prize is a joke, something that couldn't be given to Mahatma Gandhi but could be given to everybody else.

​In November 2018 Amnesty International expressed their “profound disappointment” in her and stripped her of a human rights award.

In 2017 the International Campaign to Abolish Nuclear Weapons won the prize, despite having failed to convince any of the world’s nations to give up nuclear weapons.

Four years earlier the Organisation for the Prohibition of Chemical Weapons were given the bauble, despite any concrete achievements.

Last year Ethiopian Prime Minister Abiy Ahmed won the award for resolving a border conflict with neighbouring Eritrea but in the last few months Mr Ahmed has been heavily criticised for his handling of the country’s ethnic tensions, especially by leaders of the Oromo community.

​But it is not just recently that the Nobel Peace Prize has been devalued.

Some of its earliest winners were given it despite their achievements in the area of peace being somewhat questionable.

In 1903 William Cremer won the prize for setting up something called the Inter-Parliamentary Union, which was basically a talking shop for politicians.

It would be a shame if Donald Trump saw this in a bunch of retweets.

A decade later the Austro-Hungarian Empire - along with Germany and the Ottoman Empire - went to war with Russia, France, Britain and Italy.

So much for pacifism.

I am delighted the United Nations World Food Programme has been awarded the Nobel Peace Prize.

The women and men of @WFP brave danger & distance to provide life-saving help to those most vulnerable and in need.

I’m proud of and grateful for their courage & determination. https://t.co/vYMnaKlBYl

​In 1933 Sir Norman Angell, a British Labour MP, won the prize for writing another anti-war book, The Great Illusion.

During the war - perhaps not surprisingly - the Nobel Peace Prize was not handed out but in 1949 the committee was back in business, giving its highest accolade to Lord Boyd-Orr, a Scottish peer who chaired a toothless organisation called the National Peace Council.

Why don’t they just give Obama another #NobelPeacePrize since the whole thing has been made into such a joke anyway?

​And in 1954 the Office of the United Nations High Commissioner for Refugees (UNHCR) - which had been set up three years earlier to help refugees - was given the prize for carrying out its raison d’etre.

Seventy years later the Nobel committee is still giving the peace prize to UN agencies for doing their job.