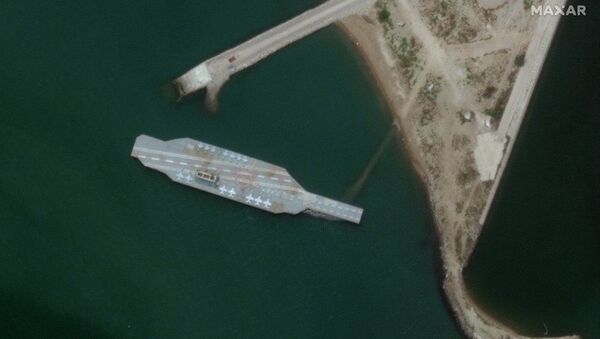 Ilya Tsukanov
All materialsWrite to the author
The Islamic Republic has accumulated a vast arsenal of ballistic and cruise missiles, most of them domestically sourced. Earlier this month, on the eve of Joe Biden’s inauguration, the country staged large-scale missile drills in southeastern Iran and the northern Indian Ocean simulating large-scale combat against enemy naval forces.

Despite its size, technological capability, and firepower, the United States Navy – the primary means by which Washington projects power abroad, is no longer an existential threat to Iran thanks to Tehran’s large missile deterrent, Gen. Rahim Noei-Aghdam, commander of the Islamic Revolutionary Guard Corps’ Hazrat Zeinab military base, has indicated.

“If once the US presence in the international waters near Iran was considered a threat to the country, today, thanks to our deterrent power and surface-to-surface, surface-to-air, surface-to-coast, coast-to-coast, coast-to-sea, and sea-to-sea missiles, we have the ability to destroy American ships,” the commander said, speaking to the Mehr News Agency on Monday.

“In contrast to the American forces in West Asia, which are unable to act, the intelligence, mobility, fighting, power, strength, cohesion, unity, and morale of the forces of the Resistance Front, especially the armed forces of the Islamic Republic of Iran, are well known,” Noei-Aghdam added.

The "Resistance Front" is a reference to the loose political alliance also known as the Axis of Resistance, which includes Iran, Syria, Iraq’s Popular Mobilisation Forces, and the Lebanese political and militant group Hezbollah. All of these forces have cooperated in recent years to combat a range of threats, from jihadist militias including Daesh (ISIS)* and al-Qaeda* in Iraq and Syria to Israeli troops in Lebanon.

Earlier this month, as Iran prepared for large-scale ballistic and cruise missile drills off south-eastern Iran and the northern Indian Ocean, a senior Revolutionary Guard commander boasted that Tehran was in “full control” of the Persian Gulf and prepared to defend all its coastal territories. The drills saw missiles being firing from ships and coastal batteries, the operation of a new submarine, and the use of a variety of combat and reconnaissance drones. Days later, Iran test fired a ballistic missile, hitting a seaborne target over 1,800 km away.

Search about this missile! "Khorramshahr 2", which has a cep of 0.5 meter (the most accurate missile made by Iran, of course among the missiles introduced in public!!) There's a rule in Iran... Nothing is showed in the media or public unless it's needed for deterrence! pic.twitter.com/PzY4r84vV7

Iran has expressed cautious optimism over the change of power from Donald Trump to Joe Biden amid the latter’s apparent readiness to see the US rejoin the Joint Comprehensive Plan of Action nuclear treaty. Trump unilaterally pulled the US out of the agreement in 2018, with the next two years seeing a dramatic ratcheting up of tensions between Tehran and Washington. A series of tanker sabotage and seizure incidents, the destruction of a stealthy US spy drone over the Persian Gulf, the assassination of a senior Iranian military commander in Iraq, and Iran’s missile barrage of retaliation against a pair of US bases repeatedly pushed the two countries to the brink of war.

Iran Will Reportedly Issue Seven Demands to President Biden Before Re-Entering Nuclear Deal Talks
Last week, French media have reported that Biden staff and Iranian officials have been talking about the terms of a US return to the JCPOA for weeks. On Sunday, a Kuwaiti newspaper reported, citing an Iranian government source, that Tehran has seven separate preconditions for the US, including the total lifting of sanctions, compensation for financial losses incurred under the Trump sanctions, and a guarantee to leave side issues –including Iran’s missile programme and support for allies abroad, off the table.