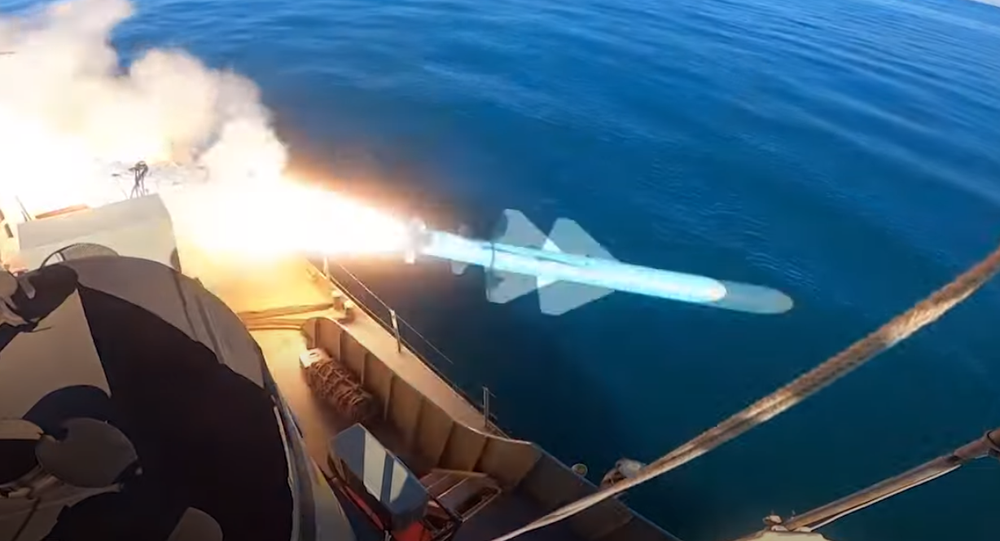 On Monday, Islamic Revolutionary Guard Corps Navy Commander Alireza Tangsiri stated that Iran was in “full control” of the Persian Gulf and prepared to defend all its coastal areas. His remarks came after weeks of heightened tensions between Tehran and Washington.

Iranian media has released photos and video materials showing the firing of cruise missiles during Thursday’s Eqtedar (translated as ‘Power’) drills in south-eastern Iran and the northern Indian Ocean.

Footage shows cruise missiles being fired from both ground-based mobile coastal defence systems and from on board Iranian Navy vessels, and the destruction of target buoys being monitored from the air.

Along with the cruise missiles, media released images of the Fateh (‘Conquerer’), an Iranian-made semi-heavy submarine, taking part in the drills, and firing its torpedoes for the first time. The diesel electric sub, the first of a series of three vessels, was commissioned in 2019, and is said to be equipped with both torpedoes and cruise missiles, as well as sea mines, and to be decked out with a range of advanced sensors and guidance systems using 100 percent domestically sourced technology.

Along with the missiles, coastal defence platforms, ships, and subs, two-day drills were said to have seen the use of various classes of Iranian-made combat and reconnaissance drones.

Also on Thursday, the Navy announced that its anti-submarine warfare (ASW) helicopters had detected and tracked a foreign submarine said to be approaching the war game area in the Indian Ocean, with the sub said to have left the area after being detected and contacted.

The Navy did not specify to which foreign power the sub belonged, although Iranian news agency Tasnim suggested it may have been the USS Georgia, the Ohio-class ballistic-missile submarine recently sent to the Persian Gulf amid heightened tensions between Tehran and Washington.

Footage of the incident shows the partially submerged foreign sub diving after being contacted by an Iranian ASW helicopter pilot.

🔴A submarine attempts to get close to Iranian Navy Exercises & is warned to not approach.

"This is my final warning, leave the area immediately & change direction 180 degrees"#IRAN pic.twitter.com/WDtcVhUadX

In a related development, earlier this week, Iran’s Navy took delivery of the Makran, a new homegrown helicopter carrier, and the Zereh (‘Armour’) missile corvette.

Video:#Iran Navy fleet in the Sea of Oman took delivery of a new homegrown helicopter carrier “Makran” as well as a missile-launching warship “Zereh” (Armor).

On Sunday, the commander of the Islamic Revolutionary Guard Corps Navy, Commodore Alireza Tangsiri, gave assurances that Iran had adequate resources to ensure “complete control” of the Persian Gulf region, and said all foreign vessels passing into the body of water through the Strait of Hormuz are closely monitored to prevent any violations of Iran’s territorial integrity.

Last week, Iran unveiled the existence of a new top-secret underground missile base belonging to the IRGC Navy equipped with missiles of various classes and ranges. IRGC Commander-in-Chief Hossein Salami said that the facility would help Iran to boost its “deterrence power” and protect “the territorial integrity and independence of the country.”

The region has seen regular outbursts of aggression since the Iranian Revolution of 1979, with the most recent coming in the wake of Washington’s 2018 withdrawal from the Iran nuclear deal. Since then, the Persian Gulf has seen multiple sabotage attacks against commercial vessels, tanker seizures and drone shootdowns, as well as threats by the US Navy to blow small Iranian gunboats approaching and “harassing” US warships out of the water.