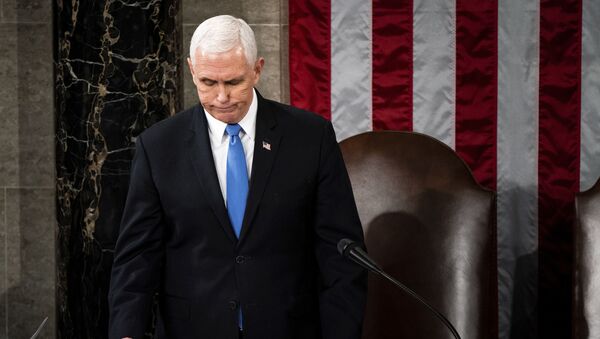 Oleg Burunov
All materialsWrite to the author
On Tuesday, Mike Pence voiced his opposition to invoking the 25th Amendment against President Trump, warning that using the legislation in such a manner would "set terrible precedent".

The Democratic-controlled House of Representatives has passed a resolution urging US Vice President Mike Pence to invoke Section four of the 25th Amendment to remove President Donald Trump from office for his role in the Capitol Hill riots.

The House passed the measure by a 220 to 205 vote on Tuesday. The legislation asks Pence to assume the role of acting president after declaring Trump "unable to successfully discharge the duties and powers of his office".

The move comes after Pence in a letter sent to House Speaker Nancy Pelosi on Tuesday expressed his opposition to invoking the 25th Amendment, warning her that using the legislation in such a manner would "set terrible precedent".

He underscored he does not believe that "such a course of action is in the best interest of our nation or consistent with our Constitution", and that he will not "yield to efforts in the House of Representatives to play political games".

"I urge you and every member of Congress to avoid actions that would further divide and inflame the passions of the moment. Work with us to lower the temperature and unite our country as we prepare to inaugurate President-elect Joe Biden as the next President of the United States. I pledge to you that I will continue to do my part to work in good faith with the incoming administration to ensure an orderly transition of power”, Pence pointed out.

His letter came as President Donald Trump made it clear he is not worried by efforts to invoke the 25th Amendment to remove him from office or attempts by House Democrats to initiate what may become his second impeachment.

"The 25th Amendment is of zero risk to me but it will come back to haunt Joe Biden and the Biden administration. As the expression goes, be careful what you wish for”, the US president said in a speech in Texas on Tuesday.

Referring to efforts by House Democrats to launch impeachment proceedings against him, Trump slammed it as a “hoax” and a “continuation of the greatest and most vicious witch hunt in the history of our country”.

According to him, it is “causing tremendous, anger, division, and pain, [...] which is very dangerous for the USA".

The developments come after Democrats in the US House of Representatives introduced a single article of impeachment against Trump for incitement of insurrection in the wake of the deadly Capitol siege on 6 January that claimed the lives of at least five individuals, including Capitol Police Officer Brian Sicknick.

The article itself stemmed from remarks by Trump at a “Stop the Steal” rally, when he called on his supporters to keep fighting to prevent the presidential election from being “stolen”.

The sole impeachment article was introduced in the congressional chamber after House Republicans blocked a request by Democrats to unanimously pass a resolution calling on Vice President Pence to invoke the 25th Amendment to remove Trump from office.

The US 25th Amendment — a 'Silver Bullet' Against Trump or a Red Herring?
Support for invoking the amendment, including from some Republicans, surfaced last week after the Capitol riot.

The impeachment measure states that Trump has “demonstrated that he will remain a threat to national security, democracy, and the Constitution if allowed to remain in office and has acted in a manner grossly incompatible with self-governance and the rule of law”.

While many have moved to support the idea of invoking the amendment, Trump ally Sen. Lindsey Graham suggested that such a move is not “appropriate at this point", considering the president has less than two weeks before leaving office.

“I'm looking for a peaceful transfer of power", he said, before also acknowledging Trump’s legacy was “tarnished” by the events that took place at the Capitol. Graham also indicated he had no regrets about supporting Trump during his presidency, despite being one of his biggest critics during the 2016 campaign.