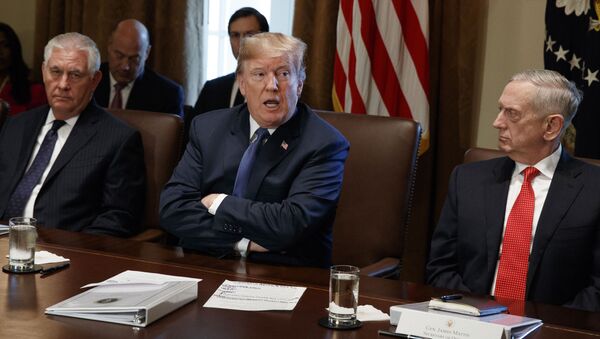 © AP Photo / Evan Vucci
Subscribe
Ilya Tsukanov
All materialsWrite to the author
James Mattis resigned from his post as secretary of defence in late 2018 after disagreeing with Trump’s Syria withdrawal plans. In late 2020, the president called Mattis the “world’s most overrated general” and said he “should have fired him sooner” after the former Marine Corps general urged Joe Biden to abandon Trump’s “America First” strategy.

Former Pentagon chief James “Mad Dog” Mattis has issued a scathing attack against President Donald Trump, blaming him for Wednesday’s violence at the US Capitol, which saw protesters storming the compound and seizing the Senate chamber as Congress moved to formally certify the Electoral College results confirming Biden’s victory.

“Today’s violent assault on our Capitol, an effort to subjugate American democracy by mob rule, was fomented by Mr. Trump. His use of the Presidency to destroy trust in our election and to poison our respect for fellow citizens has been enabled by pseudo political leaders whose names will live in infamy as profiles in cowardice,” Mattis said in a press statement late on Wednesday.

“Our Constitution and our Republic will overcome this stain and We the People will come together again in our never-ending effort to form a more perfect Union, while Mr. Trump will deservedly be left a man without a country,” the retired general suggested.

Mattis’ remarks were echoed by former Trump Joint Chiefs of Staff Chairman Joseph Dunford, who blamed the president for "setting the conditions" for Wednesday’s violence by “undermin[ing] a peaceful transition in accordance with our Constitution” and called the events at the Capitol “an outrageous assault on our democracy.”

Mark Esper, another former Trump secretary of defence, who was fired in November amid disagreements on the president’s Iraq and Afghanistan withdrawal plans, called Wednesday’s events “appalling and un-American” and added that he hoped the US military would “stay out of politics, and remain true to its sworn oath to support and defend the Constitution and the American people.”

Pence, Not Trump, Made Call to Deploy National Guard Against Mob Storming Capitol, Media Claims
On Sunday, Esper, Mattis, former Vice President Dick Cheney, and others penned an op-ed in the Washington Post urging acting Defence Secretary Christopher Miller and his subordinates to refrain from “any political actions that undermine the results of the election or hinder the success of the new team.”

Trump gave Miller Esper’s job after expressing frustration with the Pentagon’s stonewalling of his attempts to reduce US troop numbers overseas. In November, then outgoing US special representative for Syria Jim Jeffrey openly boasted about lying to Trump about the real troop numbers in Syria.

As for Mattis, Trump had quarrelled with the former defence secretary in November over an op-ed in Foreign Affairs magazine in which the retired general expressed hope that Biden would bin Trump’s "America First" policy, suggesting that “in practice, ‘America first’ has meant ‘America alone’.” Trump responded to the criticism by saying he should have fired Mattis long before he did.