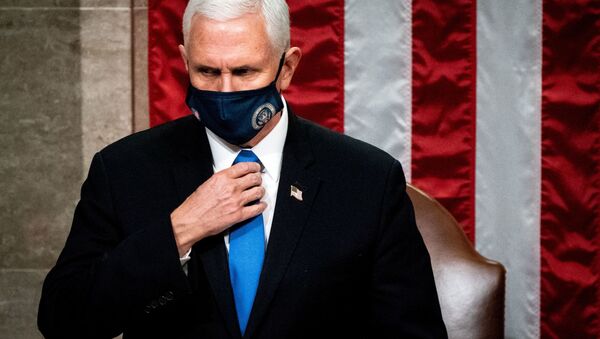 Svetlana Ekimenko
All materialsWrite to the author
As Congress convened to certify President-elect Joe Biden’s November victory, Trump protesters, convinced that the vote had been ‘fraudulent’, stormed the Capitol, unleashing chaos and violence, as regional police departments, reinforced by the National Guard, were called in to reestablish order and enforce an overnight curfew.

It was Vice-President Mike Pence and not President Donald Trump who approved the order to draft in the DC National Guard after pro-Trump protesters breached the Capitol on Wednesday, according to defence and administration officials cited by The New York Times.

The sources did not clarify why the order was not given by the President, who is still commander-in-chief, as they added that Trump had initially resisted requests to mobilise the National Guard.

​It was reported earlier that the Defense Department had denied a request from local officials for assistance from the National Guard to contain the mob that stormed the Capitol Building, destroying property and bringing to an abrupt recess congressional proceedings to certify the Electoral College vote tally in favour of President-elect Joe Biden. 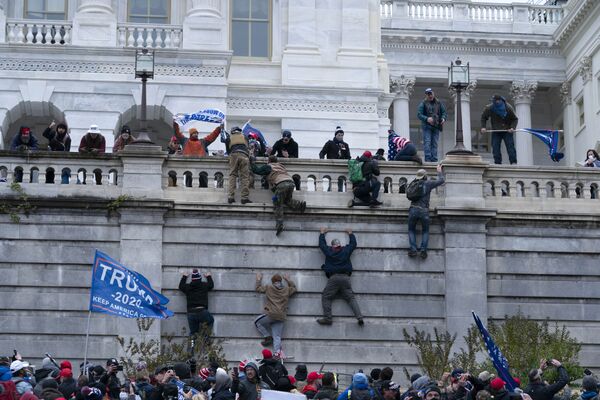 Supporters of President Donald Trump climb the west wall of the the US Capitol on Wednesday, Jan. 6, 2021, in Washington
© AP Photo / Jose Luis Magana

Four people died in the violence, with the Police Chief of Washington DC, Robert Contee, saying the dead on Wednesday included a woman who was shot by the US Capitol Police, as well as three people who died in “medical emergencies".

Intervention from the American attorney serving as White House Counsel for President Donald Trump, Pat Cipollone, among other officials, reportedly resulted in the National Guard being deployed late on Wednesday.

“Chairman [of the Joint Chiefs of Staff Mark] Milley and I just spoke separately with the Vice-President and with Speaker Pelosi, Leader McConnell, Senator Schumer and Representative Hoyer about the situation. We have fully activated the DC National Guard,” reads Miller’s statement.

Army Secretary Ryan McCarthy was cited as confirming that all 1,100 members of the DC National Guard had been mobilised to support the local police force, with several federal law-enforcement entities tasked with assessing “how a clearing operation may be conducted".

FBI agents in camouflage and bearing shields and machine guns were deployed to the Capitol grounds on Wednesday to boost the police presence on the scene and protect the building and the public.

At the request of US National Guard officials, New York Governor Andrew Cuomo will send 1,000 members of the New York National Guard to Washington for a period of up to two weeks, ahead of the inauguration of President-elect Joe Biden, he said in a statement Wednesday night.

Today, I'm ordering a citywide curfew for the District of Columbia from 6:00 p.m. on Wednesday, January 6, until 6:00 a.m. on Thursday, January 7. pic.twitter.com/lp6Pt3DcYC

​The mayor of Washington declared a public emergency on Wednesday night as the local police worked to secure the area around the Capitol.

“Everyone needs to clear the Capitol ground and remove themselves back to their homes, or wherever they’re staying, and let the police do their jobs,” Mayor Muriel Bowser was cited as saying on Wednesday evening. 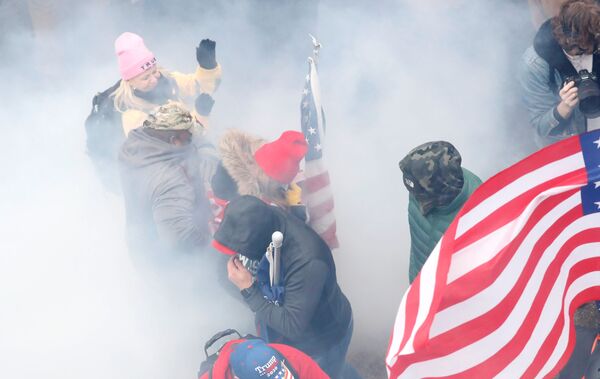 Pro-Trump protesters react amidst a cloud of tear gas during clashes with Capitol police at a rally to contest the certification of the 2020 US presidential election results by the US Congress, at the US Capitol Building in Washington, US, January 6, 2021. REUTERS/Shannon Stapleton
© AP Photo / SHANNON STAPLETON

An order extending the District of Columbia’s public emergency for 15 days was also issued, as it was underscored that protesters who converged on Washington “for the purpose of engaging in violence and destruction” had resorted to guns and chemical irritants.

“Their destructive and riotous behavior has the potential to spread beyond the Capitol,” says the order.

As the situation in Washington was taken under control, the joint session of Congress resumed certification proceedings, with the Senate and the House of Representatives rejecting objections to throw out Georgia and Pennsylvania’s electoral votes for Biden.

Statement by President Donald J. Trump on the Electoral Certification:

“Even though I totally disagree with the outcome of the election, and the facts bear me out, nevertheless there will be an orderly transition on January 20th. I have always said we would continue our...

​President Donald Trump for the first time publicly acknowledged his defeat in the 3 November election, vowing there would be an “orderly transition on 20 January”.

“Even though I totally disagree with the outcome of the election, and the facts bear me out, nevertheless there will be an orderly transition on January 20th,” Trump said in a statement posted to Twitter by his social media director.