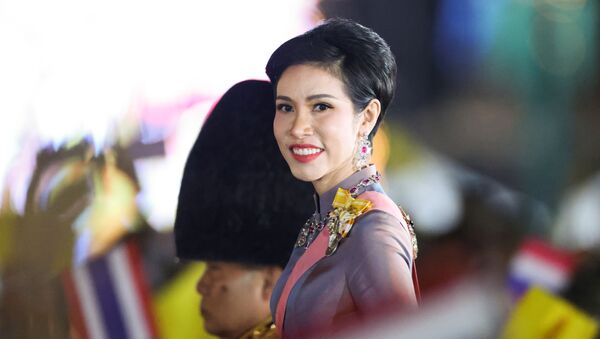 Aleksandra Serebriakova
Moscow-based Sputnik correspondent specializing in foreign affairs.
All materialsWrite to the author
Thailand's King Maha Vajiralongkorn raised some eyebrows last year when he stripped his mistress and secondary consort Sineenat Wongvajirapakdi of all titles just three months after her appointment. However, this September he changed his mind, and Sineenat promptly returned to his court.

Over a thousand photographs of the Thai King’s “Royal Noble Consort” Sineenat Wongvajirapakdi, many of them nudes, have been sent to prominent critics of the monarchy, sparking concerns about her enemies’ attempts to sabotage the woman’s position within the royal household after her purported return from prison this year.

🇹🇭#Thailand’s Royal Noble Consort Sineenat Bilaskalayani visited and presided over the merit of the king’s offering to the monks at Prathatkhaonoi Temple in Ban Kha District, #Ratchaburi.

​Sineenat, a 35-year-old Major General, was named King Maha Vajiralongkorn’s consort in July 2019, to serve as a concubine to the royal alongside his official wife Suthida Tidjai, who he married just several months before. Although the 68-year-old Vajiralongkorn had already tied the knot three times before marrying Suthida, his appointment of Sineenat as a secondary consort was something Thailand had not seen for nearly a century.

Just three months after, the mistress was, however, stripped of her ranks and reportedly sent to jail following accusations that she was disrespectful and misbehaving towards Queen Suthida by trying to promote her own “ambitions and aspirations” and being “disloyal” to the king,  the royal statement read.

But this September Sineenat, also nicknamed by some as Koi, made her way back to Thailand’s most privileged house after the Royal Gazette reported that the consort’s titles would be restored and no record would show that she had ever lost her military ranks or privileges. 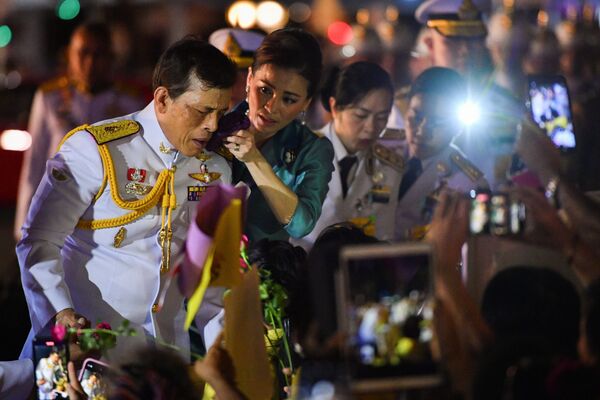 But not everyone was apparently cheering for her return, the Sunday Times suggests, citing an “intense rivalry” between Koi and Vajiralongkorn’s official wife, which prompted an “international campaign to humiliate her” by leaking her “sexually explicit” images to the public.

British journalist Andrew MacGregor Marshall, who has written a number of critical pieces about the state of the monarchy in Thailand, revealed on his social media that some of 1,443 of Koi’s pics, probably extracted from her previous phones, were forwarded to him back in August on an SD card contained in a letter.

“Most of the images are photographs she took of herself, and dozens of them are sexually explicit. It seems probable that she had taken explicit photographs of herself to send to Vajiralongkorn,” the journalist suggested.

Marshall said that he had received a parcel shortly before the mistress was released from prison and had rejoined the king, but decided not to make the photos public back then. However, he later decided to speak up on the matter, as it turned out to be that he was not the only one who had apparently received the controversial pics, some of which are now widely circulating online.

“Koi’s return was bitterly opposed by palace factions supporting Queen Suthida and Princess Bajrakitiyabha and it is highly probable the images of Koi were leaked in an effort to sabotage her return as Vajiralongkorn’s consort,” Marshall claimed in a tweet.

It cannot be said with certainty who was the anonymous sender and what exact goal this person or group of people were pursuing, but according to the journalist, the whole situation has underlined an “ugly power struggle in the palace due to Vajiralongkorn’s chronically complicated sex life”.

Japan-based Thai academic Pavin Chachavalpongpun, who is facing charges in Thailand for criticising the monarchy, also reportedly claimed that he had been one of the people in possession of the intimate pics.

However, the photographs are now starting to be shared by others. Pavin Chachavalpongpun commented on October 25 that he had also received them, and since then he has shared several of the images, although so far none of the most explicit ones. 13/15

Sineenat Wongvajirapakdi, born Niramon Ounprom, made a staggering military career before joining the court, according to her official biography. She has worked as an army nurse and Royal King’s guard, while also completing military training, royal bodyguarding and piloting. Her return to the court back in September was highly criticised and coincided with a wave of anti-monarchy protests in Thailand, with demonstrators calling to curb King Maha Vajiralongkorn’s powers, citing the arbitrariness of some of his moves and the need for wider political reforms.