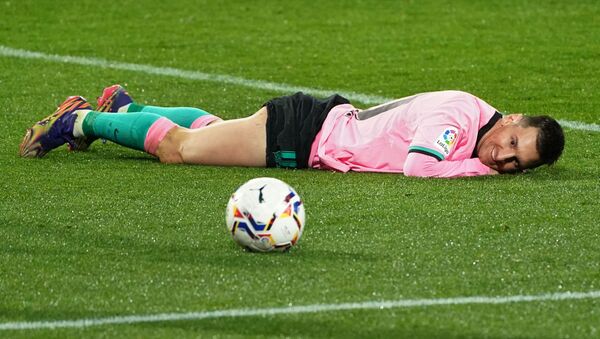 Kirill Kurevlev
Correspondent
All materialsWrite to the author
Legendary Brazilian football player Pele, now 80, made his debut at Santos football club in 1956, at the age of 15, and played for the club until his retirement from it in 1974, winning six Brazilian league titles. Pele held the all-time goal-scoring record for a single club with 643 goals made in 665 competitive matches for Santos.

Lionel Messi, 33, has beaten the world record for most goals for a single club in competitive matches, previously held by Pele, during the La Liga match against Real Valladolid, where he scored his 644th goal for Barcelona.

Messi's goal helped his team to a 3-0 win against Valladolid. The Argentine also tallied his first assist of the season, setting up Clement Lenglet.

On Saturday, Messi matched Pele's famous record with a goal against Valencia, achieving this milestone with a diving header immediately after his penalty was saved by Valencia's goalkeeper.

No one has scored more goals for a single club than Lionel Messi 👑 pic.twitter.com/99z4m9tJAS

The Argentine football player made his debut for Barcelona at the age of 17 in 2004, and it took him 748 matches to score his 643 goals for the club.

Pele congratulated Messi on Sunday for the record-breaking score, paying him tribute for his loyalty to one club.

News broke earlier this year that over the summer Messi had notified Barcelona of his desire to leave Barcelona after its recent Champions League failures, but later decided to stay with the club.