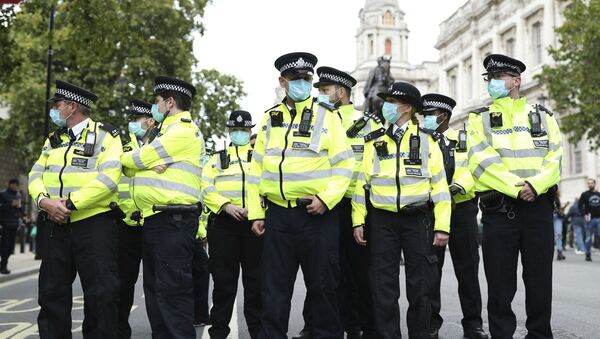 Svetlana Ekimenko
All materialsWrite to the author
Saturday witnessed thousands of Londoners forming enormous queues at train stations, as people hurried to flee the British capital before midnight ahead of looming new "Tier 4" restrictions, announced by Prime Minister Boris Johnson a day earlier due to a new strain of COVID-19, which is believed to be more contagious.

Police are being deployed to railway stations to discourage non-essential travel during the holidays and to deal with the fallout from the UK government’s last minute U-turn on Christmas gatherings during the coronavirus pandemic.

Transport secretary Grant Shapps said the country’s Transport Police were “being deployed to ensure only those who need to take essential journeys can travel safely”, and urging people not go to stations unless they were permitted to travel, reported The Times.

While ruling out roadblocks or the routine stopping of vehicles, warnings have been issued that extra officers will be deployed at railway stations and police will fine people for travelling in and out of tier 4 areas without a reasonable excuse.

“It is incredibly important that people follow the guidance. Stay at home. Our focus must be stopping the spread of this virus, protecting lives and our NHS,” Shapps was quoted as saying.

On the checking of vehicles, National Police Chiefs’ Council Chair, Martin Hewitt, said: “We will step up visibility to encourage the public to follow the rules. There is no intention to establish road blocks or routinely stop vehicles.”

'Mutant Virus' That Cancelled Christmas: What is Known About 'New Variant' of COVID Spreading in UK
Chairman of UK Network Rail Sir Peter Hendy added: “At stations we will be deploying staff, announcements will make the law clear and extra officers are in place to ensure only essential journeys take place.”

In Scotland, where the first minister, Nicola Sturgeon, had earlier announced severe lockdown measures on Saturday, including a “strict travel ban” to or from other parts of the UK, police will patrol the border to enforce the measures.

According to Iain Livingstone, chief constable of Police Scotland, “highly visible patrols” would “deter anyone who might be considering breaching travel restrictions”.

Boosted police numbers come as railway stations descended into chaos earlier after Prime Minister Boris Johnson announced that as of Sunday, Tier 4 restrictions were to be imposed for London and the southeast, the south-east and east of England, amid a surge in COVID-19 cases and alarm triggered by a new strain of the virus spreading rapidly in the region. 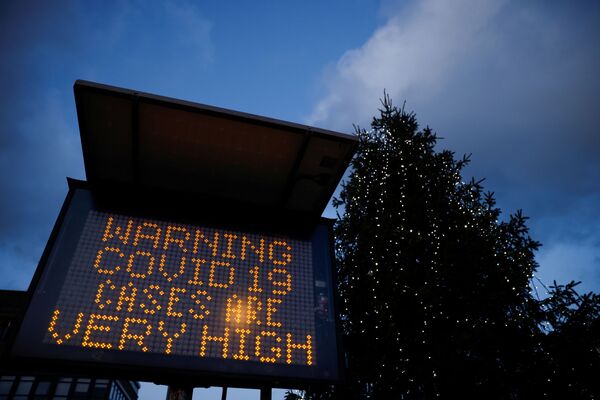 While previously there were plans to allow cross-tier travel for household mixing for a period of up to five days during the Christmas holidays, the sudden U-turn by the UK government indefinitely prohibits non-essential travel out of the area as well as household mixing, including throughout the festive period.

​By 7pm, all online tickets from several London stations including Paddington, King’s Cross and Euston had been sold out.
Heaving crowds could be seen waiting to board trains to Leeds at St Pancras station, according to footage posted on social media.

London mayor Sadiq Khan slammed the scenes at London railway stations as a “direct consequence of the chaotic way the announcement was made”. However, he called on residents of the capital to observe the new stringent rules.

“You may be taking that virus with you from London to your mum, dad, elderly relations… We now have a vaccine being rolled out, you can see light at the end of the tunnel,” said Khan.

The country’s railway chiefs similarly blamed the social distancing collapse on the government’s announcement, which had caught people unawares.

“We appreciate some of our services out of London on Saturday evening were much busier than normal and we are sorry for any inconvenience and discomfort caused to passengers. Clearly, the introduction of Tier 4 led to an unexpected surge in passengers wishing to travel before the further social and travel restrictions are introduced,” said East Midlands Railway.

According to Edmund King, president of the Automobile Association (AA), within 90 minutes of Boris Johnson’s announcement of the looming new restrictions, people started hiring cars and taxis to try to escape London.

“There are certainly elements of an exodus… It is almost like a wall is coming down around London and the southeast and some people are scrambling to save their Christmas,” the Daily Mail quoted him as saying.

As enforcement of new travel restrictions in London was downplayed to alleviate tensions, Health Secretary Matt Hancock told the BBC’s Andrew Marr Show that police were not being called upon to turn back drivers trying to leave the Tier 4 area.

Nevertheless, when asked if the police would stop people travelling, he responded by saying he had conferred with the home secretary and “the British Transport Police’s responsibility is to police the transport system”. He added: “But I hope that this will be done by consent.”

“The chief medical officer was absolutely clear that people should unpack their bags,” said the Health Secretary.

“The best gift that you could give somebody this Christmas is to stay at home and not transmit the virus,” Sky News quoted Hancock as saying.

Meanwhile as over 300,000 people live on the border of Tier 4, concerns have been raised whether the virus can be contained in the southeast, writes The Times.

According to the outlet, 346,600 people live within a kilometre of the demarcation between the top tier and Tier 2 areas of the southeast. In the latter, the hospitality sector remains open.

Under tier 4 restrictions, non-essential shops, hairdressers, and leisure and entertainment venues must close. While a new “stay at home” message is introduced, all people who need to travel for education or childcare are exempt, and exercise is unlimited.

In circumstances where people cannot work from home, they will be able to travel to work.

However, under the measures, households are not allowed to mix. One person is allowed to meet with one other person outside in a public space. So-called ‘support bubbles’ and those meeting for childcare are exempt. Those who are deemed ‘clinically vulnerable’ should not go to work and should try to remain at home if possible.

Tier 4 residents must not stay overnight away from home, and cannot travel abroad, which means that throughout the Christmas holidays, in London and the south-east, people must stay at home and must not meet up with other households. 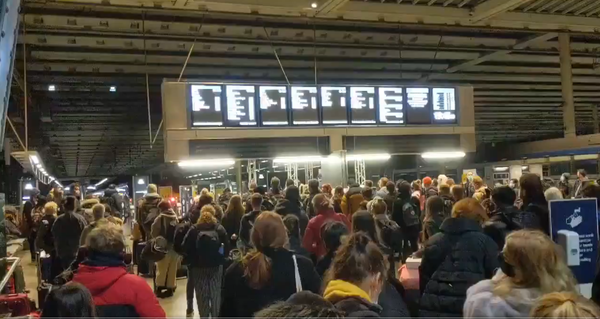 A huge crowd in London tube after new pandemic restrictions were announced by the UK government.
© Photo : RaptorsFury

This comes as in the rest of England, the window for multiple households meeting has been reduced from a five-day window between 23 and 27 to just Christmas Day.

The reason for the government’s change of plan is a new strain of the virus, dubbed ‘VUI 202012/01', that appears to be no more lethal than the original Sars-CoV-2 but is much more transmissible.

The name is derived from "Variant Under Investigation" and according to the first evaluations, the strain has a higher level of contagion.

On Saturday, the WHO confirmed with a message on Twitter that it was in "close contact" with the UK health authorities over the issue.

We’re in close contact with UK 🇬🇧 officials on the new #COVID19 virus variant. They’ll continue to share info & results of their analysis & ongoing studies. We’ll update Member States & public as we learn more about the characteristics of this virus variant & any implications.

​According to Patrick Vallance, the British government’s chief scientific adviser, the strain “moves fast and is becoming the dominant variant”, causing over 60% of infections in London by December.

Susan Hopkins, of Public Health England, said that the variant was identified “in the middle of October from a sample taking in September”.

According to Hopkins, officials first became concerned when “in early December while we were trying to understand why Kent and Medway continued to increase despite the national restrictions we found a cluster that was growing very fast and that had spread from the south of England into London and parts of Essex”, reported the BBC.

European nations have responded by banning flights from the UK. Ireland, Germany, France, Italy, the Netherlands and Belgium are all halting flights.

Monday’s EU meeting will be discussing a coordinated response to the developments.