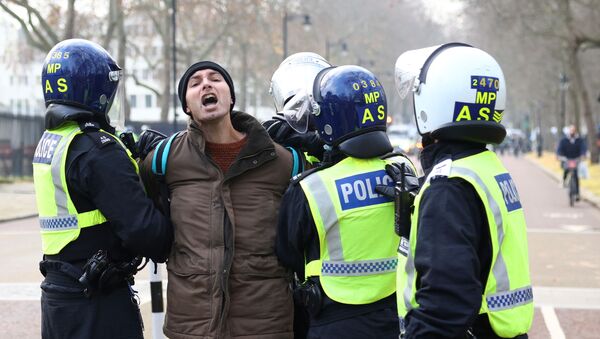 © REUTERS / Henry Nicholls
Subscribe
Mohamed Elmaazi
All materialsWrite to the author
The police in the United Kingdom have come under criticism amid what many perceive to be increasingly draconian powers being used against protesters, in particular Extinction Rebellion and Black Lives Matter.

Kevin Blowe co-founded the Network for Police Monitoring (Netpol) in 2009 and has been its paid coordinator since 2015. Mr Blowe describes for Sputnik the new and expansive powers that police departments are demanding from the UK Home Office and the rule changes restricting the right to protest that may come into effect in 2021.

Sputnik: Describe the new rules regarding protest that the Home Office and police are proposing to implement in 2021.

Kevin Blowe: The government plans, as we first reported on in November, a “Protection of the Police and Public Bill” somewhere around April 2021; it will involve new legislation to amend the current Public Order Act. The police, who have been lobbying the Home Secretary for these changes, are asking for three things that we know about so far.

They want more stringent powers to impose conditions of a static assembly. They want the wording of these powers amended so that restrictions are no longer triggered by “serious disruption to the life of the community” but for “significant disruption”, which is a much lower threshold. Finally, they want new grounds for using stop and search powers in order to “prevent significant disruption”, which could include searches for items that protesters could potentially use for direct action or civil disobedience, such as D-locks or climbing equipment.

Sputnik: What are your concerns regarding these new rules?

Kevin Blowe: These are not a minor tidying up of legislation. Currently a rally or picket does not require prior notification to the police, unlike a protest march. The police have powers to limit a static protest’s numbers and duration, but are able as part of the requirement for notification to prohibit a demonstration from entering any specified public place. Changing the law to prevent a static assembly from taking place in a particular area – say, for example, the whole of London – is a preventive ban in all but name. Making it possible to use these powers because of ‘significant’ rather than serious disruption is an invitation for the police to use them far more often.

As for the proposed new stop and search powers, they are likely to encourage front-line police officers to believe they can search everyone even vaguely associated with a particular protest, based on a view that its organisers lack legitimacy and are liable to encourage disruption. It is wholly disproportionate. As the United Nations Human Rights Committee highlighted in September in its updated guidelines on the right of peaceful assembly, “the mere fact that authorities associate an individual with a peaceful assembly does not constitute reasonable grounds for stopping and searching them”. If this new power is introduced, we fear a return to mass searches of almost anyone perceived as a potential protester, just as Kent Police officers did – completely unlawfully – at Kingsnorth Climate Camp back in 2008.

Sputnik: How are they justifying the need for these changes to the right to protest?

Kevin Blowe: This is overwhelmingly about the Metropolitan Police losing a legal challenge after the October 2019 Extinction Rebellion protests in London, when the High Court ruled that its attempt impose a blanket conditions to prohibit various XR protests across the whole of London were unlawful. In the aftermath, Deputy Assistant Commissioner Laurence Taylor was quoted as identifying these “asks in relation to the legislation” and a year on, this had translated into the Home Secretary Priti Patel ferociously denouncing Extinction Rebellion at the Conservative Party conference in September.

New COVID-19 Lockdown Offence Will Only Make Things Worse in England, Warns Police Monitor
To a certain extent, it is also about this summer’s Black Lives Matter protests too, which Patel also condemned in September. Back in 2019, a police source told the Guardian that the government wanted to see the police “clearing the streets” and policing that is “more robust earlier and more often.”

In our view, the Guardian’s source was projecting: this is far more about what senior levels of policing want. Smarting from the criticism of their handling of protests in London over the last year, they want to have the power to show they can crack down when protesters return properly to the capital’s streets in 2021.

Kevin Blowe: This isn’t about emergency legislation to deal with the coronavirus pandemic. It is entirely about extra police powers for use against expected opposition in different forms in Britain to the next, far worse emergency – rich nations abandoning the global South and closing their borders to much of the rest of the world in response to the impact of worsening climate change.

The proposed amendments to public order legislation next year are likely to result in even more aggressive police tactics and in turn, to justify more surveillance on campaigners. Rather like the emergency coronavirus powers brought in this year, they are about treating a social, economic or health crisis solely as a matter of maintaining public order. This is, after all, why the police exist.

Sputnik: What would you suggest the government do instead of these current proposals?

Kevin Blowe: In the face of incremental changes to the law fuelled by a draconian, politically-motivated crackdown, we need a clear reminder that the police still have a legal duty to both facilitate and safeguard our rights. The Human Rights Act can provide some degree of redress months or sometimes years after our rights are trampled on, but Netpol is currently arguing for stronger protections and a Charter of Freedom of Assembly Rights.