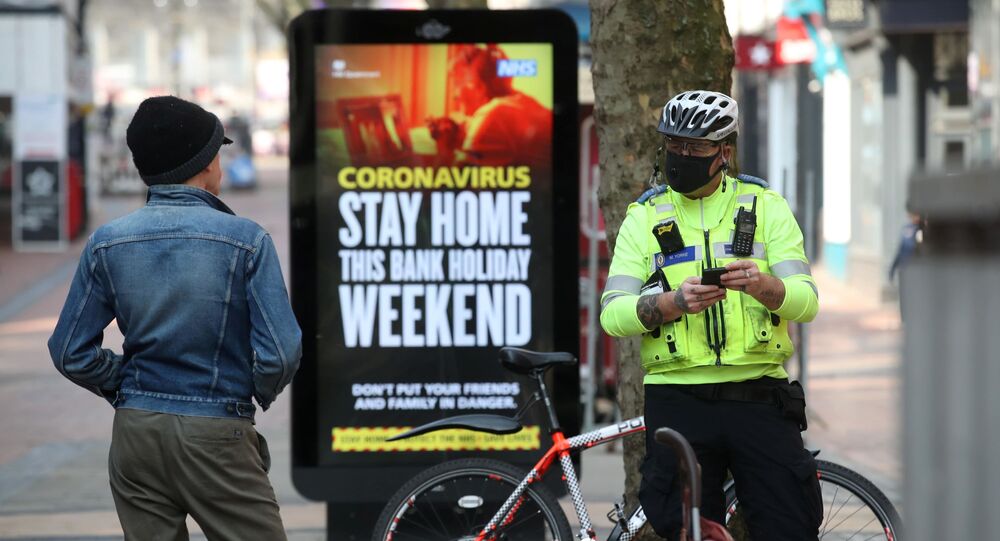 It is now a crime in England for someone to "be outside of" their place of residence during the COVID-19 emergency period "without reasonable excuse". The government argues that this amendment clarifies the existing rules, but experts say that the change creates an additional criminal offence.

Kevin Blowe has been an active campaigner for the east London police monitoring and anti-racist group, the Newham Monitoring Project, from 1990 to 2015. He co-founded Network for Police Monitoring (Netpol) in 2009 and has been its paid coordinator since 2015.

He explains why he thinks the amendments to the "lockdown" law, which were passed on 22 April with very little media attention, will lead to more confusion and arbitrary police action.

Sputnik: What concerns do you have regarding the latest amendment to England's emergency lockdown regulations?

Kevin Blowe: The changes that have been made to health protection regulations were introduced with absolutely no external scrutiny and because they slipped out quietly, they were almost completely ignored by the media.

Previously, it was a criminal offence to ignore directions from a police officer to return home if you had left without a “reasonable excuse”.

However, the Home Office has created a new criminal offence by changing the wording of this regulation to say, “during the emergency period, no person may leave or be outside of the place where they are living without reasonable excuse.”

Sputnik: Is this really any different to saying you can’t leave the house without a reasonable excuse?

Kevin Blowe: It is different because what has been described as a “clarification” is, in my view, rather more of an attempt to provide a retrospective justification for many of the fines for breaches of lockdown regulations. We suspect in a number of cases, fines were issued without justification.

In doing so, the government has created a situation where measures to restrict freedom of movement are either unenforceable – how is a police officer supposed to know whether a person left their home with a reasonable excuse but then remained outside without one? – or more likely, liable to be implemented in an entirely subjective and arbitrary way, based on the mood and biases of the officers you are likely to encounter on the streets.

In any event, the list of “reasonable excuses” for leaving home was never meant as an exhaustive one: after all, government’s advice has changed over the course of the last month. The problem is that the police started off enforcing the lockdown in a particularly rigid way and after there was a public backlash, has been complaining that it was not their fault but the government’s.

Sputnik: Can’t we just trust the police to use their discretion?

Kevin Blowe: From the beginning, we have tried to remind the public and the media that policing within local communities is always open to abuse because officers are already given enormous powers to impose controls over our lives.

From counter-terrorism, dispersal, anti-social behaviour or stop-and-search powers, we also know racialised communities are targeted disproportionately: for example, between April 2018 and March 2019, there were 4 stop and searches for every 1,000 White people, compared with 38 for every 1,000 Black people.

It is naive, therefore, to expect that, uniquely, new discretionary powers to enforce physical distancing, or to detain, isolate and test "potentially infectious" members of the public, would somehow roll out without the same kind of abuse and discrimination.

When police stop or detain anyone, it is on the assumption that they are “criminals”, based on advice from a government that has tried hard to blame the public for the need to impose a lockdown in the first place. Anyone who has been on the receiving end of oppressive policing will know from bitter experience exactly what criminalising “anti-social behaviour” leads to.

Sputnik: How has the state been policing the pandemic in your opinion, and has it been different in different parts of the country?

Kevin Blowe: The policing of the pandemic has been, in my opinion, a massive case of the police failing to “read the room” of public opinion. It seems like years ago now, but unquestionably it was huge public pressure in March that forced the government to take action in the face of fears about tens of thousands of deaths.

However, Boris Johnson tried to explain his final reluctant decision to impose lockdown measures by talking quite explicitly about how he did not trust people to follow the rules. He said they seemed “to go against the freedom-loving instincts of the British people” and the “ancient, inalienable right of free-born people of the United Kingdom to go the pub”.

British policing has followed the government’s line, because overwhelmingly the state and the police doesn’t trust us and never has. They view us with suspicion and in need of control, which for racialised and working class communities is already a familiar experience.

That is why we had the dire warnings by every police force in the first week and the huge number of fines in the first couple of days. New emergency powers might have been presented as health promotion and disease prevention measures, but they were interpreted as public order measures for imposing control. This, rather than trying to build on a community consensus in support of the need for temporary restrictions, has been dominant message ever since.

In some rural areas, it has also been about keeping out the apparently terrifying hordes of “outsiders”, especially in areas like Dorset and North Yorkshire, with little indication that there is any clear public health benefit. On a smaller scale, out on the streets of all of our towns and cities, we have only been able to capture glimpses of the police’s mistrust of the public, in the interactions that Netpol has tried to document and share.

As the vast majority of the public remain at home in defence of the NHS, senior officers and Police & Crime Commissioners are already talking up the threat of a huge crime wave and public disorder when the lockdown is over. In South Yorkshire, they have put together a “taskforce” made up of officers from riot units and serious and violent crime teams.

That’s how much they seem to trust us.

Sputnik: What changes would you like to see in how the state is policing the pandemic in the UK?

Kevin Blowe: Obviously we are all eagerly awaiting signs of hope about our release from quarantine measures. Until then, we want to see far less of the police leaping from “engagement” to “enforcement” at the first opportunity. We also want an end to the police’s active encouragement of the public to get in contact and denounce their neighbours for alleged infractions of the lockdown rules. This is completely toxic, divisive and undermines community bonds at a time when people are already fearful.

Both changes matter because eventually the number of Covid 19 cases will start to drop substantially and the crisis will seem like it is starting to recede.

At the point, the same divisive fears can also drive demands for the police to hunt down potentially sick people posing a "threat" to public health, in order to stop infections from returning and a second wave of quarantine measures. At this point there are less fines for leaving home without a reasonable excuse and more use of detention powers in a disproportionate and discriminatory way.

Our fear is that this will target communities seen as a "risk" either because of a higher incidence of positive testing (as they are more likely to include more front-line, healthcare or exposed workers) or, because of outright xenophobia, especially against the Chinese community (or those who “look Chinese”, racists don’t tend to differentiate).

We saw this after the 9/11 attacks and again after the 2005 attacks in London. We have to make sure it doesn’t happen again.