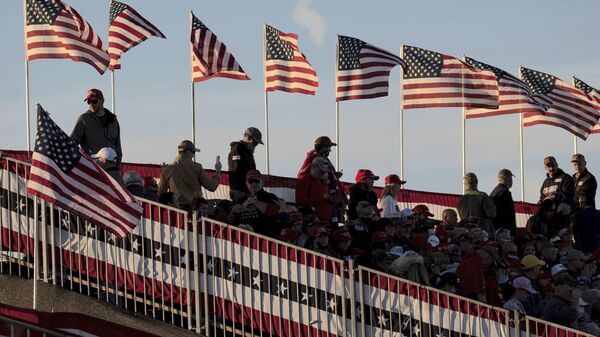 Aleksandra Serebriakova
Moscow-based Sputnik correspondent specializing in foreign affairs.
All materialsWrite to the author
On Monday, the Electoral College confirmed Joe Biden’s presidential victory by 307 votes. Following the news, the President-elect said that it was now “time to turn the page.” But Donald Trump’s silence on the issue and uncertainty around the future of the Senate’s balance suggest that his call to lay down arms might be slightly premature.

There were “no surprises” because electors did not dare to “go rogue” and challenge the results of the popular vote in their respective states, researchers said.

However, America’s election drama may be far from over, as US Congress is still to convene on 6 January to confirm the Electoral College results. During the meeting, Republican house representatives and senators will be able to question the electoral vote count based on Title 3 of the US Code, which establishes rules for such appeals, according to professor Dr. Phillip J. Van Fossen from Purdue University.

“Some House Republicans will challenge the results in January. I expect a few senators will join in, making it more contentious than 2016,” says John A. Tures, political science professor at LaGrange College. 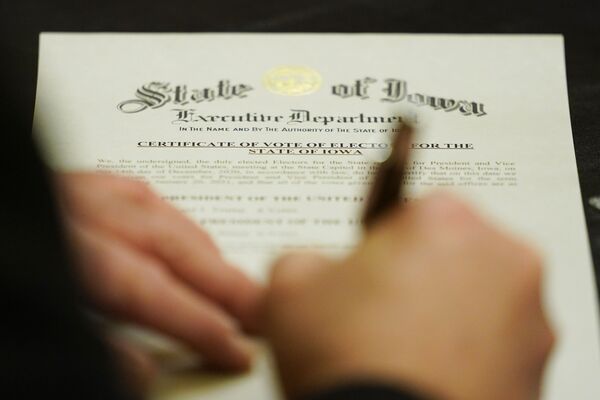 A member of Iowa's Electoral College signs the Certificate of Vote of Electors for the State of Iowa, Monday, Dec. 14, 2020, at the Statehouse in Des Moines, Iowa
© AP Photo / Charlie Neibergall

Even though it’s unlikely that Congress would support any Republican objections – bearing in mind the US Supreme Court’s recent rejection of the Texas litigation, which purported to oppose election results in four battleground states – there are some reasons why the GOP would continue backing Trump and some of his  election fraud claims. According to professor Cunningham, doing so effectively “establishes credibility with Trump voters as they [Republicans] will be looking ahead to the 2022 midterm elections and, eventually the 2024 presidential race.”

He doesn’t expect any “massive demonstrations” to take place across the country following the Electoral College meeting because protests to support Trump’s claims that the November election was rigged remained “relatively small and uneventful.”

But professor Tures doesn't agree – he argues that it’s still possible “there will be mass demonstrations, less organised by officials, but more deadly and with injuries” following the Monday vote and this could “continue past Inauguration Day.”

Something else to keep an eye on in American politics are the upcoming Senate run-offs in Georgia, where incumbent Republicans Kelly Loeffler and David Perdue face tough competition from Democratic challengers Reverend Raphael Warnock and Jon Ossoff. The outcome of the race will decide the balance of power in the US Senate and potentially the whole American system for years to come.

According to professor Sean P. Cunningham, the Senate runoffs are by far “the most interesting political battle in the country right now.”

“Georgia has been a reliably Republican state for several decades. Losing those seats would be an enormous blow for the GOP both in that state and nationally,” the scholar suggests. 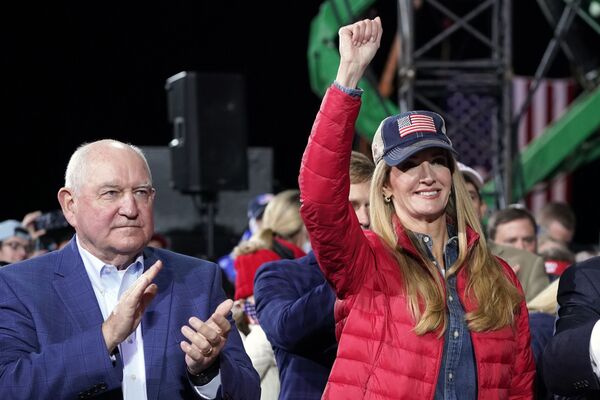 Meanwhile, Trump’s claims that the presidential election was “rigged” have only played into Democrats hands, Cunningham believes, by effectively threatening to undermine voter turnout among GOP supporters who lost faith in the system.

“If voters who believe the vote is already rigged choose to boycott, Democrats could pull off two enormous upsets,” Cunningham adds.

During November’s Senate election, Reverend Warnock outstripped Loeffler by seven points while Ossoff trailed Perdue by less than two (1.8). However, no candidates have passed the necessary 50% threshold to win a seat in the Senate.

According to George Washington University professor Gary Nordlinger, right now representatives from both parties are “literally going door-to-door in Georgia encouraging their supporters to vote.”

He believes that if the Republicans manage to keep control of the Senate, “Biden will need to compromise to get his appointees confirmed and policies enacted.”

But if this doesn’t happen, and both Loeffler and Perdue lose their seats, the Democratic party will take all three branches of government, meaning that it “will likely see a more aggressive push to reverse course and move to the political left,” says Cunningham.

“That would likely lead to greater polarisation and conflict at a time in which the nation desperately needs to come together in a spirit of unity and compromise,” he concludes.