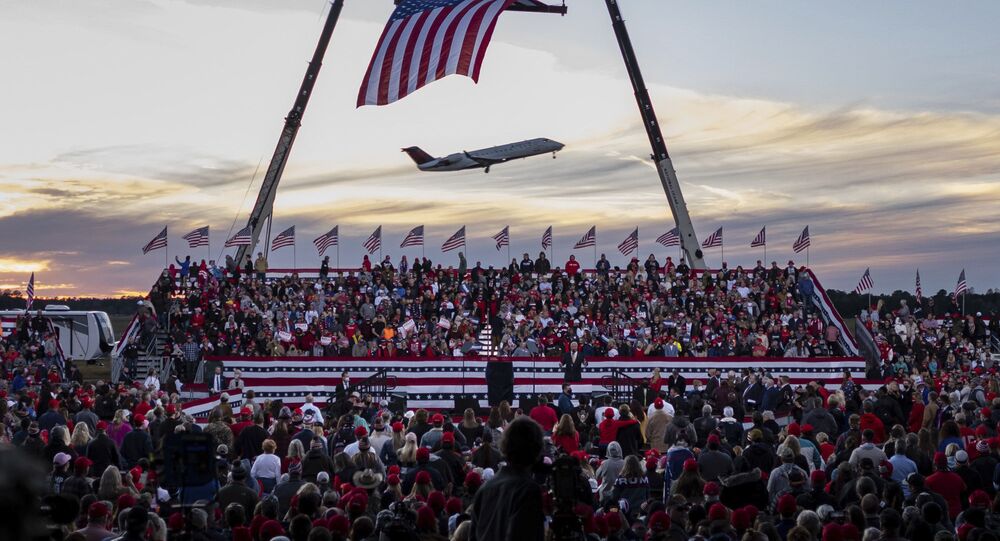 More than a month after the US presidential election, uncertainty still prevails as President Trump maintains that he has won the November vote. POTUS dismisses the results projecting Joe Biden as the next occupant of the White House, citing alleged election irregularities.

Georgia's Lieutenant-Governor Geoff Duncan told CNN’s Jake Tapper on Sunday that he was concerned that President Donald Trump’s claims on election fraud, that have been reiterated during his weekend rally in Valdosta, could be potentially damaging to Republicans who are facing the Senate run-offs in January.

“I worry that this continues fanning the flames around misinformation [and] puts us in a negative position with regards to the 5 January run-off. The mountains of misinformation are not helping the process – they’re only hurting it,” Duncan said during the programme State of the Union.

January Race for the Senate

Two Republican Senators, David Perdue and Kelly Loeffler, advanced to run-offs after failing to secure 50 percent support from Georgia voters during the November 2020 Senate Election. In the race, they are facing tough competition from Democrat challengers Jon Ossoff and the Reverend Raphael Warnock to determine the future of the Senate, and Duncan now fears that the Republican President is not helping the game, despite showing a staggering support towards the fellow GOP members at a Georgia rally on Saturday.

According to the official, it was not clear now whether enough Republicans would be willing to show up to the January vote amid the “chaos” Donald Trump’s ongoing claims of a “rigged” election have created.

© AP Photo / John Amis
Georgia Lieutenant Governor Geoff Duncan speaks to the media while seated in his office during the opening day of the year for the general session of the state legislature, Monday, Jan. 13, 2020 in Atlanta

Loeffler and Perdue were actually the ones who doubled down on Donald Trump’s claims about election irregularities and alleged fraud after the announcement of 3 November results. The senators also called for the resignation of Georgia’s Secretary of State Brad Raffensperger.

Trump has sent some strong criticisms to the fellow Republican official and Georgia’s Governor Brian Kemp, accusing them of failing to prevent “massive fraud” and alleged cheating during the election in the state, which the President maintains he had won.

Asked about Trump’s ongoing attack on Georgia’s Republican officials, Lt-Gov Duncan said that such behaviour was “absolutely” upsetting to him.

“It disgusts me. It’s not American,” he told CNN’s host. “It’s not what democracy’s all about.”

Governor Kemp certified Georgia's results projecting Joe Biden as winner on 20 November. This was followed by Kemp calling for statewide audits to prove the legality of votes casted, which concluded that the state’s 16 electoral college votes were grabbed by Joe Biden with a 0.2 percent lead over Trump.

Trump however maintains that a necessary signature verification procedure was not carried out to deem the election results legal.

On Saturday, President Trump urged Kemp to "immediately ask for a Special Session of the Legislature” to dispute the numbers, something the Georgia governor has apparently refused to do. Trump, meanwhile, called for the Republican Governor to “get tougher” in relation to propagated claims of vote irregularities.

The President’s call for a signature recount comes after Trump's legal team unveiled an alleged surveillance video, which they said was showing how “suitcases” of extra ballots were pulled out by Atlanta's Fulton County’s workers from under the table and then counted into the night when observers had already left the location.

The video “evidence” was, however, dismissed by Georgia Secretary of State Raffensperger, who so far has refused Trump’s calls for a new audit. Raffensperger maintains that Trump has lost the election in Georgia, which, he said, had left him “disappointed” as he had wished that Trump “would win”.