Oh, Come On! Mysterious Monolith That Appeared in Romania Has Now 'Vanished' 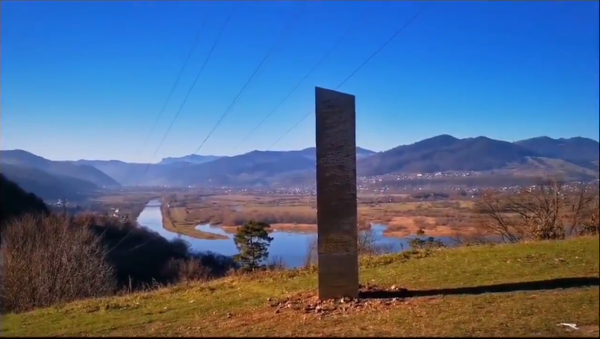 Max Gorbachev
All materialsWrite to the author
Nobody knows what it is or what it is made of or who put it there, but the enigmatic structure has drawn attention from all across the world and sparked wild theories of extraterrestrial civilisations trying to contact humans.

The year 2020 shows it still has plenty of surprises in store for us as the mysterious monolith that appeared just days ago in the north of Romania has now disappeared, local media reported. The shiny metal-like triangular structure was spotted on the Batca Doamnei Hill near the Petrodava Dacian Fortress last week.

​However, on Tuesday local media reported that the monolith had disappeared.

The structure in Romania appeared days after a similar monolith appeared and then vanished in a desert in Utah, United States.

No one knows who built and installed these monoliths and who took them down. According to the Bureau of Land Management, the one in Utah was demolished by an unknown person or a group.

Both monoliths have sparked huge public interest. Theories about their origin range from pranks and objects of art to aliens attempting to contact humans.

According to Insider, which examined Google Earth data, the structure that was spotted in Utah on 18 November actually appeared years ago, somewhere between August 2015 and October 2016. The New York Times wrote that the pillar is a work created by John McCracken. The minimalist artist, who died in 2011, created similar structures and according to his son he wanted to leave his works in remote places.

Quiet the mind and the soul will speak installation but minimalist John McCracken. The artist occupies a singular position in the recent history of American art with work that melds the restrained formal qualities of Minimalist sculpture. #art #inspiration #minimal pic.twitter.com/6jz9fa8jyQ

​There are more complex theories about the monolith. The structure resembles a slab from Stanley Kubrick's 2001: A Space Odyssey. The movie co-written by Sir Arthur Clarke, an English science-fiction author, shows a similar structure installed by aliens in a desert. While some people speculated that the monolith in Utah is a tribute to the iconic scene in the movie, others claimed that it was indeed installed by aliens.

According to another theory, the slab was forgotten by the film crew of the sci-fi series Westworld, who were working in a nearby location.

As for the structure in Romania, many people believe it was installed by some prankster in response to the one seen in Utah, pointing to the differences between the two. The monolith in Utah was polished, while the one in Romania had some bizarre scribbles on it.

Utah's monolith has visible screws and seams, Romania's looks like a sad art project with awful welding skills and some sort of texture clearly made with a sander typically seen on every apartment door in Bushwick. Aliens, please improve your buffering technique. Score 👽👽⚪⚪⚪ pic.twitter.com/SloeLr4YQJ

​A spokeswoman for the Piatra Neamt police said officers will conduct an investigation as the structure was installed illegally in an archaeological area.