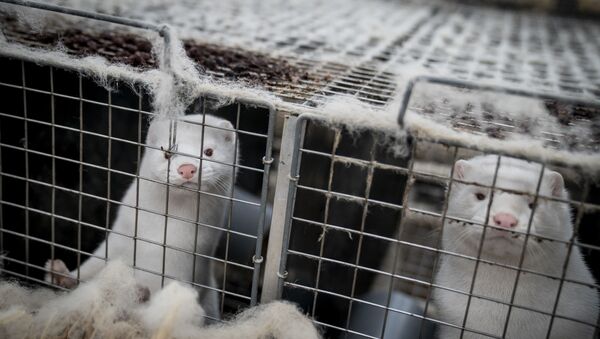 Igor Kuznetsov
All materials
Culled animals emerging from the ground due to decomposition gases sparked morbid jokes about an invasion of "zombie killer mink", which, many argued, wouldn't surprise anybody in 2020.

Since Denmark proclaimed the successful eradication of the mutated coronavirus by killing millions of farmed mink, unexpected problem have arisen.

At a military training area in Holsterbo in western Jutland in Denmark, mink carcasses have swelled up and pushed out of the ground they were buried in.

The mink corpses were treated with disinfectant and covered with lime before being buried. But the grave turned out to be too shallow, so mink carcasses swelled up and penetrated the soil from below.

"In connection with the decay, gases can form that cause the whole thing to expand a little, and then in that way, in the worst case, they get pushed out of the ground", National Police press officer Thomas Kristensen explained to Danish Radio.

The National Police have already experienced this problem in other places.

"It is a natural process, which we have tried to solve by laying more soil on top", Thomas Kristensen explained.

The challenge, however, is that West Jutland's sandy soil proved to be too light.

"One metre of soil is not always the same. It depends on what it is made of. So that's why we've seen it happening", Kristensen said.

Henceforth, the mink will continue to be buried 2.5 metres underground instead of one metre to avoid similar situations. The burial grounds were also covered with additional soil. The area at Holsterbo is under guard, and in the long run will be fenced in due to the risk of infection associated with the dead animals.

"Mink, which have been infected with corona, are transmitting [the virus] primarily through respiration, so in this way dead mink infect less than live mink. But there may still be bacteria on their fur", Kristensen explained.

On social media, the morbid news sparked an exercise in gallows humour, as Danes started joking about "zombie mink".

And now, for the latest in the saga of Denmark's Covid-infested mink: Although buried 3 feet underground, the mink are bloated with gasses and thousands are rising to the surface - from mass graves. I swear they'll be making zombie movies about this soon.https://t.co/5V9q1A6j4I

Run... The zombie minks are cominghttps://t.co/1MTkpKGNUg

One metre isn't deep enough when you're burying infected mink, y'know. Decomposition gases can force them to the surface. You've got to bury them 2.5m down. https://t.co/CyHqEsfeKQ With video!

​Tweet: "It is almost as if it is symbolic in some way".

The first COVID-19 case on a Danish mink farm was discovered in June, later spreading to hundreds of farms. A mutated version of the coronavirus was found among the infected mink during the autumn that also spread to humans.

Since the mutation could potentially have serious consequences for the future vaccination process, the Danish Social Democrat government announced on 4 November that all of the country's mink, both infected and healthy, would be culled.

While the government subsequently acknowledged that its decision to cull more than 15 million mink had no legal foundation for the healthy animals, it nevertheless garnered the parliamentary support necessary to move forward with its plan. Danish mink farming will be banned until 1 January 2022, effectively wiping out an entire industry, and sparking tractor protests from breeders.

Despite Mette Frederiksen issuing a prompt apology and the agriculture minister's resignation, the plan to slaughter the entire mink stock in a nation that for several decades has been the world's leading exporter of mink fur, remained "non-negotiable".