Analysts Point Out Key Challenge for Biden Inside His Own Party 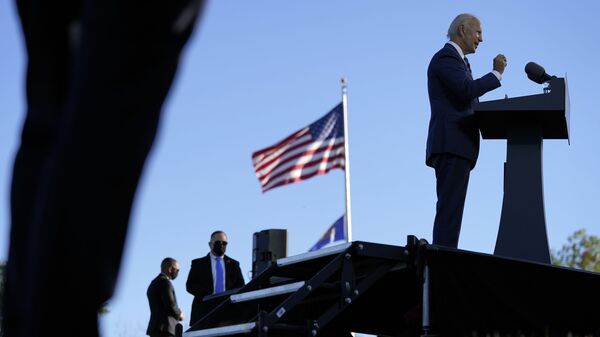 Oleg Burunov
All materialsWrite to the author
With Democratic nominee Joe Biden currently being the projected winner of the 3 November election, President Donald Trump has reportedly signalled readiness to accept Biden's victory only after all legal options are exhausted.

Keeping moderate and progressive Democrats from tearing the party apart will most likely become one of the key challenges for Joe Biden, who has already declared himself the US president-elect, the Financial Times (FT) reports.

The newspaper pointed to the Democratic Party’s conference call that was held a few days after the 3 November presidential election and which reflected the tensions inside the party, which is seeking to expand its clout in the Senate and the House of Representatives.

The call, among other things, saw heated debate between “distraught” centrist Democrats who had lost their seats, or who had narrowly won in the face of tough challenges from the Republicans. 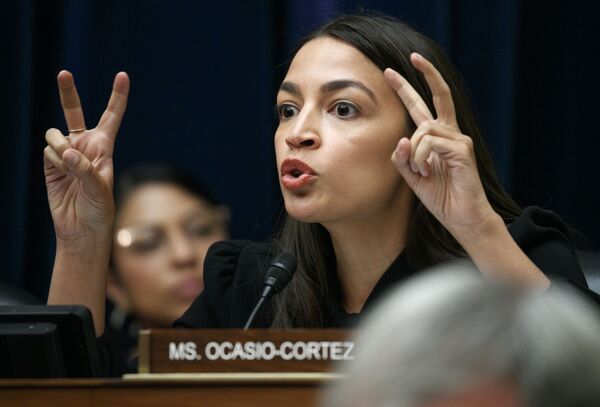 Rep. Alexandria Ocasio-Cortez, D-N.Y., asks a question during a House Oversight subcommittee hearing into the Trump administration's decision to stop considering requests from immigrants seeking to remain in the country for medical treatment and other hardships, Wednesday, Sept. 11, 2019, in Washington.
© AP Photo / Jacquelyn Martin

Abigail Spanberger, a first-term congresswoman from Virginia, said during the call that “if we are classifying Tuesday [election] as a success from a congressional standpoint, we will get [expletive] torn apart in 2022”.

The event put a question mark on how Biden, “who has branded himself as a centrist who can reach across the political aisle, would balance the interests of progressives and moderates within his own party when he becomes president”, according to the FT.

In this context, the news outlet cited Larry Sabato of the University of Virginia Centre for Politics as claiming that one of the Democratic nominee’s “real difficulties” will be “keeping the [party’s] left and centre from battling with one another constantly”.

Sabato argued that part of the problem will pertain to Biden’s collaboration with hardliner Mitch McConnell, the Republican Senate majority leader, given that any legislative deal with McConnell would most likely be flatly rejected by progressive Democrats.

“All of the elements are here for turmoil and internecine warfare and infighting of all sorts”, Sabato asserted.

He was echoed by Matt Bennett, co-founder of the centrist Democratic think-tank Third Way, who was cited by the FT as saying that “fundamentally, the Democratic brand is not all that strong outside of areas that are very blue”.

“Voters look at [moderate House Democrats], they look at who is running for the state house and they see Bernie Sanders or AOC [Alexandria Ocasio-Cortez], or Nancy Pelosi”, Bennett added.

A similar tone was struck by Waleed Shahid, communications director of the political action group Justice Democrats, seen as a “driving force” behind the election of the so-called Squad involving Ocasio-Cortez, as well as Ayanna Pressley, Ilhan Omar, and Rashida Tlaib.

Shahid predicted “a lot of choices” for the Democrats, which will likely show how ready they will be to cooperate with McConnell’s agenda “in the name of getting things done”.

“I think that some of the divides in the Democratic Party will probably become even more prominent if they choose to go down that conciliatory path”, he concluded.

Biden Will Reportedly Rely Heavily on Executive Orders to Reverse Many of Trump's Policies
Biden has, meanwhile, vowed to govern as "an American president, not a Democrat", who "doesn't see Red and Blue states, but the United States". During an address to the nation in the capacity of self-proclaimed president-elect on Saturday, he said that “it’s time to put away the harsh rhetoric” and “lower the temperature” in order “to see each other again”.

The address came as President Donald Trump tweeted that he had "won the election" by obtaining "71,000,000 legal votes", also pledging that as of 9 November, he would start "prosecuting our case in court to ensure election laws are fully upheld and the rightful winner is seated".