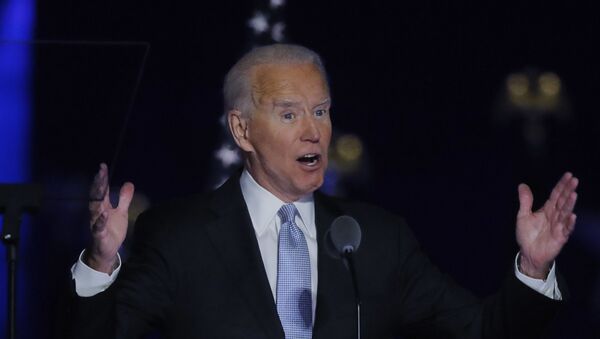 Tim Korso
All materialsWrite to the author
Joe Biden declared himself the winner of the presidential race after media outlets said he was victorious in the states of Pennsylvania and Nevada, where ballots are still being counted. Trump condemned the announcement, saying the race is far from being over and vowing to file suits regarding alleged election violations.

The projected winner in the US presidential election, Joe Biden, is planning to overturn many of the policies and decisions made by President Donald Trump using a series of executive orders, The Washington Post reported citing anonymous sources close to the Democrat's campaign.

The Biden team has already been granted limited access to government resources and limited clearance to prepare for an expected transition of power. It announced it was working on assembling a COVID-19 response team that will start discussions on how to curb the pandemic after Biden takes office.

When it comes to reversing Trump's policies, the Biden team does not plan to stop at the response to the pandemic - it will also alter the former's approach to issues related to climate change, foreign policy, healthcare, and immigration, according to WaPo. The newspaper's sources claim the Democrat's first executive orders will try to return the US to the Paris climate accords, get Washington back into the World Health Organisation, and reinstate the Obama-era programme that allowed the children of illegal migrants to stay in the country instead of being deported.

Biden will also reportedly seek to lift a travel ban imposed by the Trump administration in the first days of his presidency. The order limits the entry of people arriving from predominantly Muslim countries, such as Chad, Iran, Libya, Somalia, Syria, and Yemen, although the list also includes North Korea and Venezuela at the moment. In the run-up to the election, US President Donald Trump warned his supporters that should Biden be elected the latter would seek to abolish the ban. POTUS insisted that by doing so the Democrat would open the nation's doors to terrorists.

"Biden wants to terminate our travel bans and surge refugees from the most dangerous places in the world. He will open the floodgate to radical Islamic terrorism", Trump said at a Florida rally on 30 October.

Following After His Predecessor?

While Biden still remains the projected winner of the election and his party is ensured of keeping its majority in the House, there is no certainty that the Democrats will take the Senate. Right now, two states are still counting their votes and leaning red, while the future of two more seats from Georgia will be decided in run-off elections in January. Should both of Georgia's seats go blue, the Democrats will have a majority, with Kamala Harris serving as a tie-breaker even if Alaska's and North Carolina's seats go to the GOP.

However, if the Democrats fail to gain a majority in the Senate the projected Biden administration might face the prospects of being unable to freely pass desired legislation through Congress. In light of this, the Democrat is set to rely much more heavily on executive orders than he originally planned to, The Washington Post's sources claim.

"The policy team, the transition policy teams, are focusing now very much on executive power. I expect that to be freely used in a Biden administration at this point, if the Senate becomes a roadblock", an anonymous Biden "ally" was cited by the newspaper as saying.

This is just one of the tactics used by Donald Trump that Biden, if elected, vowed to abolish, and it might not be the only one. According to the newspaper, the former VP might also appoint numerous officials in an acting capacity to avoid opposition in the Senate, should it retain a Republican majority.

The reports regarding Biden's first plans for the presidency come in the wake of the Democrat declaring himself the winner of the election – a notion disputed by his Republican rival Donald Trump, who refuses to concede defeat. Trump has stated that the election is "far from over" as several states are continuing to count ballots and Trump's legal team preparing to fight for recounts, rejections of late-arriving votes, and for proving the existence of voter fraud in courts starting on 9 November.

Despite Biden only being the projected winner, many of his Democratic allies and numerous world leaders have already congratulated him on the victory, including the president of France, the chancellors of Germany and Austria, the PMs of Canada, the UK, and Israel. Mexican President Andres Manuel Lopez Obrador, in turn, said he could not congratulate either of the candidates until all legal proceedings regarding the election are concluded.