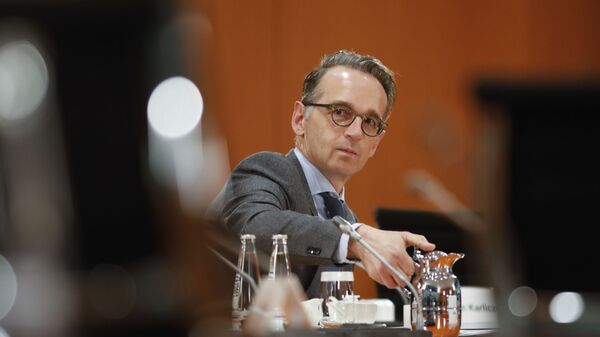 © AP Photo / Markus Schreiber
Subscribe
International
India
Africa
ATHENS (Sputnik) - German Foreign Minister Heiko Maas said he was "extremely surprised" by the latest actions of Turkey after successfully bringing the contradictions between Turkey and Greece onto the path of diplomacy.

Speaking at a joint press conference with Prime Minister of the self-proclaimed Turkish Republic of Northern Cyprus (TRNC) Ersin Tatar on 6 October, Turkish President Recep Tayyip Erdogan announced the opening of the Varosha embankment. This is a tourist quarter at the southeast coast of Cyprus, which has been closed to the public since 1974 after the occupation of part of Cyprus by Turkish troops and the partition of the island. Varosha is protected by a 1984 UN Security Council resolution.

"I believe that over the past weeks and months we have jointly managed to bring the contradictions between Turkey and Greece onto the path of diplomacy. I am very glad that with the significant help of the Greek prime minister, some time ago we managed to announce the need for direct talks", Maas said at a meeting with Greek Prime Minister Kyriakos Mitsotakis in Athens.

"So we were extremely surprised by what we have seen over the past few days from the Turkish side - both the opening of the Varosha embankment and the fact that the Oruc Reis departed again [for research]", the diplomat said.

Turkey also issued an international Navtex alert late Sunday, according to which the Oruc Reis vessel will conduct research with the Ataman and Cengizhan vessels south of the Greek island of Kastelorizo ​12-22 October.

"All this contradicts the spirit of what we agreed on, that is, in an atmosphere of authority and trust, to try to reduce the tension of the conflict by diplomatic means", Maas he said.

Prior to this, seismic surveys of Oruc Reis in the Eastern Mediterranean in an area that Greece considers its exclusive economic zone, led to a sharp deterioration in relations between Athens and Ankara. With the mediation of Germany, an agreement was reached on the resumption of probing contacts with Turkey, interrupted in 2016, and there were plans to hold the 61st round of contacts soon.