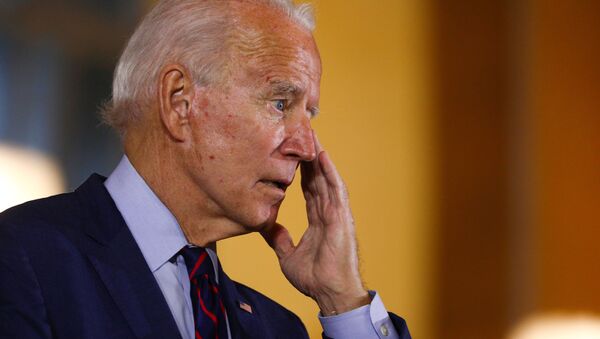 Jason Dunn
All materialsWrite to the author
Former Vice President Joe Biden, who is running on the Democratic ticket against incumbent Republican Donald Trump, has repeatedly urged voters to support other candidates after being pitched frustrating questions throughout the White House race.

Democratic presidential nominee Joe Biden admitted during an interview on Monday that Americans who, according to polling, say they are better off now than four years ago “probably shouldn’t” vote for him, claiming that the respondees have “memory” problems.

“Gallup reported last week 56% of Americans said they were better off today than they were four years ago—would’ve been under the Obama-Biden administration”, the reporter told the former vice president.

“So why should people who feel they are better off today, under the Trump administration, vote for you?"

Biden responded saying: “Well, if they think that, they probably shouldn’t".

“They think 54% [sic] percent of the American are better off economically today than they were under our administration?” Biden said. “Well, their memory is not very good, quite frankly".

The Democratic contender then added "we have a president who doesn’t share the values of most Americans" who is not "honest with people".

"He is flouting the conventions relative to public safety in terms even now not wearing a mask", Biden said.

Biden says 56 percent of Americans shouldn’t vote for him because they think they’re doing better under Trump. pic.twitter.com/w3fK1jZi6o

​This follows a Gallup census last Wednesday that polled how those participating in the election view the trajectory of their quality of living, with 56% saying they were better off than at the end of the Obama Administration and just before Donald Trump assumed his presidential role.

These numbers will likely be music to the ears of the Trump campaign, who has seen the incumbent presidents voting intention polling crash against his Democratic rival.

Biden has told members of the public not to vote for him on repeated occasions during both his presidential and primary campaigns.

On May 14, 2020, he said during an MSNBC interview those who believe sexual assault allegations from 1993 made by Tara Reade “probably shouldn’t vote for me” and instead “vote their heart".

“I wouldn’t vote for me if I believed Tara Reade", he said.

​In August, the 77-year old told those concerned about his age not to vote for him while speaking to reporters in Keene, N.H.

During the primary campaigns, when his main opponent Senator Bernie Sanders was pushing environmentalism as a core message in his campaign, the former Iowa state representative Ed Fallon, said he would not support the former VP in the Iowa primary.

Biden assumed he was a Sanders supporter before Fallon told him he was voting for Tom Steyer.

A man in Iowa asks @JoeBiden to stop supporting the building of pipelines. Joe Biden tells him to go vote for someone else & then starts accusing him of voting for Bernie...