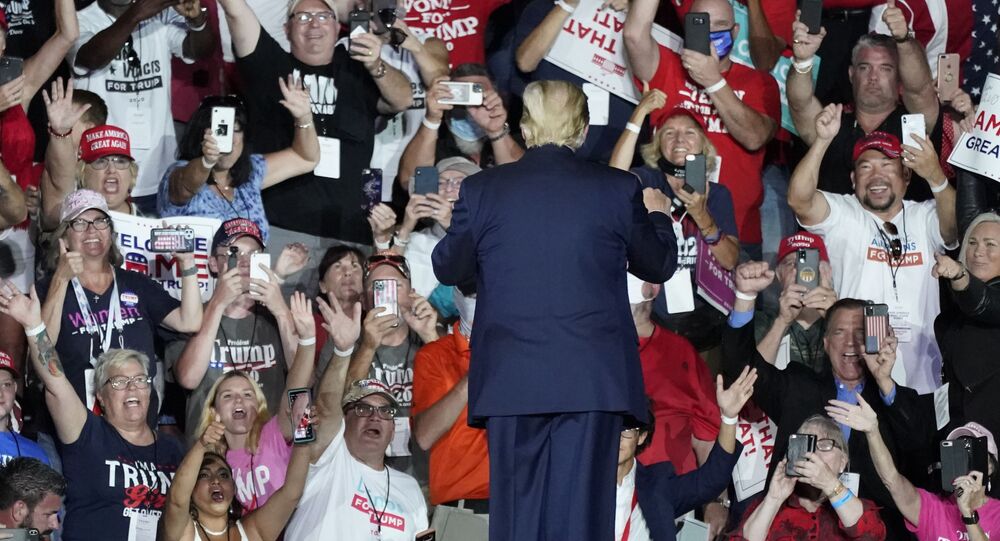 On Monday night, Donald Trump held his first campaign rally since recovering from the coronavirus, with the election event coming after his physician gave the President the all-clear for being around other people again.

President Trump’s performance at Monday’s campaign rally in Sanford, Florida was a make-or-break opportunity for him to contrast his verve against former Vice-President Joe Biden’s lack of vitality, and he seems to have nailed his goal, says Dr Carole Lieberman, certified psychiatrist, body language expert and best-selling author.

“President Trump seemed determined to show the world that he was - not only back to health, but healthier and more powerful than ever. And he accomplished this with his grand gestures and going on for over an hour. This is one of the most optimistic, determined speeches he has ever given (or at least that I have ever seen). It was as though facing his own mortality, when he was sick with Covid-19, gave him more of a 'do or die' sense about his campaign,” Lieberman believes.

Trump revved up his base at Monday night’s event, smiling, offering to kiss the audience, speaking in an animated way and even dancing the YMCA to a cheering crowd.

“I went through it, now they say I’m immune – I feel so powerful,” Trump said, recalling his experience with Covid-19. “I’ll walk into that audience. I’ll walk in there, I’ll kiss everyone in that audience. I’ll kiss the guys and the beautiful women, and everyone. I’ll just give you a big, fat kiss,” he added, ad libbing to the crowd in typical Trump fashion.

Trump claims he's now "immune" to the coronavirus, feeling "powerful" and willing to "kiss everyone" in the audience. "I'll kiss the guys and the beautiful women," he said. pic.twitter.com/0brz0Rl8UQ

Trump “left no stone unturned” when it came to trashing his opponent, according to Lieberman, pointing to examples of Joe Biden’s alleged dementia, “(not remembering Mitt Romney’s name, not knowing what state he was in, and saying he was running for the Senate), and saying Biden had a really bad day".

Trump, the body language expert says, “made lots of gestures to connect with the crowd, danced around to show his energy, and lots of arms outstretched to show inclusiveness of ‘the people’ and the grandness of what he plans to do when he wins.”

Lieberman considers the President’s performance to have been a huge contrast to footage of him boarding Marine One on 2 October, when he grasped the handrails firmly with both hands as he climbed the steps of the helicopter before taking off for Walter Reed Military Medical Center.

Vlad Davidiuk, a Republican strategist, political analyst and media consultant, believes Trump in effect had no other option but to demonstrate his vitality at Monday’s campaign rally, especially since his recent criticism of Biden has put so much emphasis on the latter’s alleged personal weakness.

“Trump understands that his criticism of Biden as ‘Sleepy Joe’, along with his own coronavirus diagnosis, means he must demonstrate clearly that his health and strength are sufficient to withstand the rigours of a vigorous campaign, as well as the incredible demands of the most important and consequential job in the world – the US Presidency,” Davidiuk says.

As far as the performance changing anyone’s minds ahead of 3 November is concerned, the analyst says for the most part, voters’ opinions on the candidates are already “largely baked in".

“Those who support Trump are committed to supporting him, those who hate Trump will almost universally support Biden. Voters know Trump is a personality and retail politician who loves engaging with the crowds and greeting his supporters. Trump's supporters will see it as strength, detractors will see it as reckless and desperate. Comparing himself with Biden, who regularly holds small events with limited attendance, Trump sees the contrast as a positive, and derives confidence from the display of support and approval,” the strategist explains.

Joe Biden holds another rally in Toledo, Ohio and NO ONE shows up!

There were more Trump supporters protesting than Biden attendees!
pic.twitter.com/WTL17pJAU5

Typical Trump is Back

Finally, Richard Vatz, a distinguished professor of rhetoric and communication at Towson University in Maryland, says Trump’s rally was meant to show that the President was back to his old self.

Even during his battle with coronavirus, Trump remained true to form, according to Vatz. “Throughout his illness the President was also true to type: irresponsible in personal behavior, critically correct in policy disagreements and beset by an almost uniformly despising electronic and print media.

“By all polls, he is behind in important states, but he was in 2016 as well. He is hoping that his barnstorming finale to his campaigning will leapfrog him over Vice-President Biden, who, also characteristically, is a little slow on the upbeat and, perhaps quite significantly, clumsily refuses to address a critical issue: Supreme Court packing,” Vatz concludes.