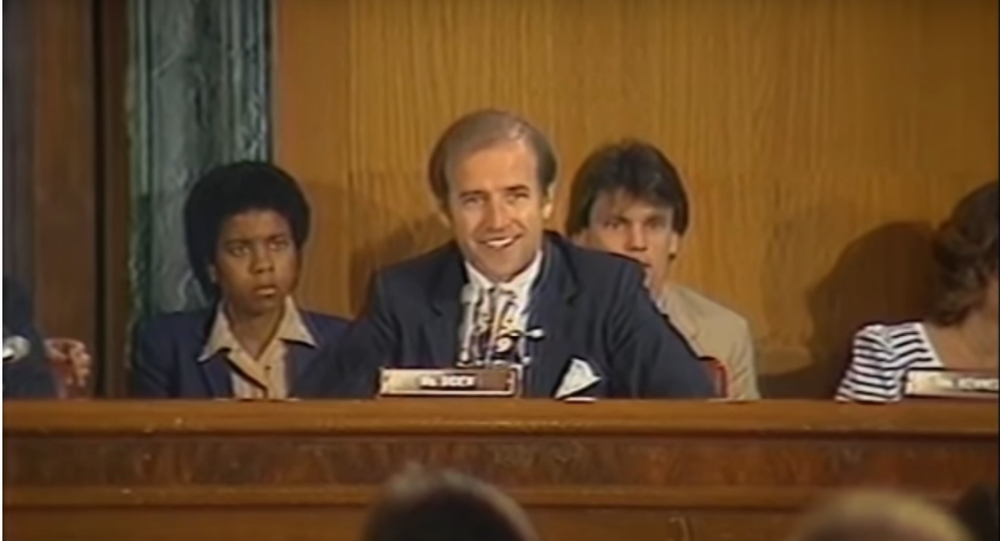 The former vice president and his running mate Kamala Harris have repeatedly avoided commenting on the idea of ‘court-packing’, or increasing the number of Supreme Court justices from 9 to 15, in recent days. President Donald Trump has suggested that the idea would “permanently destroy the Court” if implemented.

“President [Franklin] Roosevelt clearly had the right to send to the United States Senate and the United States Congress a proposal to pack the court. It was totally within his right to do that. He violated no law, he was legalistically absolutely correct. But it was a bonehead idea. It was a terrible, terrible mistake to make, and it put in question for an entire decade the independence of the most significant body (including the Congress in my view) – the Supreme Court of the United States of America,” Biden says in the video.

The footage was filmed in July 1983, with Biden, a senator from the state of Delaware at the time, mentioning the Supreme Court packing issue during a Senate Judiciary Committee hearing on nominations to the Commission on Civil Rights.

In 1983, President Ronald Reagan sought to dismiss three of the Commission’s members over alleged disagreements on policy, with the members resisting and taking on his administration in a federal court. A compromise was eventually reached with the help of the Senate, in which half of the Commission’s eight members were to be approved by the president, and the other half by Congress. The Commission has been a regular source of partisan bickering ever since.

Reporters and Biden’s Republican opponents, including President Trump, have repeatedly criticized the Democratic candidate and his running mate for their refusal to offer a firm position on the court packing issue.

On Saturday, when asked directly whether voters ‘deserve to know’ his position on the matter, Biden said “no, they don’t deserve – I’m not going to play [Trump’s] game. He’d love me to talk about –and I’ve already said something on court-packing. He’d love that to be the discussion instead of what he’s doing now.”

© AP Photo / Manuel Balce Ceneta
What, When & Where: Amy Coney Barrett Supreme Court Confirmation Hearing to Kick Off in US Senate
Democratic lawmakers floated the idea of increasing the number of justices in the Supreme Court after Trump moved to nominate conservative Amy Coney Barrett to replace liberal justice Ruth Bader Ginsburg after her death last month. Democrats have argued that Ginsburg’s replacement should be chosen only after the election. Republicans say Trump has the constitutional right and duty to select a replacement as quickly as possible. Five out of the Court’s eight justices are already conservatives, who were chosen by Republican presidents. If Barrett replaces Ginsburg, the liberal minority will shrink to three.

On Sunday, Trump took to Twitter to vent on the court-packing issue, suggesting that Roosevelt’s “own party told him you cannot PACK the United States Supreme Court” because “it would permanently destroy the Court.”

FDR’s own party told him you cannot PACK the United States Supreme Court, it would permanently destroy the Court. @judgejeanine @tedcruz But now the Radical Left Democrats are pushing Biden to do this. He has zero chance against them!

This isn’t the first time that old footage has come back to sting Biden. Last month, US media dug up old footage debunking the candidate’s claims that he 'predicted' 9/11.

Before that, users dug up news footage from the 80s of Biden lying about graduating in the top half of his class, about having three degrees, and about being named ‘outstanding political science student’ of the year during his studies at a campaign stop during his 1988 presidential run. Several months after withdrawing from the race, Biden suffered two brain aneurisms, requiring two operations, but was said to have made a complete recovery after that.