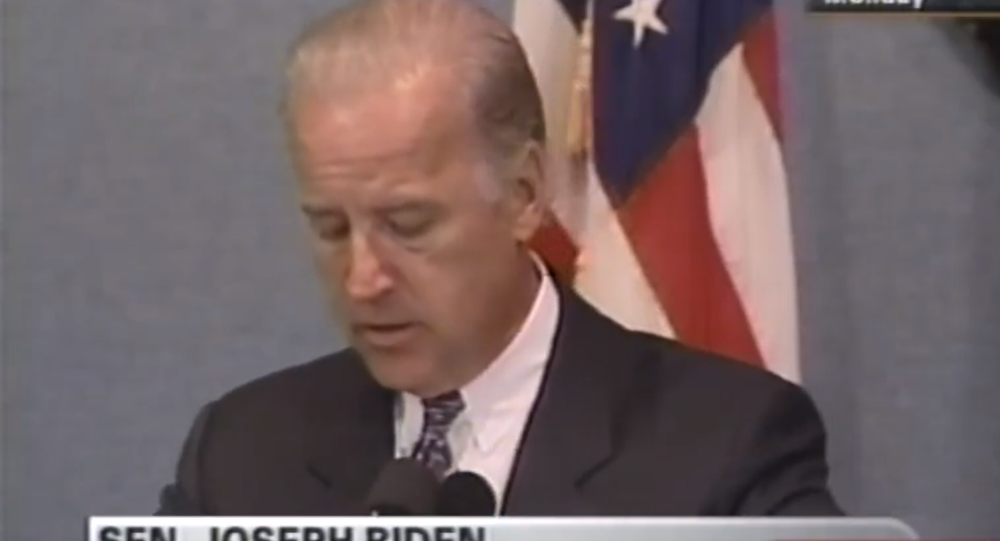 Friday marks the 19th anniversary of the 11 September 2001 attacks, the deadliest terrorist incident in modern history, and the worst-ever attack on US soil. But as some Americans mourn, others appear to be too busy thinking about politics ahead of November’s election.

The New York Post has dug up an old video of a 10 September 2001 speech by then-Delaware Senator Joe Biden which the politician would later go on to cite as evidence that he had ‘predicted’ 9/11.

In the hour-long speech, Biden discussed the Bush administration’s missile defence spending plans, suggesting that forces seeking to harm America were much more likely to attack using unconventional methods, including the use of biological weapons or nuclear bombs packed aboard ships or planes, or in backpacks.

“Even the Joint Chiefs say that a strategic nuclear attack is less likely than a regional conflict, a major theatre war, terrorist attacks at home or abroad, or any number of other real issues,” Biden said. “We’ll have diverted all that money to address the least likely threat while the real threat comes to this country in the hold of a ship, the belly of a plane or smuggled into a city in the middle of the night in a vial in a backpack,” he added.

“But I ask you: you want to do us damage. Are you more likely to send a missile you’re not sure can reach us, with a biological or chemical weapon because you don’t have the throw weight to put a nuclear weapon on it, and no one’s anticipating that in the near term, with a return address saying ‘it came from us, here’s where we are’, or are you more likely to put somebody with a backpack crossing the border from Vancouver down to Seattle, or coming up the New York Harbor with a rusty old ship with an atom bomb sitting in the hull? Which are you more likely to do, and what defence do we have against those other things?” the politician asked.

Less than a day after the speech, in the aftermath of the terror attacks on New York City and Washington, in an interview with ABC News, Biden boasted he had essentially predicted the attacks, claiming, falsely, that in his 10 September remarks, that he had talked about planes being flown into buildings.

“Some of us - literally as recently as yesterday I spoke to the National Press Club and talked about the fact that it’s just as easy to fly from a national airport into the White House as it is to do the same thing in New York. We know all these possibilities exist, and one of the things we have to do is we have to get our priorities straight in terms of what the real threats are that face us, and use the assets we have to begin to deal with those threats,” Biden said.

But a C-Span transcript of his 10 September remarks shows that Biden made no other mention of “planes” apart from the “belly of the plane” comment mentioned above.

Biden repeated his claims about predicting 9/11 in a Senate debate on rail subsidies in July 2006, saying that “on 10 September, the day before the attacks on the towers, I made a speech to the National Press Club where I warned about a massive attack on the United States of America from terrorists; why I thought it would happen and why I thought our priorities were misplaced, the day before 9/11. I had no knowledge of 9/11, but I have been working in this field, like my colleagues on the floor, for 30 years. There was an inevitability to it. But we did nothing.”

In September 2006, in another appearance at the National Press Club, Biden again boasted about his predictive abilities. “Mike was kind enough [to reference] my last appearance before the Press Club when I spoke almost five years ago to the day the day before 9/11 and indicated what I thought was the greatest threat was at that time. To state the obvious I wasn’t clairvoyant, but I knew what everybody else knew, and I believed then that I was making a valid point, and I think the point remains valid today,” he said.

Biden isn’t the only one to have boasted about his alleged ability to predict 9/11. In 2015, after Buzzfeed dug up an excerpt from a 2000 book by then-presidential candidate Donald Trump in which the business mogul warned of a major terror attack on US soil, Trump tweeted: “See, the attack very possibly could have been stopped. We need real leadership and vision.”

See, the attack very possibly could have been stopped. We need real leadership and vision. https://t.co/JA1Fo5H6FP

In the book, entitled ‘The America We Deserve’, Trump wrote: “I really am convinced we’re in danger of the sort of terrorist attacks that will make the [1994] bombing of the Trade Center look like kids playing with firecrackers. No sensible analyst rejects this possibility, and plenty of them, like me, are not wondering if but when it will happen.”

Trump also mentioned Osama bin Laden by name, but not in connection with the possible attack, but rather as a criticism of the media’s short attention span. “One day we’re told that a shadowy figure with no fixed address named Osama bin-Laden is public enemy number one, and US jet fighters lay waste to his camp in Afghanistan. He escapes back under some rock, and a few news cycles later it’s on to a new enemy and new crisis.”

Biden, who recently received flak for falsely claiming that he had opposed the 2003 US invasion of Iraq despite being one of its biggest proponents in the Senate, got a new dose of criticism online following the unearthing of the old pre-9/11 video, with users blasting him as a “serial revisionist” and even taking to his own Twitter account to call him out.

He certainly had the Patriot Act written well in advance, in 1996 actually...

All he does is lie. He has been doing this for over 48 years.

A few users jumped in to defend the former vice president, however, saying that “he totally did” essentially predict 9/11 by pushing the Bush administration to focus on terrorism instead of missile defence.

*But he totally did*

W’s missile defense couldn’t prevent what Biden warned against (and AQ carried out). Which wasn’t new. The FBI predicted for years.

The Money Trail: Who is Backing Joe Biden for the White House With Cold, Hard Cash and Why?