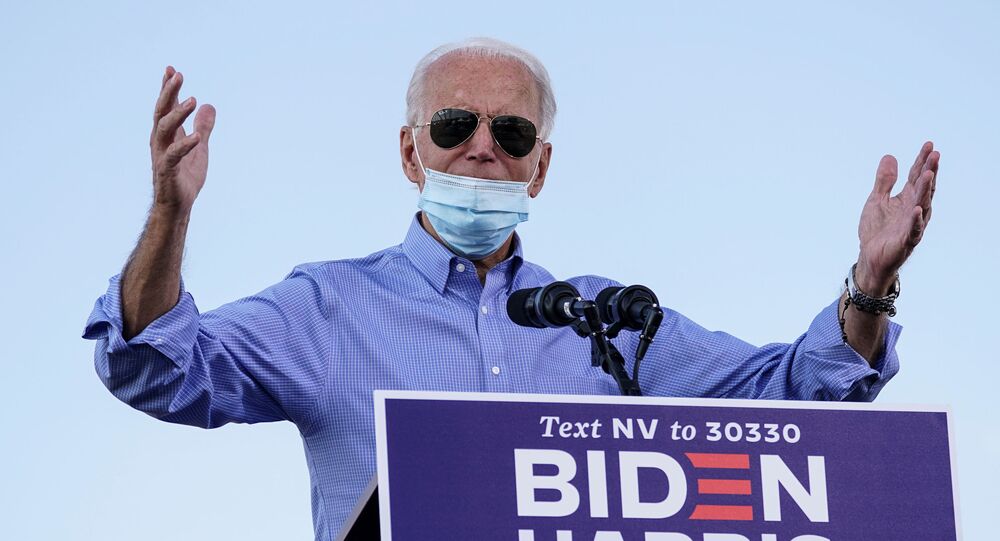 As the date of the November presidential elections in the US draws nearer, state polls continue to show Democrat candidate Joe Biden consistently pulling ahead of his rival, Republican President Donald Trump.

Buoyed by a spate of national and state polls, which find Democrat presidential candidate Joe Biden’s margin of support “growing into the double digits”, the former vice-president stated on Saturday that there was no conceivable way he could lose the election unless there was "chicanery" involved.

Joe Biden: "The only way we lose this is is by the chicanery going on relative to polling places." pic.twitter.com/5M4kSGRCoF

“Here's the deal guys, you've gotta make sure you go out and vote, because the only way we lose this is by the chicanery going on relative to polling places,” Biden told his supporters on Saturday at a campaign event in Erie, Pennsylvania.

The presidential hopeful for the Democrats proceeded to accuse President Donald Trump of “trying to put people in polling places. The same guys you saw standing, blocking people's way in Virginia with banners and rifles slung across their shoulders.”

Biden seemed to be referring to a pro-Trump demonstration at an early in-person polling site in Fairfax, Virginia on 19 September.

Trump Supporters came over to the early voting site to protest while people are in line to Vote in FairFax Virginia. #EarlyVoting pic.twitter.com/Lkkl4o2aAc

​However, neither photos nor video footage from the event show any people openly carrying firearms.

According to county election officials in Virginia, the group, with American flags, Trump banners, chanted "four more years", while remaining positioned around 100 feet from the building's entrance. The supporters did not directly block access, they add.

Nevertheless, some voters and polling staff members claimed they had felt intimidated by the group.

Before leaving the state, Biden back-pedalled on his earlier statements suggesting he would not accept the results of the elections. Emphasising that his words had been “taken a little out of context”, he added that "I'm going to accept the outcome of this election, period".

Earlier, Biden said in an interview with The Daily Show with Trevor Noah in June that his single greatest concern was Trump trying to "steal" victory, with the US President’s campaign responding by accusing the Democrats' contender of stoking fear.

Meanwhile, a spate of national and state polls continue to show Biden ahead in the presidential race - in some cases leading by double digits.

Joe Biden holds a 12-point lead among registered voters in a national poll released by The Washington Post and ABC News early Sunday.