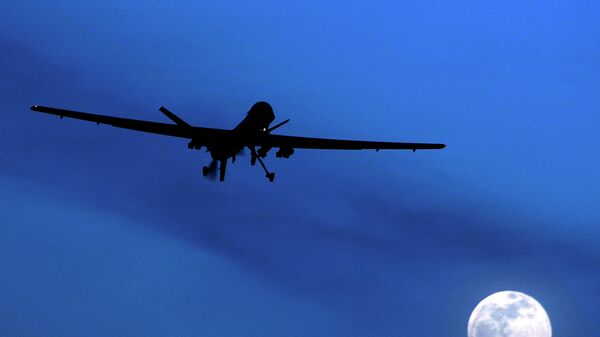 Morgan Artyukhina
All materialsWrite to the author
Spy drones developed for use in US foreign wars have begun appearing over US cities as police forces and defense contractors push for new, lucrative contracts. One peace activist told Sputnik that the fights against their use abroad and their use at home should never have been separate, and are intricately linked to the Black Lives Matter movement.

Long before the Black Lives Matter uprisings swept American cities in May and June of 2020, police forces across the United States were pursuing more and more surveillance drone technology. While smaller, helicopter-style drones have made some headway with police, more recently, fixed-wing surveillance drones like General Atomics’ MQ-9B SkyGuardian are coming closer to large-scale domestic use.

The SkyGuardian is a version of the MQ-9A Reaper, an unmanned aerial vehicle (UAV) that replaced the MQ-1 Predator as the Pentagon’s chief weapon in its undeclared wars across the Middle East and North Africa. Reapers are used to carry out airstrikes in Somalia, Yemen, Afghanistan and even Iraq, as when a Reaper was used to assassinate Iranian Quds Force commander Maj. Gen. Qasem Soleimani and several leading Iraqi military leaders in January.

However, the Federal Aviation Administration (FAA) has for years stood in the way of large-scale, semi-autonomous domestic drone use, with unarmed Predators being limited to the southwestern deserts along the US border with Mexico.

Part of that is that the software governing the UAVs is unproven, but companies like helicopter maker Sikorsky, owned by giant Lockheed Martin, have developed the MATRIX software that could one day lead to semi-autonomous passenger aircraft. Sikorsky and General Atomics have been working with the FAA “to update its rules for the age of ubiquitous unmanned flight” with the hopes of having the SkyGuardian certified to fly in American skies by 2025, according to Defense One.

General Atomics “has really been salivating with this idea of spy drones that could be used by police departments in the United States,” peace group Code Pink co-founder Medea Benjamin, who co-authored a recent story on the subject in Salon, told Radio Sputnik’s Fault Lines on Tuesday.

“There are thousands and thousands of police departments so imagine the kinds of profits they could reap if they were able to sell these,” Benjamin told cohosts Shane Stranahan and Jamarl Thomas.

Noting the SkyGuardian UAV is described as a “persistent eye in the sky,” Benjamin said it could take “minute-by-minute videos that get stored to be able to see every movement of everybody below them. There are civil liberties groups like the ACLU [American Civil Liberties Union] and Electronic Frontier Foundation that have been fighting this and trying to get laws passed in different states to stop this from happening. But still, this is controversial, and the verdict is not in yet about whether this might be our future. Of course, a lot depends on what the American people will tolerate,” she explained.

However, she cautioned that police forces have already adopted smaller drones over the last decade, such as the Zenmuse Z30, built by Chinese drone-maker Dà-Jiāng Innovations (DJI), a Shenzhen-based company now under fire as part of Washington’s larger push against Chinese tech giants by alleging they could furnish user data to the Communist Party of China.

Benjamin noted that not only have civil liberties groups fought back against these practices in court, but protests such as Black Lives Matter demonstrations, which have coalesced around demands to defund police forces’ massive budgets, affect police abilities to obtain and use expensive surveillance drones as well.

​“People got very angry” about several spy drones being spotted over protests in Minneapolis, Minnesota, in May and June, where the spark of the present wave of protests first caught tinder, Benjamin said. They “contacted their elected representatives and their police departments and said, ‘Why are these drones, which are drones that were designed to be along the borders - which we should be protesting against as well - why are they flying over our cities?’”

“This isn’t a left-right issue; there are many people who would consider themselves conservatives who don’t want the government spying on them, who want a smaller government, who believe in civil liberties. So there has been already a lot of pushback,” Benjamin told Sputnik. She further noted the original test demonstration of the SkyGuardian in San Diego received so much pushback from the community that its stated purpose was changed to “mapping of critical infrastructure.”

Benjamin said the chickens have come home to roost in a way, as the SkyGuardian becomes just the latest weapon of war deployed abroad for years with minimal opposition in the US to be brought home to be used against US citizens.

“This is part of the surveillance that has been going on and the militarization” of the US border with Mexico “that predates Trump. When there has been permission to use these very large and sophisticated drones only at the borders. Then people say, ‘Oh, well, we got to protect ourselves from the southern hordes who want to come in and invade our country.’ And then, slowly but surely, you see those very same drones being seconded to police departments in different states and then used, as I mentioned, when there are protests happening,” Benjamin said.

“So, these things that we fail to protest when they’re killing people in Yemen and Afghanistan and Iraq and Syria then come to our borders and then from our borders, it’s very easy for them to creep into our cities.”