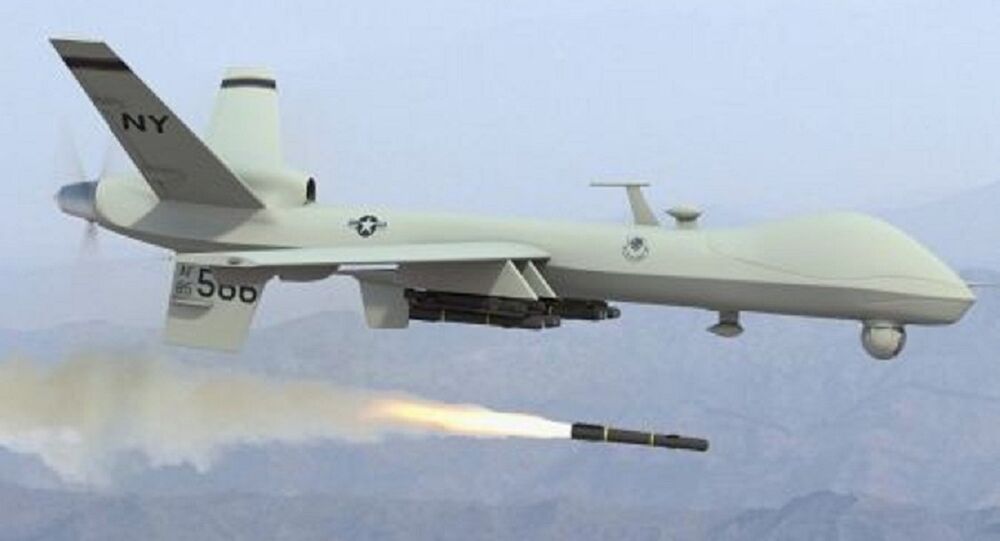 In the aftermath of an al-Shabaab attack on a Kenyan air base housing US aircraft in January, US Africa Command (AFRICOM) is seeking authorization to expand its undeclared drone war against the Somali militant group across the Kenyan border.

AFRICOM commanders are asking for authorization to carry out drone strikes across the Somalia-Kenya border under certain circumstances, the New York Times reported on Tuesday, citing four anonymous American officials.

According to the report, the cross-border raid by al-Shabaab against Camp Simba’s Manda Bay airstrip stirred up panic at AFRICOM headquarters in Stuttgart, Germany, about its inability to respond with air attacks to another incursion.

The January 5 raid was carried out by fewer than 20 militants, but they killed three Americans - one soldier and two security contractors - and destroyed several aircraft, including a De Havilland Canada Dash 8 surveillance aircraft and two helicopters, plus three other aircraft.

The Dash 8 was later revealed as belonging to L3Harris Technologies, a private security contractor the Organized Crime and Corruption Reporting Project (OCCRP) exposed as flying drones for airstrikes by AFRICOM out of Manda Bay.

AFRICOM spokesperson Col. Christopher P. Karns did not comment directly on the proposal, but he told the Times the command “certainly recognizes the need to apply consistent international pressure on al-Shabaab and to monitor their activity, presence, and actively confront them in order to prevent their spread. This can take several forms.”

According to the anonymous officials, the draft guidelines would authorize not just defensive strikes in Kenya, but also offensive attacks if justified as preemptive. However, the authorization would be limited to the border counties of Garissa and Lamu - where Manda Bay is located - and any strikes would require the explicit approval of Nairobi.

The US delivered the first six of a dozen MD-530F Cayuse Warrior light attack helicopters to the Kenyan Armed Forces in late January, although as Sputnik reported, the deal followed a halving of US foreign aid to Kenya beginning the previous October.

The US has been at war in Somalia since the early 1990s, but after the September 11, 2001, terrorist attacks by al-Qaeda, the US opened a new, undeclared drone war across a slew of countries, including Somalia, under the self-granted authority of the Authorization for Use of Military Force Against Terrorists (AUMF) that underpinned the US War on Terror.

However, it wasn’t until 2013 that the Obama administration created a vague set of standards by which to judge the validity of ordering such an attack, including “near certainty” of the target’s presence as well as the absence of potential civilian casualties. Sputnik has documented how the Trump administration has eroded those standards, requiring simply a “reasonable certainty” of the target’s presence and totally erasing considerations for potential civilian collateral damage.

At the same time, the Trump administration has dramatically intensified its air war in Somalia. In the first seven months of 2020 alone, the US carried out more drone strikes in the East African nation than under the George W. Bush and Obama administrations combined, Time reported. According to AFRICOM, that’s 43 airstrikes between January and July 2020, compared to just 42 strikes between 2007 and 2017.

Persistent investigative reports of AFRICOM’s actions by Amnesty International, which proved those airstrikes have killed and injured many Somalis, contradicting Pentagon claims, resulted in AFRICOM deciding this past spring to begin issuing quarterly reports based on its investigations into claimed civilian casualties. However, their underlying methods for calculating casualties remain unchanged.

AFRICOM chief Army Gen. Stephen J. Townsend told Voice of America in March that the uptick in strikes had happened because “the threat is higher” after the Manda Bay attack.

"Al-Shabaab is the largest and most kinetically violent arm of al-Qaeda,” the AFRICOM commander told the House Armed Services Committee at the time. “They are a serious threat to not only the Somali people, but the entire region, and one example [is] in a recent attack in Kenya. Another example is their threats to embassies in the region outside of Somalia. … I would just say that I'm of the belief that al-Shabaab today poses a significant threat to American interests in the region.”

AFRICOM: ‘No Pause’ in Fighting Al-Shabaab Despite 5-Week Halt in Somalia Airstrikes