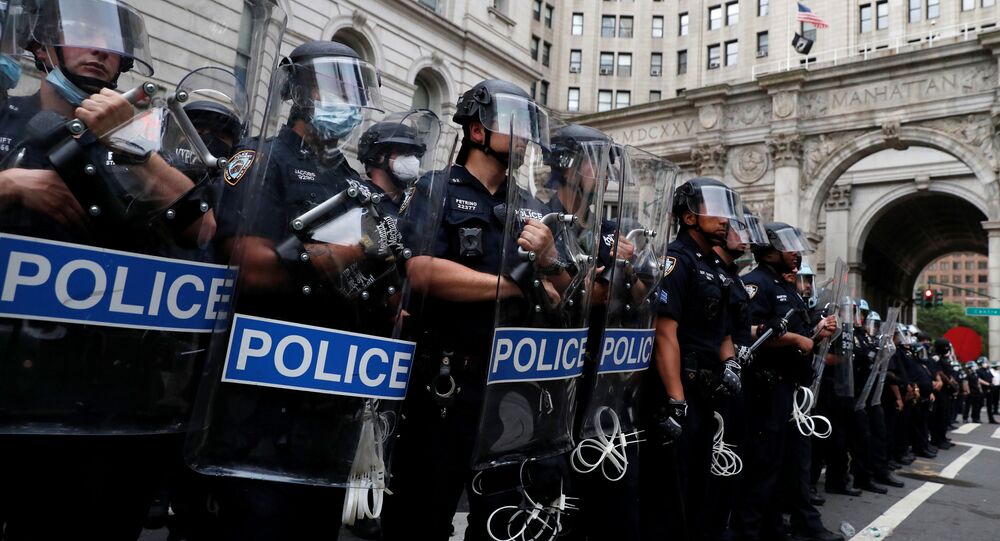 The police response to the ongoing nationwide uprising against anti-Black racism has brought their militarization into full focus. The placing of war weapons on US streets, though facilitated by the Pentagon’s 1033 Program, is equally the product of a warfighter’s mindset cultivated by police since the last nationwide Black uprisings in the 1960s.

US occupations and their corresponding counterinsurgency wars have placed millions of Americans in a role of suppression and social control that blurs the lines between policing and soldiery. The US wars in Iraq and Afghanistan also produced a huge surplus of equipment suited to such roles, which followed the warfighters home - oftentimes into their new professions as police officers.

The point is not that these weapons belong on battlefields in Iraq or Afghanistan instead of in Lafayette Park, but rather, that the very presence of US forces in those countries, occupying them while ostensibly “rebuilding” them from destruction caused by US policy, is what has enabled them to appear on US streets in the first place.

In other words, US police are militarized because the US behaves as if its military were the global policeman.

The primary mechanism by which these war weapons are funneled to US police departments is the 1033 Program, so named for the section of the 1997 National Defense Authorization Act (NDAA) that added the process to the US law code. Under the law, the Secretary of Defense may pass excess US military equipment to police forces that request it, if their applications meet certain qualifications.

For example, the police departments must show they intend to use the equipment for counter-drug, counter-terror or border patrolling operations, must be willing to accept the equipment in its present state, and must accept the costs of transportation and maintenance of the equipment. Otherwise, the transfer is free of charge.

The entire program is overseen by the Defense Logistics Agency’s (DLA) Law Enforcement Support Office (LESO), just the latest in a long line of federal agencies created to manage the US government’s support for expanding state and local police forces. Since its inception, LESO has transferred more than $7.4 billion in US military property to more than 8,000 police departments across the US.

In its 2015 report “War Comes Home,” the American Civil Liberties Union (ACLU) noted that 36% of property transferred by the LESO is not used hand-me-downs, but new materiel. “It appears that DLA can simply purchase property from an equipment or weapons manufacturer and transfer it to a local law enforcement agency free of charge,” the group wrote. “Given that more than a third of property transferred under the program is in fact new, it appears that this practice happens with some regularity.”

The 1033 program is an extension of the earlier Section 1208 in the 1990 NDAA, a more truncated version that only permitted the transfer of small arms and ammunition and aimed explicitly to buttress the US War on Drugs. However, the earliest such program dates to 1944, when the Surplus Property Act provided for the transfer of military property to civilian ownership after the end of the Second World War, although this was typically land used for bases and storage.

What Weapons Pass Through LESO?

While neither LESO nor DLA are required to report 1033 activities to Congress, the agency does provide a list of transfers on its website - although this has only been required since 2016 in response to widespread outrage at the program and its lack of oversight.

The LRAD, which produces eardrum-snapping sound waves within a narrow arc, was originally designed to deter pirates and terrorist attacks against US warships by speedboats, such as that which devastated the USS Cole in Aden, Yemen, in 2000. However, it was on the streets of Iraq starting in 2004 that the LRAD became a proven crowd control weapon.

Some of the other equipment provided to police has included Mine Resistant Ambush Protected (MRAP) vehicles, built to withstand landmines and improvised explosive devices (IEDs), as well as OH-58 Kiowa, UH-60 Black Hawk and UH-1 Iroquois “Huey” helicopters used as gunships, medevacs and for transport and observation.

The program has also transferred a host of small arms, including tens of thousands of assault rifles and bayonets, along with more than 200 grenade launchers, and even huge .50-caliber sniper rifles capable of penetrating 2 inches of solid concrete.

After the Ferguson, Missouri, protests in 2015 that followed the death of Michael Brown at the hands of city police, the 1033 program jumped into the national spotlight and drew heavy criticism. Then-US President Barack Obama established new guidelines for the 1033 program with an executive order that saw police stations return some of the more dangerous equipment, including 126 vehicles, 138 grenade launchers and 1,623 bayonets, according to the New York Times. However, in 2017, US President Donald Trump reversed this move with his own executive order.

© AP Photo / Jeff Roberson
Police in Ferguson, MO, draw weapons next to a BearCat armored vehicle on August 18, 2014. during protests over the police killing of Michael Brown.

The 1033 program suffers from an appalling lack of oversight. For example, in 2017, the Government Accountability Office (GAO), a congressional watchdog agency, blasted the DLA after it was able to procure $1.2 million worth of items, including night-vision goggles and training versions of rifles and pipe bombs, through the 1033 program by creating a fake government agency. The system is also notoriously riddled with holes that embezzlers and fraudsters have abused to their advantage.

Although it is not written into the letter of the law, one standardized memorandum of agreement obtained by the ACLU, with blanks for applicants to fill in their state, says that equipment received from LESO “must be placed into use within one (1) year of receipt and utilized for a minimum of one (1) year.” This further encourages use of these weapons against civilians.

American Civil Liberties Union (ACLU)
A US Defense Logistics Agency (DLA) memorandum of agreement for states requesting military equipment for their police forces through the 1033 program.

The DLA isn’t the only avenue by which the US government provides military weapons to police. The Department of Homeland Security (DHS) gives out $1.1 billion in grants per year under three separate programs: the State Homeland Security Program (SHSP), the Urban Areas Security Initiative (UASI) and the Operation Stonegarden border security program.

For example, several police departments in the border state of New Hampshire have received between $215,000 and $286,000 in free money to buy Ballistic Engineered Armored Response Counter Attack Truck (Bearcat) armored personnel carriers. One, the Keene Police Department, justified its successful grant application under the nebulous truism that terrorist threats are “far reaching and often unforeseen” and might seek to target the state’s Pumpkin Festival.

Ironically, rowdy festival attendees in 2014 taunted the police with “bring out the Bearcat,” with many observers pointing to the unnecessary militarized police presence at the festival as a catalyst for the social unrest that ensued, causing 30 injuries and leading to 120 arrests.

In all, the DHS grant program has supplied US police forces with some $34 billion in terrorism-related grants since its creation in 2002.

Part 2, "Crafting the Warrior Cop: How US Police ‘Brought the War Home’ as a Paramilitary Force," can be found here.