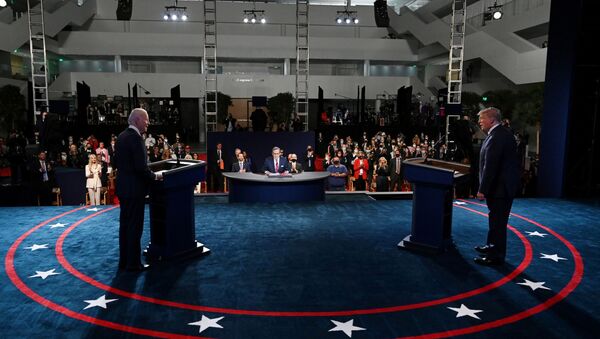 According to Rachel Cossar, a presence and body language expert, Trump's posture, way of looking at Biden as well as his manner of speaking, marked by constant interruptions of other people, indicated a clear desire to dominate over his opponent. Biden, on the other hand, was less aggressive and trying to communicate with the viewers instead of his opponent, whom he aimed to discredit as a non-serious candidate.

"Overall, you see the biggest contrast in Trump vs Biden following their first initial 2 minutes of remarks to the question of the Supreme Court nominee. Once Trump begins to interrupt, the debate becomes a battle of Trump attacking and largely dominating the attention of the debate with Biden working hard to maintain composure and connection with the people watching through the lens", Cossar said.

This assessment is echoed by Dr Louise Mahler, an Australia-based leadership influencer, speaker, coach, body language and vocal intelligence expert, who notes that POTUS' tactic was to let his Democratic rival "speak in part, then interject, which saw Biden time and again pause, close his eyes and engage with Trump directly, deflecting away from his message."

"Biden and Trump are men of contrasts, Trump speaks loudly, strongly and constantly. Biden has no vocal gravitas, so when he says, ‘We can defeat racism in America’, it sounds like a fairy tale," she says.

According to Dr Mahler, Trump was turned for "90% of the time" towards moderator Chris Wallace, "only gesturing towards Biden, in a movement of disrespect."

Trump and Biden clashed in the first presidential debate on Tuesday evening, with moderator Chris Wallace failing to make them comply with time limits set for each candidate and avoid mutual insults.

The two politicians engaged in a heated discussion, polarising on almost every issue put forward at the debate, including coronavirus response and social unrest. During the debate, Biden said Trump is a "clown" and the "worst president we've ever had" and repeatedly asked him to "shut up".

Trump said that Biden was misled by the Democratic leadership, including those who pursue "socialist" policies, and claimed Biden lacks the stamina to do what he has done for the United States, namely, in terms of the pandemic.

The next debates are scheduled for 15 and 22 October. One debate between Vice President Mike Pence and Biden's running mate Kamala Harris is set to take place on 7 October.