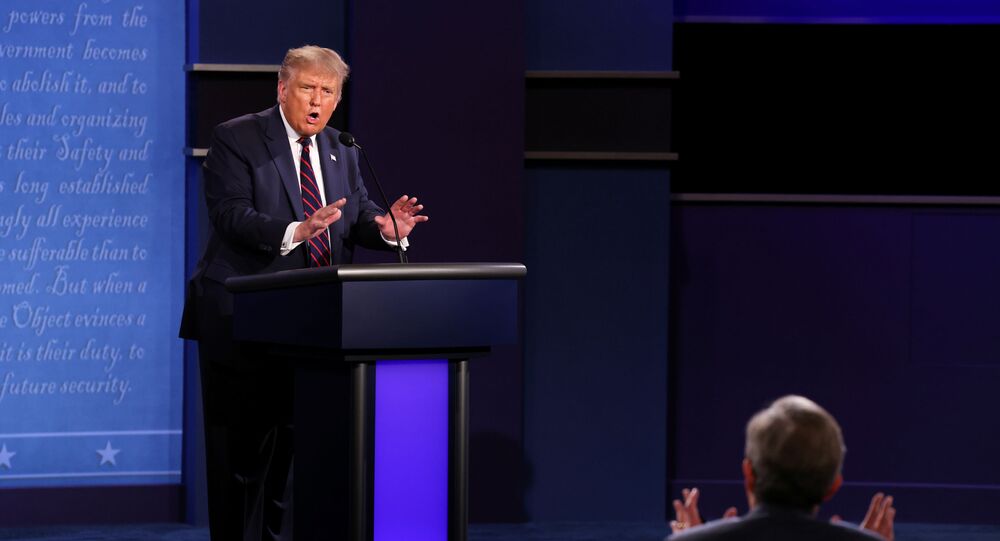 Regardless of one’s impression of the two contenders during the first in-person showdown between the candidates to occupy the Oval Office, both conservative and liberal commentators agreed on one thing – the debate moderator’s job left much to be desired.

“Chris Wallace is embarrassing, and trying to pretend that the problem isn’t 100% Trump”, former Democratic Senator Claire McCaskill tweeted after the 90-minute showdown, which saw both rivals break the agreed debate rules and ignore the allotted speaking time.

“That was the worst presidential debate I have ever seen in my life”, ABC's political anchor George Stephanopoulos weighed in, with another representative of the mainstream media, CNN correspondent Jake Tapper, lambasting the event as “a hot mess, inside a dumpster fire, inside a train wreck”.

As Wallace could be heard in the background hushing “Mr President, Mr President”, trying to get Trump to wait for his turn to have his say, quite a few deemed this as a failed effort to mediate the tumultuous exchange.

“Chris Wallace just gave the most embarrassing moderator performance in history”, one netizen shared, with others butting in with similar views:

Oh my God.
Chris Wallace has totally lost control of this thing.
He’s allowing Trump to behave like schoolyard bully, completely disrespecting the millions of Americans who tuned-in hoping to see a debate of ideas, and a plan to move America forward.

Chris Wallace was a terrible moderator. It wasn't just that he got steamrolled & didn't enforce the rules. It's that most of his questions flowed from the Fox News / white grievance framework. He described Biden's economic plan "big government, big spending." A complete failure.

One hour and 13 minutes into the debate, the moderator reminds the president that he’s been violating the rules he agreed to.

“Chris Wallace is a hack…purposefully conflating mail-in ballots and absentee ballots”, Gaston Mooney, president of Blaze Media, opined. “Either hack or incompetent. No other option”, he fumed.

However, there were those who believed there was no way that Wallace could have actually entirely succeeded in fulfilling his ultimate goal.

“People are hating on Chris Wallace but I think there was no way to moderate this debate effectively”, business journalist Josh Barro tweeted, with some others feeling almost the same:

“I am not sure what moderator would be forceful enough to shut Trump down”, a user tweeted.

Some, meanwhile, suggested that Wallace had made his “bias” visible, which is hardly acceptable for a journalist and a debate moderator.

After several mild arguments between Trump and Wallace, Turning Point USA founder Charlie Kirk wrote that Trump “shouldn’t have to debate both Chris Wallace AND Joe Biden”, while one of Wallace’s Fox News colleagues, Ingraham Angle host Laura Ingraham, rushed to note throughout the heated talk that President Trump appeared to be debating Wallace instead of Biden.

POTUS appears to have had a similar impression. At one point during the hugely anticipated pre-election event, following several arguments between Biden, Trump, and Wallace, the incumbent president butted in:

“I guess I’m debating you, not him, but that’s OK. I’m not surprised.”

Meanwhile, Biden, in his turn, seemed frustrated with the moderator failing in his attempts to rein in Trump when it was his turn to talk.

“It’s hard to get a word in with this clown”, Biden complained.