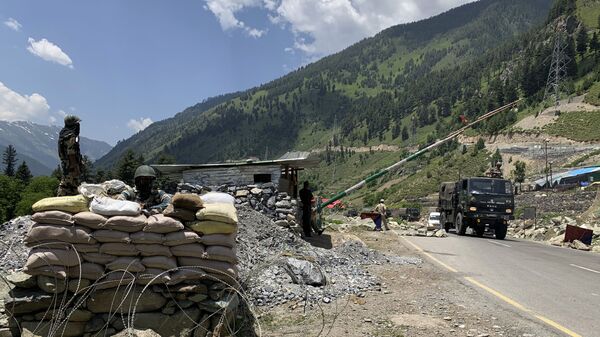 Rishikesh Kumar
All materialsWrite to the author
Despite several rounds of talks to defuse tensions in the Ladakh region, India and China have failed to reach a consensus on disengagement. Meanwhile, the two sides have made massive deployments of military assets in the Himalayan region.

India vehemently opposed a claim by China’s Foreign Ministry on Tuesday about the Line of Actual Control along the length of its around 3,500 km border.

“India has never accepted the so-called unilaterally defined 1959 Line of Actual Control (LAC). This position has been consistent and well known, including to the Chinese side”, Anurag Shrivastava, spokesperson for the Indian Foreign Ministry, replied to Beijing, which termed Ladakh as an “illegal territory” established by the Modi government.

China-India Border Tension Could 'Extend to Winter'
Mentioning the three agreements (1993, 1996, 2005) signed between the two countries in the last three decades, Shrivastava underscored that “both India and China have committed to clarification and confirmation of the LAC to reach a common understanding of the alignment of the LAC”.

“Therefore, the insistence now of the Chinese side that there is only one LAC is contrary to the solemn commitments made by China in these agreements”, Shrivastava added.

The two countries signed the Agreement on Maintenance of Peace and Tranquillity along the LAC in 1993, then in 1996 the Agreement on Confidence Building Measures (CBMs) in the military field, and then in 2005 the Protocol on Implementation of CBMs and the 2005 Agreement on Political Parameters and Guiding Principles for settlement of the India-China Boundary Question.

Earlier this month, Indian Defence Minister Rajnath Singh stated in the parliament that it is the Chinese side that has tried to unilaterally alter the status quo in the region with several attempts at transgressions.

From April to May this year, there was an enhanced deployment of troops and armaments by the two sides in the border areas and along the Line of Actual Control (LAC) in the Western Sector.

The sides accused each other of violating the consensus reached in the first week of June to defuse the tensions. A violent face-off erupted in the late evening and night of 15 June in which 20 Indian soldiers were killed. After the violent clash in the Galwan Valley, the two sides continued their engagements to comprehensively address the issues arising due to these developments.