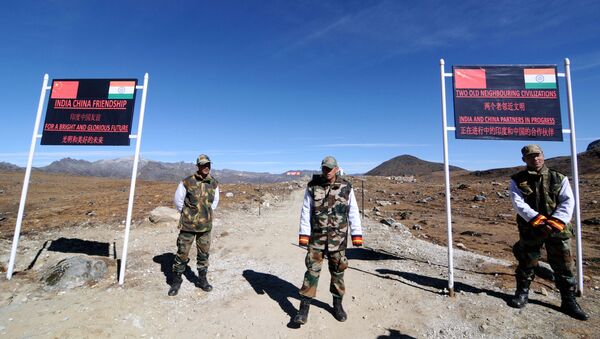 © AFP 2021 / BIJU BORO
Subscribe
In a speech before the Indian parliament on Tuesday, Indian Defence Minister Rajnath Singh asserted that the border dispute with China remains "unresolved" for now, and blamed China for "violating" the border agreement with India.

Chinese experts warned on Tuesday that such a hard-line attitude may see border tensions extend into winter.

Chinese analysts noted that Singh is trying to ensure domestic support and defence budgets from parliament, especially amid the unprecedented economic recession, so he won't admit that it was India which took the initiative to violate the agreement and unilaterally change the status quo.

But the Indian defence minister on Tuesday also said India is committed to a peaceful resolution of the current border stand-off with China in Ladakh, according to the Times of India.

Hu Zhiyong, a research fellow at the Institute of International Relations of the Shanghai Academy of Social Sciences, told the Global Times on Tuesday that "the Indian army is facing great pressure as winter approaches, with the logistical costs potentially being huge, and due to a horrible economic recession, Indian leaders understand that they are unable to launch a war against China."

Data released by the National Statistical Office of India on August 31 showed India's GDP in the April-June quarter of 2020-21 slumped 23.9 percent. Among major economies, India's contraction was the sharpest, the Times of India reported.

"But in the Indian military, most soldiers are of low caste, so even if they suffer hundreds of non-combat casualties every year in the stand-off with Pakistan due to cold weather, the government can still bear the pressure as the decision-makers don't really care about the lives of low caste individuals," Hu said.

New Delhi is likely to let Indian troops do the same in Ladakh, and the People's Liberation Army (PLA) should be prepared for a long-term stand-off with tensions likely extend into winter, Hu noted, adding that although India dares not fight a war, small provocations would happen occasionally.

Singh assured members of parliament that Indian troops are "ready to deal with any situation," despite the current situation being very different from what India has had to encounter previously in terms of troops and the number of friction points. He laid the blame of escalation on "China's actions," according to Indian media Business Insider.

"Chinese forces have been engaging in violent conduct. They have increased troop numbers and weaponry," said Singh. Highlighting the points of friction - like eastern Ladakh, Gogra, Kongka La, and Pangong Lake's north and south banks - he accused China of violating the 1993 and 1996 agreements the two countries reached.

"Singh is telling the parliament that the long-term stand-off would be costly and Indian taxpayers should pay more to support the military, but in fact, it was Indian troops who broke the agreements numerous times, by firing into the air on the border and attacking Chinese soldiers to escalate tension, and the Indian military should be held accountable for the unnecessary spending and casualties," said a Chinese expert who is familiar with the matter but requested anonymity.

Liu Zongyi, secretary general of China and South Asia Cooperation Research Center at the Shanghai Institutes for International Studies, told the Global Times on Tuesday that, until today, India has deployed more troops than the Chinese military in the border region, and the 1993 and 1996 agreements between the two countries stated that the two sides are not allowed to use guns on the border, but it was the Indian military who broke the agreement first on 8 September.

India believes that it has more frontline troops, and has prepared for a longer period of time, and that it is competent enough to win against the PLA. This is an illusion, Song said, noting that instigation from the US and India's domestic factional struggle will not let India realize its actual situation.

Due to this illusionary confidence, India has already provoked China by crossing the LAC into the Chinese side. If it does not leave and all diplomatic attempts fail, the PLA will be left with no other choice but to push them out by force, Song said. The PLA, unlike the Indian army, is not overconfident, but aware that it can deal with the Indian aggression, Song said.

The PLA, unlike the Indian army, is not overconfident, but fully aware that it can deal with Indian aggression, Song said.

China's military strength, including that in the border region, is far more superior to that of India in key areas including equipment, logistics, tactics and strategies, analysts said.

Liu said the Indian defence minister's speech on Tuesday showed that the Modi administration is facing heavy domestic pressure, and now they are suffering from a dilemma. Launching a war against China will see it defeated badly, but withdrawing its troops to end the tension will disappoint domestic nationalists.

"This is very similar to the situation before the 1962 China-India border conflict, which is not a good sign for the two sides to solve the issue peacefully," Liu further said.