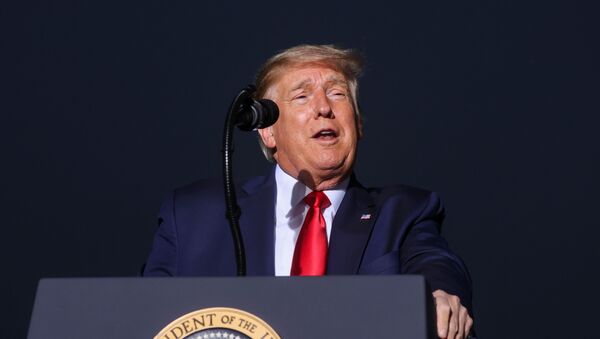 Tim Korso
All materials
Despite opposition from local authorities led by Democratic Governor Steve Sisolak, Trump has held a rally in a key battleground state where he lost by a small margin in 2016 and where he is now trailing by 4%, according to recent polls.

Speaking to his supporters at a rally in Minden, Nevada, Trump, as usual, didn't mince his words when it came to criticising his political opponents – specifically Joe Bidden and the Democratic Party. However, this time he was even more relentless due to being infuriated, to put it mildly, by a derogatory ad that Biden's campaign rolled out just a day prior to the event.

'I Don't Have to be Nice Anymore' to Biden

Biden's advertisement, playing on the notion of an anonymous report claiming that Trump had called US soldiers who died in the First World War "losers", was one of the topics that POTUS returned to several times throughout his speech in Nevada. He slammed the ad as the "most vicious TV commercial [he has] ever seen" in a tweet posted ahead of the rally and returned to the issue during his speech, saying that after such a low blow from Biden, he no longer feels constrained in his words about his opponent and the rest of the Democratic Party.

"I can be bad to him because he'd put the most vicious ad on TV that I have ever seen. […] [Joe Biden] is a pathetic human being to let that [ad] happen. […] But you know the good part? Now I can be really vicious. Once I saw that ad, I don’t have to be nice anymore. I really mean it", Trump said.

POTUS went on to berate the report itself, slamming it as fake and baseless, while condemning The Atlantic, which published the story based on the account of an anonymous source, as a "third-rate magazine". Trump went on to state that nobody "loves [the US] military, respects it" more than him.

'Radical Left' to Run US If 'Unable' Joe Wins

In line with his promise, the president did not pull any punches, especially when it came to questioning Joe Biden's mental capabilities. Trump referred to a report suggesting that in Biden's late April interview, the Democratic candidate only did as well as he did due to having a teleprompter, which could purportedly be seen in the reflection on a framed photo the former vice president was showing.

"The worst part about that is not the fact that he is [using the teleprompter], cause let's face it – he is unable. It's that the 'fake news' would give him the questions", POTUS said.

Trump added that Biden is "shot" and alleged that if the Democratic nominee were to be elected, the former vice president would be "locked up", while the "radical left" Democrats would control the country. The GOP candidate then painted a grim picture, predicting that being a puppet in their hands, Biden would raise "taxes so high he would eradicate your economy".

Trump, slurring, calls Joe Biden "a pathetic human being." If a guy sounding like this approached you on the other street, you'd run the other way. pic.twitter.com/cIcnxolFGQ

According to POTUS, exorbitant taxes wouldn't be the only woe to afflict the US if the Democratic nominee is victorious – he also predicted that the violent protests taking place across the country would continue, adding that a Biden win would be a win for the "rioters, anarchists, arsonists [and] flag-burners". The president condemned the Democratic candidate and his party's alleged double standards, suggesting that they are ready to put every city on lockdown, with the exception of those where protests and riots are taking place. 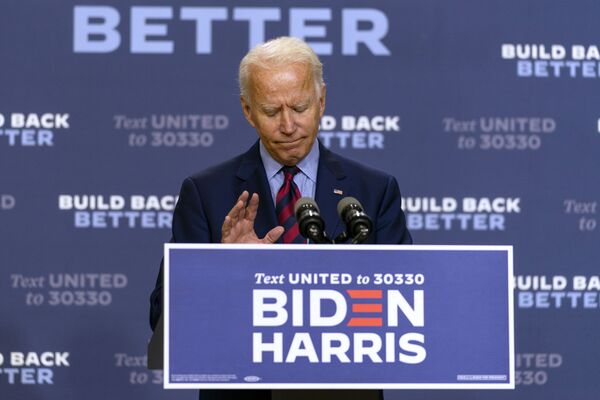 Trump went on to allege that another party that would profit from the former vice president being elected is China. He accused Biden of "selling out America" throughout his political career by allegedly supporting the trend of outsourcing US companies' operations to foreign countries, including to China. POTUS then stressed how he has done the opposite by "securing" jobs in the US, apparently referring to his initiatives to incentivise American companies to "bring back" their operations to the US. Trump also repeatedly highlighted how he has "stood up" to Beijing over the course of his first term, namely by slapping Chinese goods with tariffs and negotiating the Phase One trade deal with the country, something which strongly favours American farmers.

"The bottom line is: if we win – America wins, that's what's happening. Nobody has done to China, what I did. Tens of billions of dollars of tariffs we took in. I gave $28 billion to farmers, the farmers are doing very well. […] You think Joe Biden would even think about it? He wouldn't. No, he is more worried about does he have a teleprompter to answer a reporter's question", POTUS summed up.

Speaking at the Nevada rally, Trump also repeatedly raised the issue of mail-in voting in November and how it could allegedly be used by the Democratic Party to rig the election. Trump namely accused Nevada Governor Steve Sisolak of creating obstacles for him to hold the rally and alleged that the head of the battleground state would do even more on 3 November to keep it blue. 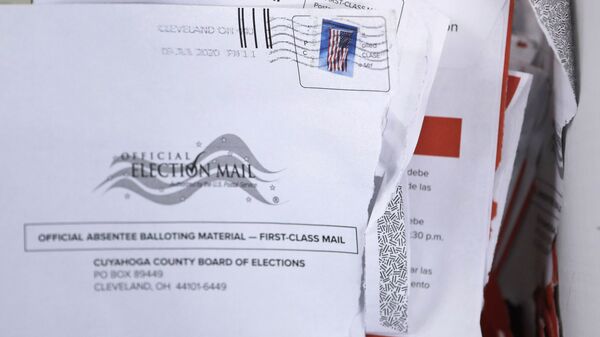 Applications for voter ballots are seen at the Cuyahoga County Board of Elections Tuesday, July 14, 2020, in Cleveland
© AP Photo / Tony Dejak

The president went on to double down on his allegation that the Democrats can only win if they "rig" the election by means of mail-in voting, and expressed his view that they are going to try to pull it off. Apart from suggesting that mail-in ballots not verified by a voter's signature may be susceptible to manipulation, Trump alleged that Democratic governors might only send out ballots to registered Democratic voters and not Republican ones, thereby trying to boost their own supporters' turnout.

The GOP nominee added that if the Republicans are to win the November vote, they may need to change tactics.

"The Republican Party does not play it rough and tough like those people. They don't play it the same way. They are too nice. […] We play it so nice and in the end it's not right, because what they get away with..." Trump said.

POTUS also directed criticism at the polls, some of which continue to suggest that he is either trailing behind Biden or is tied with him in the main swing states. Trump suggested that these are "suppression polls" that are designed to "discourage" voters from supporting the GOP's candidate. He went on to recall the 2016 campaign, when the polls similarly suggested that Trump would be defeated by Clinton, but "fortunately" failed to discourage voters from giving him the victory.

Apart from berating his political opponents, Trump also took aim at the mainstream media, accusing them of abandoning the notion that news outlets should be accurate in their reporting and claiming that they are discriminating against him.

"In the old days, I think it still should be, news had to be reasonably accurate, right? Today they can do whatever the hell they want. It is fake news and it's a disgrace. It is hurting our country. The biggest problem that this country has is 'fake news media', worse than the Democrats", Trump said.

POTUS went on to complain about the fact that even though he had been nominated for the Nobel Peace Prize twice in just a week for his recent diplomatic efforts, this had received “zero time” on the nightly news. Trump specifically slammed the ABC, CBS, and NBC news broadcasters as "corrupt" media.