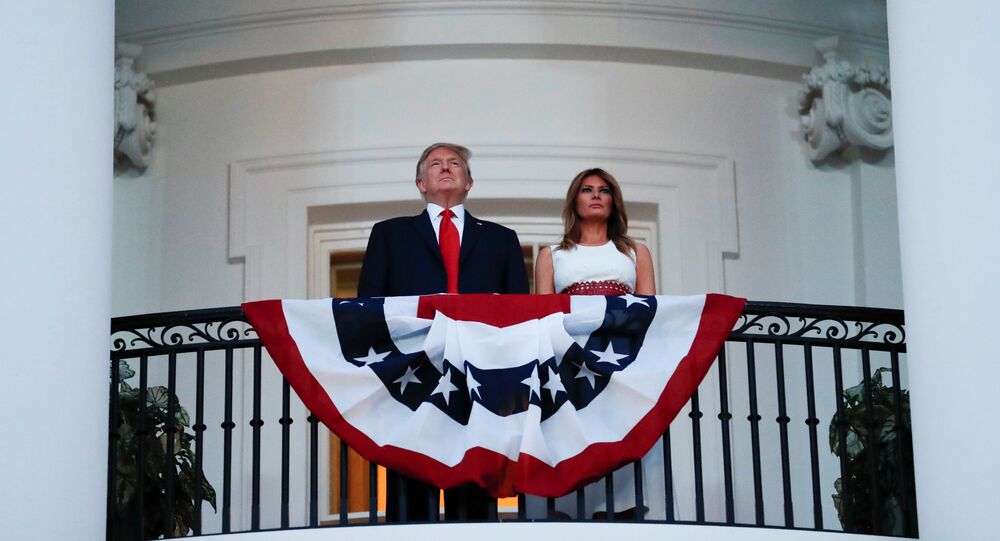 This year, the United States celebrates its Independence Day amid the ongoing coronavirus pandemic and the impact of a massive anti-racism and anti-police-brutality movement spanning the entire country and raising many controversial issues.

Delivering a speech at the South Lawn of the White House during the Salute America celebratory event, US President Donald Trump echoed his performance at an earlier rally at Mount Rushmore, insisting on the importance of preserving history and uniting America, and denouncing a "radical left" and media who, according to Trump, are "slandering" these efforts, while also defending his COVID-19 strategy by, as he has traditionally done, blaming China.

Addressing a "radical left" in the US, Trump insisted that the group are being "defeated" alongside "Marxists, the anarchists, the agitators, the looters and people who in many instances have absolutely no clue what they are doing", referring to some of participants of nationwide anti-police-brutality and anti-racism protests that at several points have become violent, resulting in attacks on historical sites and Confederate heritage and symbols.

"We will never allow an angry mob to tear down our statues or erase our history [...] We are now in the process of defeating the radical left, the Marxists, the anarchists, the agitators, the looters, and people who in many instances have absolutely no clue what they are doing", Trump said, addressing his audience on the nation's 244th birthday.

Earlier, during a speech at the Mount Rushmore rally, he slammed the "radical left" for launching a "merciless campaign to wipe out our history", accusing them of "engaging in totalitarian behaviour that is completely alien to American life".

Echoing the Rushmore speech, Trump stated that he would "defend, protect and preserve the American way of life".

"We are Americans, and we never back down, and we never give in, and we never give up. We will defend, protect, and preserve American way of life - which began in 1492 when Columbus discovered America", the president insisted, praising "American heroes" such as George Washington, Thomas Jefferson, Frederick Douglass, Abraham Lincoln and many more.

Vowing that the Rushmore monument "will never be desecrated, these heroes will never be defaced", Trump announced the creation of a “vast” new monument park, to be a so-called National Garden of American Heroes, to house statues in tribute to “the greatest Americans to ever live".

POTUS did not omit his hatred of the media in his speech, "who falsely and consistently label their opponents as racist". He condemned some in the media for, in his opinion, trying to put the blame on him by producing coverage regarding the Confederate monuments, outlining that by attacking historical symbols, outlets "slander" not only him, but "generations of heroes who gave their lives to America".

"When you level these false charges, you not only slander me [...] you also slander generations of heroes who gave their lives to America [...] The more you lie, the more you try to divide, the more we will try to tell the truth, and we will win. The more you lie [...] the more credibility you lose", Trump declared.

Refuting accusations of racism, Trump insisted that "we will not allow anyone to divide our citizens by race or background", stressing on the idea of US unity "no matter our race, color, religion, or creed", promising a corresponding response for attempts to "slander" him, American people and their ancestors.

"The more bitter you become, the more we will appeal to love and patriotism", he said.

Trump's remarks on his coronavirus response fell in line with his traditional policy of blaming China for the virus, and claiming that the US had been thriving until it "got hit by the virus that came from China".

He also praised his administration's strategy to deal with the ongoing deadly pandemic as "moving along well", touting a system of testing and "progress" that has, according to the White House, been made.

“We’ve made a lot of progress. Our strategy is moving along well […] We have the finest testing in the world. With respect to remedies, we are now doing unbelievably well. We will likely have a therapeutic or vaccine solution long before the end of the year", Trump suggested.

Promising a vaccine and praising his administration's approach to addressing the ongoing second wave of the pandemic, Trump stated: "we've learned how to put out the flame".

“It goes out in one area, it rears out its ugly face in another area. But we’ve learned a lot. We’ve learned how to put out the flame", he said.

Earlier, Trump tweeted that the "Fake News Media" was accusing him of the high number of COVID-19 cases, and offered that the mortality rate, which he described as "going down", is more important when it comes to assessing the response.

....In a certain way, our tremendous Testing success gives the Fake News Media all they want, CASES. In the meantime, Deaths and the all important Mortality Rate goes down. You don’t hear about that from the Fake News, and you never will. Anybody need any Ventilators???

Despite fear of the ongoing coronavirus pandemic, Independence Day celebrations have seen no social distancing, although the White House noted that this year's commemoration would have "a different look".

Apart from COVID-19, the Trump administration is dealing with a sweeping anti-racism and anti-police brutality movement that has rocked the entire country. The movement has seen increasing numbers of Americans demand change, a "cancelling" of some historical symbols and attacks against those who oppose the idea - something that Trump slammed as "far-left fascism that demands absolute allegiance".