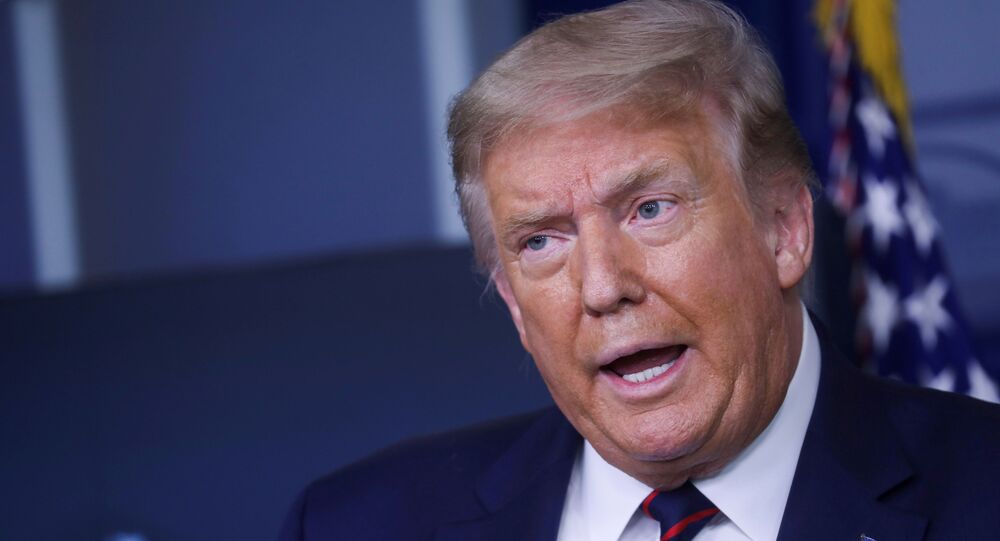 The president has on more than one occasion criticised his likely opponent in the presidential election for his public gaffes, using them to justify the claim that Biden is unfit to lead the country.

US President Donald Trump has gone on another Twitter tirade against presumed Democratic presidential nominee Joe Biden, once again questioning his mental capabilities, with less than 100 days separating them from a showdown on election day. Trump recalled Biden's gaffe on 15 July, when he called the state of Arizona an "important city" during a speech devoted to the handling of the coronavirus pandemic.

This week you had Joe Biden call Arizona a CITY. Nothing matters with him, however, because the Opposition Party (Lamestream Media) covers everything up - especially the corruption. The Obama/Biden Administration is the most corrupt in history. They even spied on my campaign!

Trump also alleged that the "Lamestream Media" would cover up the unpleasant story, arguing that they are used to doing this kind of thing, especially when it comes to the corruption of members of the Democratic Party. POTUS didn't stop there either, posting two more tweets, taking swipes at Biden in both of them.

Crazy Nancy Pelosi said I made a mistake when I banned people from infected China from entering the U.S. in January. Tens of thousands of lives were saved, as she danced in the Streets of Chinatown (SF) in late February. Biden agreed with her, but soon admitted that I was right!

Namely, he recalled Biden criticising Trump's decision to limit the entry of Chinese citizens to the US in January, which stood in stark contrast with the recommendations of the World Health Organisation. POTUS also claimed that his 2020 campaign has "more enthusiasm" than any other in US history, including his own in 2016, while alleging that Biden's campaign has "none". In this light, Trump once again cast doubt that his Democratic opponent stands any chance of winning the presidency in November.

The Trump Campaign has more ENTHUSIASM, according to many, than any campaign in the history of our great Country - Even more than 2016. Biden has NONE! The Silent Majority will speak on NOVEMBER THIRD!!! Fake Suppression Polls & Fake News will not save the Radical Left.

This is not the first time that President Trump has questioned Biden's mental capabilities based on the latter's numerous public gaffes. POTUS has urged Biden to take a cognitive test to prove him wrong, while boasting that he "aced" one recently. This didn't stop Trump, however, from mixing weeks up, saying that Biden's Arizona gaffe happened earlier "this week", while, in fact, it took place on 15 July.