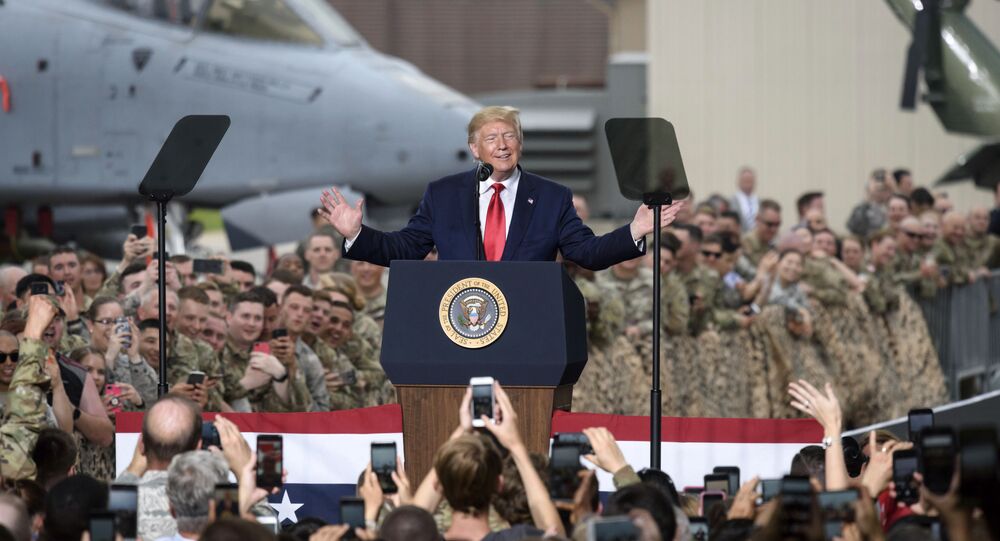 On Friday, Defence Secretary Mark Esper defended President Donald Trump over claims that POTUS belittled the sacrifice of dead US soldiers by making disparaging comments about them.

More than 600 American army veterans have released an open letter to signal their support for Donald Trump after the magazine The Atlantic berated the US president for allegedly making disrespectful remarks about dead American servicemen.

"Recent baseless media attacks against President Trump from anonymous sources are just another example of the depths to which the president's opponents are willing to descend to divide the nation and meddle in this [2020 presidential] election", the letter, obtained by the news website Breitbart, read.

The document added that "anyone who knows President Trump has seen his love and reverence" for the US military and veterans, which is why 674 of them, namely "the veterans from every generation", decided to reaffirm their support for POTUS.

The letter singled out "the false and baseless allegations" made by The Atlantic with respect to Trump's cancelled visit to a military cemetery, accusing the mainstream media of launching "this baseless attack against President Trump".

"[….] They know Joe Biden's record [on military- and veteran-related issues] simply does not stand up to scrutiny, and they seek to distract the American people from that fact", the letter read.

The veterans also praised Trump's "tireless efforts" to bolster the US military community, which they claimed are "part of his indisputable record".

"He has done more for our nation's service members and veterans than any previous administration. The veteran community firmly rejects these lies from the mainstream media, and we stand by our Commander-in-Chief, now, and on Election Day", they concluded.

This was echoed by US Defence Secretary Mark Esper who touted Trump as a person who "has the highest respect and admiration for our nation's military members, veterans, and families".

The remarks followed The Atlantic citing several unnamed sources as saying that in November 2018, POTUS refused to visit a First World War cemetery in France because he described dead American soldiers as "losers".

"Why should I go to that cemetery? It's filled with losers", Trump allegedly said at the time, referring in a separate conversation to the more than 1,800 US marines who lost their lives at the 1918 Battle of Belleau Wood in France as "suckers".

© AP Photo
Why Trump-Biden Polls Shouldn't be Seen as Predictors for 2020 Presidential Vote Outcome
The Atlantic article also included unconfirmed claims that the US president did not want to grant state honours to late Arizona Senator John McCain after his death from brain cancer in 2018, also describing him as a loser.

In a series of tweets on Thursday evening, Trump called the whole story "fake news" and denied he had ever shown disrespect for McCain, despite their political disagreements.

Democratic candidate Joe Biden, for his part, seized on The Atlantic piece to accuse Trump of being unfit for office.

"If what is written in The Atlantic is true, it's disgusting. It affirms what most of us believe to be true, that Donald Trump is not fit to be the commander-in-chief", Biden claimed.