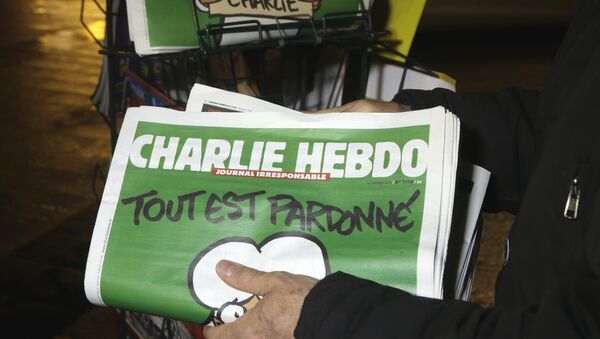 Ilya Tsukanov
All materialsWrite to the author
Muslims across the world, including Iran, Indonesia, Pakistan, Yemen, Nigeria, and France have taken to the streets in recent days to protest French satirical magazine Charlie Hebdo’s republication of a series of ‘blasphemous’ cartoon depictions of the Prophet Muhammad, the central figure of the Islamic faith.

Iranian Supreme Leader Ayatollah Ali Khamenei has weighed in on Charlie Hebdo’s decision to republish a dozen cartoons depicting the Prophet Muhammad, suggesting that the move shows the hostility of Western governments and their allies toward the Muslim world, and dismissing the ‘freedom of expression’ defence made by some French politicians.

“The grave and unforgivable sin committed by a French weekly in insulting the luminous and holy personality of [the Prohet] revealed, once more, the hostility and malicious grudge harboured by political and cultural organizations in the West against Islam and the Muslim community,” Khamenei suggested, his remarks published on his official Twitter account.

“The excuse of ‘freedom of expression’ made by some French politicians in order not to condemn this grave crime of insulting the Holy Prophet of Islam is completely unacceptable, wrong and demagogic,” Khamenei added, referring to French President Emmanual Macron’s refusal earlier this month to “pass judgement on the editorial choice” made by Charlie Hebdo to republish the cartoon, citing France’s “freedom of the press” laws.

“Zionists and arrogant powers’ anti-Islamic policies are behind such hostile moves emerging every now and then. This insult at this time can have another motive: to divert West Asian nations and states’ attention away from evil plots [which the] US and Zionist regime are hatching for [the] region,” Khamenei warned, without elaborating on what these plots may be.

Last week, Charlie Hebdo announced the republication of cartoons depicting the Prophet Muhammad which served as the central motive behind the January 2015 al-Qaeda terror attack in Paris which killed twelve people, including several of the satirical magazine’s cartoonists. The magazine republished the images in response to the start of a two month-long trial of 14 suspects believed to be linked to the attack. In an editorial, the magazine said it felt the need to republish the cartoons as “evidence to readers and citizens” as the trial begins, and suggested that “not republishing the caricatures would have amounted to ‘political or journalistic cowardice.’”

The move to republish the cartoons has sparked widespread condemnation across the Muslim world, with tens of thousands of people taking to the streets in multiple countries in the Middle East, Asia, and France itself to protest the depictions, which are considered blasphemous under Islamic laws.

Iran, which has helped Syria wage a war against al-Qaeda and other Islamist terror groups, denounced both the publication of the cartoons and the 2015 Paris terror attack, with Ayatollah Khamenei penning an online open letter “to the youth in Europe and North America” in which he called on young people to study Islam for themselves, and urged them not to associate the religion with terror groups which he claimed were a creation of Western governments.

* Terror groups outlawed in Russia and many other countries.