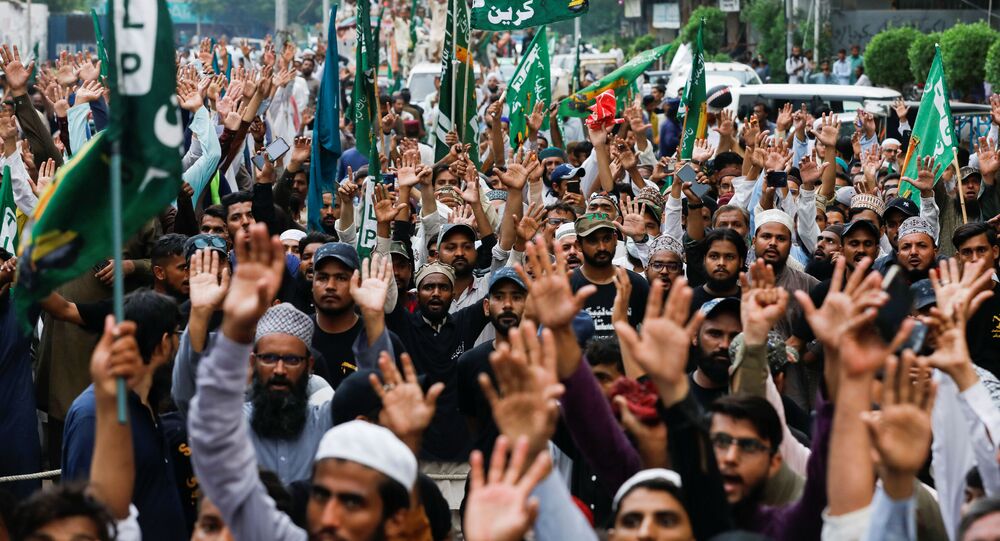 Charlie Hebdo gained worldwide attention after the January 2015 terrorist attack on its Paris headquarters that killed 12 people, including its editor. The attack is believed to have been triggered by the outlet's publication of cartoons featuring the Prophet Mohammad.

Thousands of people have taken to the streets across Pakistan to protest against the French satirical weekly Charlie Hebdo's decision to re-publish cartoons of the Prophet Mohammad.

The protesters are carrying various placards condemning the outlet's move, with some reading that "Decapitation is the punishment of blasphemers".

Videos of the protests have been published on various social media platforms.

​"It amounts to big terrorism; they repeat such acts of blasphemy against Prophet Mohammad every few years. It should be stopped", Razi Hussani, the Islamist political party Tehreek-e-Labbaik Pakistan's (TLP) district leader in Karachi, said.

Earlier this week, the magazine revived the cartoons to mark the start of the trial of suspected accomplices in the terrorist attack on its Paris office in January 2015 that left ten journalists, including the editor as well as two police officers, dead. The attack is believed to have been motivated by the outlet's publication of cartoons of the Prophet Mohammad.

The publication of the cartoons was severely condemned in the Islamic world, provoking outrage and riots, as according to many Muslims, drawing living creatures is prohibited, so they refrain from drawing the Prophet Mohammad or any other religious figures.

Previous campaigns that included drawings of the Prophet Mohammad have been met with threats from Muslims, including Islamist terrorists.