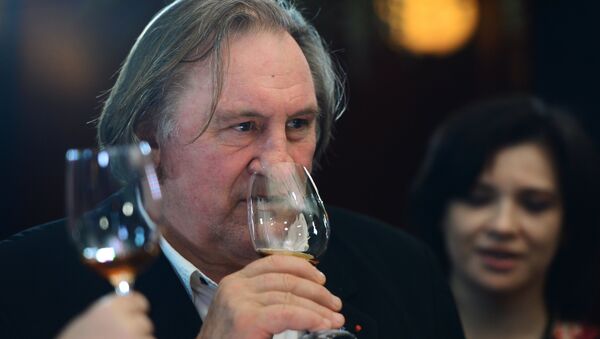 Muhammad Osman
All materialsWrite to the author
Police department officers, who stopped the French film star and ordered him to drive to a nearby police station, were not aware that the individual they had stopped was Gerard Depardieu, as he was wearing a helmet during a Friday scooter ride in one of the central districts the French capital of Paris.

Paris police on Friday stopped iconic French actor Gerard Depardieu, who was reportedly riding a scooter while drunk, and drew up a report on the violation, Le Point magazine reported, citing police.

According to the magazine, Depardieu was riding a scooter on the Avenue du Maine on Friday, and violated traffic rules. Police said that the actor drove outside road lines and ran a red traffic light. The police officers, who did not know that they had stopped Depardieu, demanded that the man drive to a nearby police station.

The officers suspected that the individual was drunk, prompting them to ask him to take an alcohol test, which reportedly gave a positive result and showed an excess of the limit of 0.25 milligrams per liter of exhaled air.

When the man took off his helmet, law enforcement officers realized that it was Depardieu. The actor told police that he had drunk a couple of beers before hitting the road.

The officers reported this to their superior. A duty officer then visited the scene from the police headquarters. Also, as the law enforcement officers wrote in their report, a commissioner of a so-called security and intervention company contacted them and demanded “not to draw up a protocol against Mr. Depardieu.” Following the orders, the officers reportedly stopped the proceedings.

However, a second alcohol test, performed at the police station, gave a result of 0.40 milligrams per liter of exhaled air. Eventually, police told the magazine that it was decided to draw up a protocol against the two-time winner (1981 & 1991) of the Cesar Award for Best Actor.

The police detained Depardieu's scooter as well, and the actor was taken from the station by friends. Depardieu, who has Russian citizenship as well as French, said at the police station that he no longer wants to be French and prefers Russia, and its president, Vladimir Putin, according to Le Point.

It was not the first time that Depardieu has been caught driving drunk. In 2013, a French court fined the actor 4 thousand euros for drunk driving and deprived him of the right to drive a vehicle for six months, according to BBC.

000000
Popular comments
Thoroughly pathetic report. No doubt based upon the israeli loyal author's hostility towards GD for his views on Russia. Driving a scooter is not the same as driving a car. When you crash, do you obliterate another vehicle, bring down a building? Of course not. One may hurt themselves riding a motor bike while buzzed, they are as likely as an ultra lite flyer of hurting others when they crash. Bin these zionazis, Sputnik. Get editors/writers not aligned with the enemies of Russia.
vot tak
31 August 2020, 03:10 GMT
000000
VoVo, LOL and LOL. Read the article first before commenting, to quote: "Depardieu, who has Russian citizenship as well as French, said at the police station that he no longer wants to be French and prefers Russia, and its president, Vladimir Putin, " Don't be a stick insect brain all your life. LOL
GeralltoGymru
31 August 2020, 08:21 GMT3
000000
Newsfeed
0
New firstOld first
loader
LIVE
Заголовок открываемого материала
Access to the chat has been blocked for violating the rules . You will be able to participate again through:∞. If you do not agree with the blocking, please use the feedback form
The discussion is closed. You can participate in the discussion within 24 hours after the publication of the article.
To participate in the discussion
log in or register
loader
Chats
Заголовок открываемого материала
Worldwide
InternationalEnglishEnglishMundoEspañolSpanish
Europe
DeutschlandDeutschGermanFranceFrançaisFrenchΕλλάδαΕλληνικάGreekItaliaItalianoItalianČeská republikaČeštinaCzechPolskaPolskiPolishСрбиjаСрпскиSerbianLatvijaLatviešuLatvianLietuvaLietuviųLithuanianMoldovaMoldoveneascăMoldavianБеларусьБеларускiBelarusian
Transcaucasia
ԱրմենիաՀայերենArmenianАҧсныАҧсышәалаAbkhazХуссар ИрыстонИронауОssetianსაქართველოქართულიGeorgianAzərbaycanАzərbaycancaAzerbaijani
Middle East
Sputnik عربيArabicArabicTürkiyeTürkçeTurkishSputnik ایرانPersianPersianSputnik افغانستانDariDari
Central Asia
ҚазақстанҚазақ тіліKazakhКыргызстанКыргызчаKyrgyzOʻzbekistonЎзбекчаUzbekТоҷикистонТоҷикӣTajik
East & Southeast Asia
Việt NamTiếng ViệtVietnamese日本日本語Japanese中国中文Chinese
South America
BrasilPortuguêsPortuguese
NewsfeedBreaking
04:33 GMTHouse GOP Threaten 'Disastrous Consequences' if US Removes Troops Before DPRK Denuclearises - Report
03:29 GMTNot That They Were Expected in the First Place
03:21 GMTUS Senate Rejects Resolution to Block $650Mln in Arms Sales to Saudi Arabia
03:09 GMTCharlottesville to Move Statue of Gen. Lee to Museum to Be Melted Into New Monument
03:03 GMTUS House Passes $768Bln Defense Spending Bill, Sends to Senate for Vote
02:45 GMTEx-Playboy Star Holly Madison Claims Hefner Was Abusive, 'Screaming' at Her for Cutting Hair Short
02:32 GMTUS Senate Confirms Biden Border Agency Chief Amid Immigration Crisis
02:13 GMTQueen, Her Corgis Could Be Attacked By Wolves & Bears if Royal Estates Rewilded, Tory Peer Says
00:59 GMTSmollett Becomes Aggressive During Trial When Cornered by Texts With Alleged Attacker - Report
00:45 GMTOmarova Backs Out of Biden Comptroller Nomination After GOP Attacks Claiming She’s a Communist
00:38 GMTPope Francis Compares EU’s Offer to Remove ‘Christmas’ For Inclusiveness With Fascist Rule
00:09 GMTWatch: South Korea Unveils Model for Hypersonic Weapon Prototype Days After US Blasted China’s Tests
YesterdayPutin-Biden Call: Key Points Discussed by US, Russian Presidents During Video Meeting
YesterdayWall Street Rallies Second Day in Row as Omicron Fears Fade, Tech Stocks up 3%
YesterdayUS Certifies Black Hawk Helicopter Model for Civilian Use
YesterdayPentagon Confirms Presence of US Forces in Ukraine, Declines to Disclose Number
YesterdayAmericans, Russians Dislike Each Other's Leadership - Polls
YesterdayUS House Capitol Assault Panel Threatens to Hold Ex-Trump Chief-of-Staff in Contempt
YesterdayCome to Daddy: Court Rules Australian Man Has Right to Over $50Bln in Bitcoin Stash
YesterdayCarjackers Make Use of Apple's Tracking Gadget, Police Say