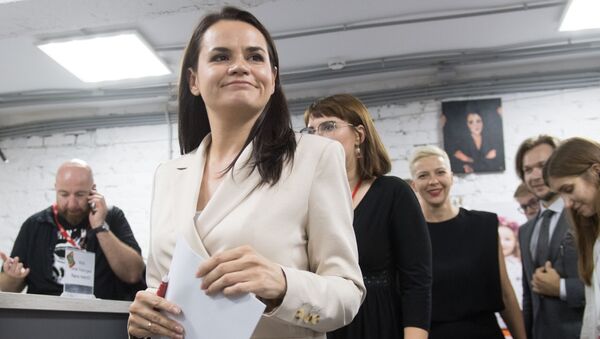 Ilya Tsukanov
All materialsWrite to the author
Belarus was engulfed in a wave of street protests and clashes between police and demonstrators after holding presidential elections on August 9, with forces opposing President Alexander Lukashenko accusing him of falsifying the results, and demanding a ‘peaceful handover of power’.

Belarusian state television has publicized what it says is the platform of the united opposition, with the document, the authenticity of which has yet to be independently verified, said to include elements which would dramatically weaken Belarus's relationship with Russia and move Minsk toward closer relations with the West and NATO.

The program, dubbed the ‘Emergency Package of Reforms for Belarus’, is said to have been approved by the main opposition candidate, Svetlana Tikhanovskaya, during the election campaign. According to Belarus 1 TV, the document was recently pulled offline, but remains accessible in Google’s cache.

The program purportedly proposes abolishing the Union State with Russia and erecting a proper border with the country, leaving the Eurasian Union, and withdrawing Belarus from the Collective Security Treaty Organization military alliance, which in addition to Russia and Belarus includes Armenia, Kazakhstan, Kyrgyzstan, and Tajikistan. It also seeks to close Russian military bases in Belarus and dissolve the Russian-Belarusian joint air defence system. 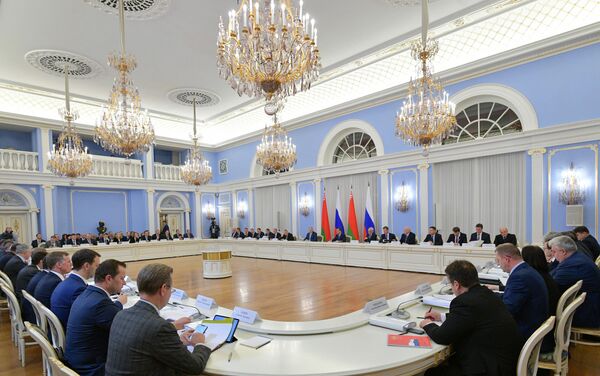 Meeting of the Council of Ministers of the Union State of Russia and Belarus, November 2019.
© Sputnik / Александр Астафьев
/
Go to the photo bank

Other proposals are said to include cutting off access to Russian television channels while mandating the broadcast of Latvian, Lithuanian and Polish and Ukrainian channels, introducing Belarusian-only lessons in schools and universities, banning ‘pro-Russian’ organizations, and introducing legal responsibility for ‘crimes against Belarusianness,’ including anyone questioning the existence of the Belarusian nation, state and language.

Political observer Oleg Romanov, who studied the document in detail for Belarus 1, told the TV channel that the radical geopolitical and military transformation it proposes threatens to have disastrous consequences for Belarus. He added that the scrapping of economic ties with Russia alone would end the $35 billion-a-year trade relationship between the two countries. 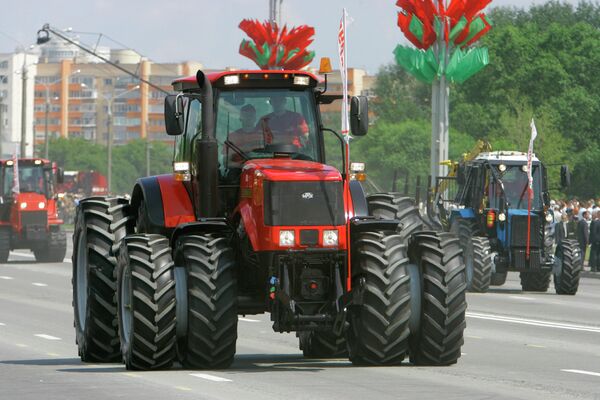 Other elements of the ‘Emergency Package’ also reportedly include ‘decommunization’ and ‘desovietization’, the return of pre-1995 flag and coat of arms, training of Belarusian servicemen under NATO standards and at alliance training centers, widespread privatization of industry and agriculture, the introduction of restrictions for Russian companies when it comes to ownership of Belarusian infrastructure, a reduction in the size and power of the bureaucracy, an ‘optimization’ the country’s health care system and a reduction in the number of hospital beds, the creation of a competitive market in housing and utilities, and the transfer of all hotels, waste processing, street maintenance and funeral services to the private sector.

Live Updates: Belarusian Interior Ministry Says Shares Responsibility for Recent Negative Events
Belarusian President Alexander Lukashenko commented on the ‘Emergency Package’ on Tuesday during a meeting of the Belarusian Security Council, pointing to its pro-NATO, pro-European Union content and suggesting that as with Ukraine, “no one is waiting” for Belarus in the alliance or the bloc.

The Belarusian president recalled that ‘democracy’ was installed in Ukraine “perhaps about ten years ago,” but that neither NATO nor Brussels have rushed to embrace Kiev. According to Lukashenko, an attempt to carry out the strategic proposals of the ‘Emergency Package’ program would “simply destroy our country.”

Lukashenko also commented on the program’s plans to close down Russian military bases, saying he did not understand the opposition’s antagonism toward them. “I don’t understand how these military bases threaten us. 90 percent of the people working there are Belarusians, and they receive the correspondent wages,” he said. 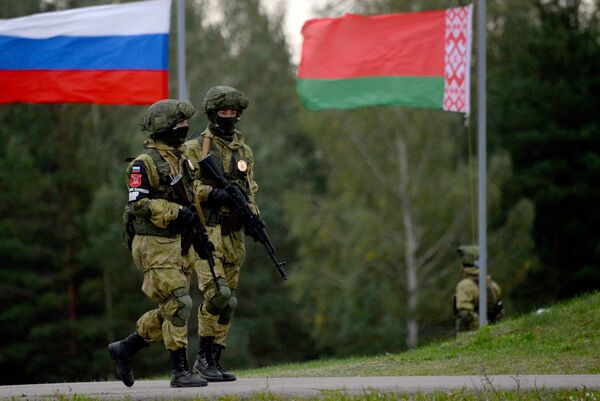 As for the program’s plan to withdraw Belarus from its military alliance with Russia, Lukashenko warned that doing so would quickly degrade the country’s military potential. “It needs to be understood that the danger is that we have Soviet, Russian weapons. If we withdraw from the CSTO, and with such an anti-Russian line to boot, these weapons will turn into scrap in the course of a year,” he suggested.

The Belarusian opposition has not commented on the authenticity of the ‘Emergency Package’ document, and whether opposition leader Svetlana Tikhanovskaya supports its proposals, but did release a statement Tuesday saying that they would remain “constructively disposed” toward all of Belarus’s foreign partners, including Russia, and consider that “all existing agreements must be respected” if they came to power.

Maria Kolesnikova, a member of the opposition’s ‘Coordination Council’ on the transition of power, said the opposition has “a desire and readiness to build mutually beneficial relations with all partner countries, including the Russian Federation.”

Belarus descended into over a week of mass protests and clashes after the August 9 presidential election in which Lukashenko received over 80 percent of the vote. The opposition, united around candidate Svetlana Tikhanovskaya, who received ten percent, dismissed the results and accused the president of rigging the election.

Protests began in cities across the country on election night as opposition supporters spilled into the streets, with security forces deployed to disperse the demonstrators. Since then, over 200 protesters have been injured and 2 killed, with about 6,700 people detained. At least 103 police officers have also suffered injuries, with 28 taken to hospital and ten run down by motorists. 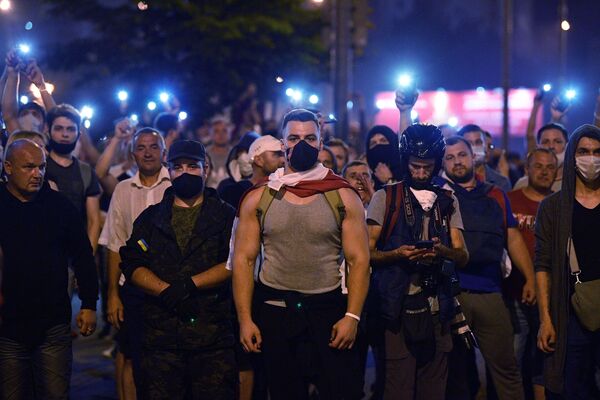 On Monday, after meeting with workers at a truck factory in Minsk, Lukashenko promised that new elections would be held, but only after a new constitution was adopted following a referendum. He warned, however, that he would not be forced to step down from power under pressure from the street. He also said that he would be prepared to allow the opposition to recount the votes. However, the opposition denied that such an offer had been made.

On Tuesday, Belarusian opposition politician Andrey Dmitriev said that he had held talks with US and EU diplomats, adding that it was necessary for the West to "issue a declaration on the commitment to and support for Belarus' independence." Also on Tuesday, NATO Secretary General Jens Stoltenberg said that he had expressed the alliance's support for "a sovereign and independent" Belarus in a phone call with Polish President Andrzej Duda.

Lukashenko had previously accused Poland, the Baltic States and the Czech Republic of helping to coordinate the protests. Tikhanovskaya fled to Lithuania last Tuesday, and has been making political demands to Minsk and Lukashenko from that country ever since.