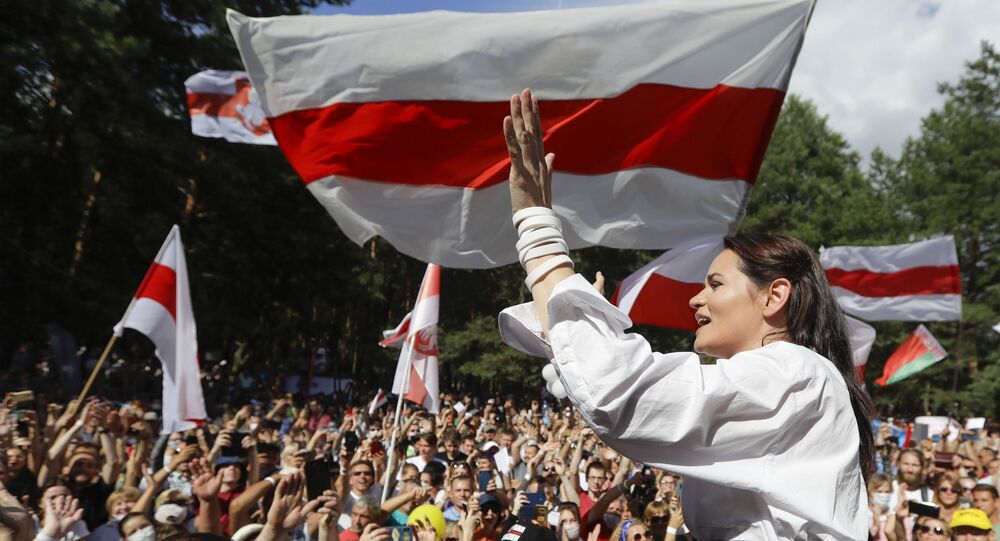 What’s With the Flag? The Sordid Past of Banner Flown by Belarusian Activists

Belarus has been ruled since 1994 by Alexander Lukashenko, whose re-election as President at the weekend with 80 percent of the vote has been derided as rigged by opposition activists. But why are the opposition flying a distinctive white, red and white flag?

Supporters of the main opposition candidate Svetlana Tikhanovskaya - who has fled to Lithuania - are still protesting about the result of the weekend’s presidential election.

The European Union’s foreign policy chief Josep Borrell has said EU foreign ministers will hold an extraordinary meeting on Friday, 14 August, to discuss the situation in Belarus as well as the aftermath of the Beirut blast.

1/ Across Minsk and Belarus supporters of the opposition are hanging up and waving white-red-white flags – very different to the official state flag, which is red and green.
Why does #Belarus have TWO flags?

​The Belarusian Health Ministry said 51 people had been taken to hospital with injuries sustained during clashes between opposition activists and police in the capital, Minsk on Tuesday night.

But why are Ms Tikhanovskaya’s supporters clad in white and flying a banner which is not the national flag?

The three horizontal stripes of white, red and white were briefly the national flag of Belarus between the country’s independence from the Soviet Union in 1991 and 1995.

In 1995 President Lukashenko organised a referendum and three-quarters of Belarusians voted to change it back to the red and green banner almost indistiguishable from the flag used by the Byelorussian Soviet Socialist Republic.

I am just reminding everyone that this, here, is the real Belarusian flag, and its designs reflect the culture of the Belorussians. It was adopted in 1951. The white-red-white flag was made in the 1910s, and was used by nationalists, including Nazi collaborators in WWII. #Belarus pic.twitter.com/M4wewbjVeV

​Belarus is a country the size of England and Scotland combined but with a population of less than 10 million.

Prior to the Soviet Union it was part of the Russian Empire under the Tsars but the people are ethnically and linguistically distinct and their desire for autonomy from Moscow has in the past been exploited.

At the end of the First World War when the Soviet leaders signed the Treaty of Brest-Litovsk - which is now the city of Brest in Belarus - a Belarusian People's Republic was created and it used the white-red-white flag.

The republic was recognised by Estonia and Finland but it was short-lived.

In December 1918 the Germany army pulled out of Belarus and the republic’s Prime Minister, Anton Luckiewich, moved to Grodno in Lithuania.

Luckiewich met with General Kolchak, one of the leaders of the White Russian forces, in 1919 but when the Red Army defeated the Whites the Soviet Union swallowed up Belarus.

The white-red-and white flag was also used between 1942 and 1944 in Nazi-occupied Belarus and it was worn on the patches of Belarusian volunteers in the Wehrmacht and the Waffen SS.

In March 1945 the majority of those Belarusian soldiers surrendered to the US Army in Bavaria and many ended up emigrating to the United States, rather than returning to the Soviet Union.

The historical origin of the flag - sometimes accompanied by a mounted knight known as a pahonya - are unknown but it is believed it may date from 1410 when the united armies of Poland and the Grand Duchy of Lithuania defeated the Teutonic Order of German knights at the Battle of Grunwald.

Legend has it that a wounded Belarusian knight raised a blood-soaked bandage as a banner at the end of the battle.