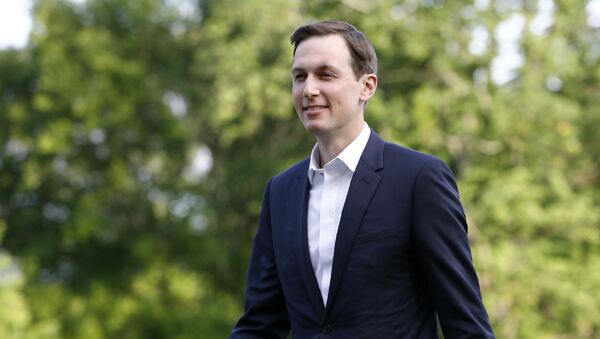 Jared Kushner, son-in-law and senior adviser to US President Donald Trump, met with Birthday Party nominee Kanye West over the weekend to discuss the details of a book on the empowerment of Black Americans, according to the rapper.

Citing “individuals familiar with the meeting,” the New York Times reported on Wednesday that West and Kushner met in Colorado while the senior adviser was traveling with his wife and co-worker, Ivanka Trump.

West, who was reportedly camping in Colorado, flew to the small town of Telluride to conduct his meeting with Kushner.

No details about their discussion were provided by the Times.

Before unleashing a series of tweets Wednesday about his upcoming fashion “prototypes,” including a line of “waterproof bags,” West revealed on Tuesday that he would be open to a live interview with the New York Times.

He noted that the interview would address his meeting with Kushner, as well as their discussion of Dr. Claud Anderson’s 2001 book “PowerNomics: The National Plan to Empower Black America.”

Within the book, Anderson lays out a five-year plan for Black America to become a “prosperous and empowered race that is self-sufficient and competitive as a group,” according to its Amazon synopsis. The author encourages Black Americans to “take strategic steps to create a new reality for their race.”

TMZ reported on Monday that West believes Democrats hired a private investigator to track his campaign’s signature-gathering team in Wisconsin as part of an "organized effort of harassment and intimidation.”

A few days prior to the tabloid’s report, West conducted another interview with Forbes, in which he asserted that “Trump is the closest president we’ve had in years to allowing God to still be part of the conversation.”

When pressed on whether he is running a spoiler campaign against former Vice President and Democratic presidential nominee Joe Biden, West provided at least two different responses.

"I'm not going to argue with you. Jesus is King,” he first said, mentioning the title of his 2019 studio album. However, when pressed on the topic later in the interview, he said, “I’m not denying it; I just told you.”

West’s rushed and late campaign has not only been hindered by alleged spying and his own tardiness, but also his own wife, Kim Kardashian West.

The reality star took to social media last month to speak on her husband’s bipolar disorder, asserting that “the family is powerless” when it comes to West’s actions. Many took this to be her attempt at distancing her own brand from her partner ahead of a possible divorce.