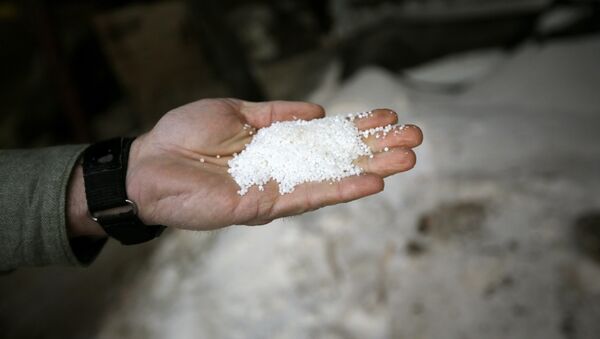 Chris Summers
All materialsWrite to the author
A huge explosion near the docks in the Lebanese capital, Beirut, has killed more than 100 people and injured thousands. But what was the substance that exploded and why is it so dangerous?

Lebanon's Prime Minister, Hassan Diab, has blamed the devastating explosion in the port of Beirut on Tuesday, 4 August, on a huge stockpile of ammonium nitrate.

He said 2,700 tonnes of the substance had been left in a warehouse for six years after being unloaded from a ship in 2013.

A video showing the before and after of Beirut's main port after Yesterday's explosion, using drone imagery from today, shared by @Dalatrm.

The crater is submerged to a diameter of 140m. pic.twitter.com/0xluycFK5U

​The governor of Beirut, Marwan Aboud, said on Wednesday the blast had left up to 300,000 homeless and caused an estimated US$3 billion across the city.

JUST IN: Lebanese sources report that the welding of a door caused sparks which ignited 2,700 tonnes of ammonium nitrate, which caused explosion at Beirut Port earlier today.

​Ammonium nitrate is an industrial chemical which is used mainly as an agricultural fertiliser.

It is a good source of nitrogen for plants but in the right (or wrong) circumstances it is also highly explosive, as has been seen in the numerous terrifying videos of the Beirut blast which have gone viral.

In recent years, it has become a popular component for car bombs, IEDs and other explosive devices used by jihadists and other terror groups. 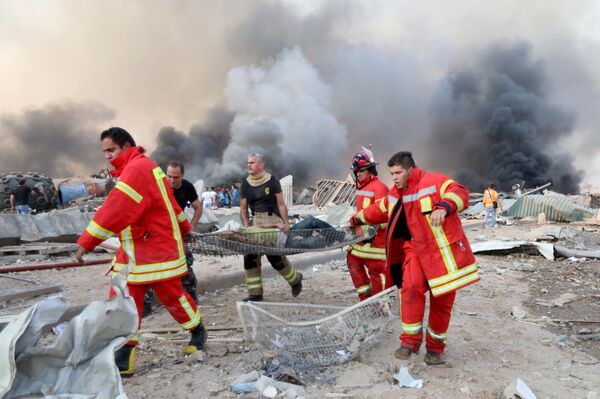 In 2007, five men were jailed for life in London for plotting to blow up several venues in Britain with bombs made from ammonium nitrate.

The trial - known as Operation Crevice - heard the group had bought 600 kilograms of ammonium nitrate from an agricultural merchants in Sussex and kept it at a self-storage unit in Hanwell, west London.

My deepest condolences to families of victims of the horrific explosions in Beirut, and to the people & Government of Lebanon.
I wish all injured, including United Nations personnel, a speedy recovery.
The @UN remains committed to supporting Lebanon at this difficult time.

​A co-conspirator in the United States was designing a remote-control detonator and the gang - who sympathised with al-Qaeda* and had spent time in terrorist training camps in Pakistan - had discussed various targets, including the Bluewater shopping centre in Kent and the Ministry of Sound nightclub in south London.

Professor Alan Hatcher, who spent 20 years as a bomb disposal expert with the British armed forces, told the BBC: "If they had got it right it would have been catastrophic.”

Ammonium nitrate was the weapon of choice of the Provisional IRA in the 1970s and 80s and in 1995 Timothy McVeigh parked a truck bomb containing 2,200 kilograms of ammonium nitrate and fuel oil under a federal government building in Oklahoma City, killing 168 people, including 19 children.

deepest condolences to the people who have lost family/loved ones. sending our prayers of healing, safety and protection to the people of Beirut, Lebanon. any act of help, big or small is still a help, it will be truly appreciated 🙏
#PrayForLebanon pic.twitter.com/6WomxS4aDe

​So why is it so dangerous?

On its own ammonium nitrate is not explosive and Gabriel da Silva, a senior lecturer in chemical engineering at the University of Melbourne told The Guardian: "You need extreme circumstances to set off an explosion."

He said if it becomes contaminated with oil or other chemicals it becomes extremely volatile and can explode with devastating consequences, as appears to have happened in Beirut.

The Agricultural Industries Confederation says: "Ammonium nitrate is safe when correctly handled and stored, it is not in itself combustible. It is an oxidising agent, it can assist other materials to burn, even if air is excluded."

"Ammonium nitrate will not explode due to the friction and impact found in normal handling, but it can be detonated under heat and confinement or by a severe shock. For example, in a fire, pools of molten ammonium nitrate may be formed and if the molten mass becomes confined (in drains, pipes, plant or machinery) it could explode, particularly if it becomes contaminated", the AIC explains. 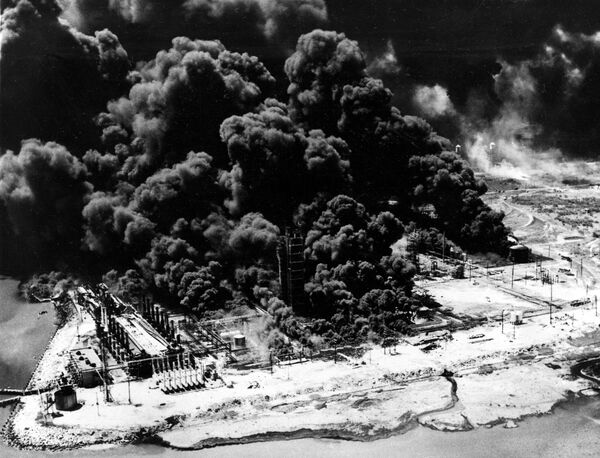 Thick columns of black smoke are rising from the fiercely burning Monsanto Chemical Company, after the explosion of a cargo ship docked nearby at the harbor of Texas City, Texas, on April 16, 1947.
© AP Photo / Anonymous

Britain’s Health and Safety Executive provides detailed guidelines about how ammonium nitrate should be stored and the National Counter Terrorism Security Office has a Secure Your Fertiliser website in which it warns of the dangers of it being stolen.

It advises agricultural merchants to keep ammonium nitrate fertiliser "in a secure area such as a building or sheeted away from public view" and tells farmers to "avoid leaving fertiliser in a field overnight - never leave fertiliser in field for a long period of time."

It is also illegal to sell ammonium nitrate without the correct documentation but there are websites which explain how to make it yourself.

The aftermath of an ammonium nitrate explosion is also hazardous - in 1947 rescue crews tried to extinguish flames after the Texas City disaster but the water inadvertently made things worse and among the dead were many firefighters.