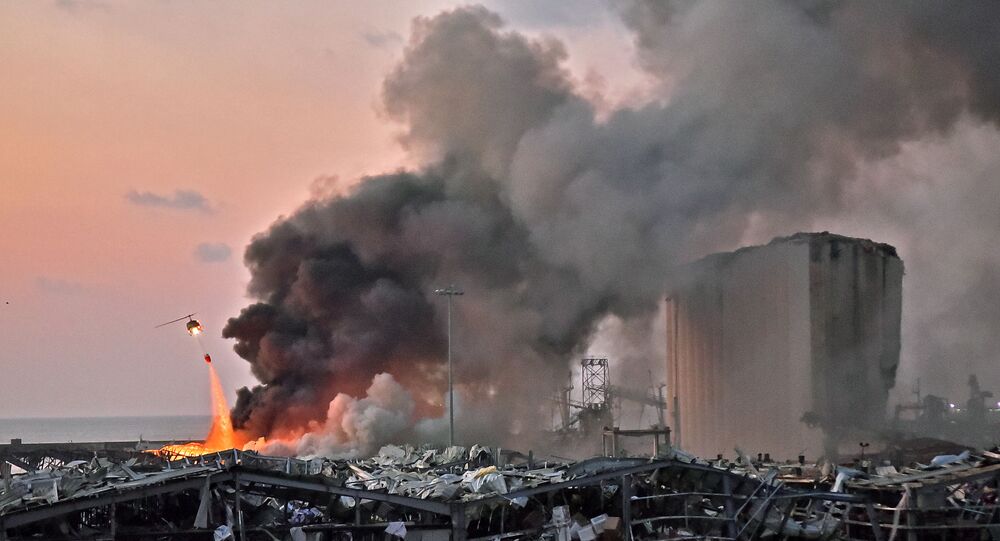 A batch of ammonium nitrate weighing 2,750 tonnes exploded in the port of Beirut on Tuesday, leaving over 70 dead and more than 4,000 injured, according to preliminary data.

As a result of the Beirut port blast, half of the city's buildings were damaged, and hospitals were overcrowded due to a large number of those injured, Beirut's governor said.

According to the Lebanese prime minister, the ammonium nitrate that exploded on Tuesday had been stored in a depot for 6 years without proper precautions.

The chemical, also known as NH4-NO3, is a highly explosive compound used in agricultural fertilisers and also in dynamite. An explosion occurs when ammonium nitrate gets in contact with an open fire, or because of shock to detonation transition. If the chemical is stored in large amounts, an explosion could lead to a major disaster with multiple casualties.

Explosion at Warehouse in China's Tianjin in 2015

Two major blasts occurred at industrial warehouses in the port city of Tianjin, followed by a fire on 12 August 2015. They left 110 emergency personnel and 55 residents and employees dead, more than 790 people injured, and eight bodies have not been found.

According to the authorities, the blasts were triggered by flammable goods stored alongside hazardous chemicals, including ammonium nitrate and sodium cyanide.

The accident resulted in tens of thousands of people displaced, causing an estimated $1.5 billion in damage. The release of toxic chemicals into the air led to widespread eradication of marine life near the explosion site.

At least 162 people died and more than 3,000 were injured as a result of the explosion. The blast wave damaged nearby buildings, leaving thousands homeless.

© AFP 2020 / AFP
This handout photo by the World Food Programme taken 24 April 2004 and received 25 April 2004 shows a destroyed building left from the 22 April explosion at a railway station in Ryongchon, 20 kms from the Chinese border.

Back in 2004, media speculated that the Ryongchon explosion was an "assassination plot" targeting the country's then-leader Kim Jong-il, whose train was supposed to pass the station on that day.

The Texas City Disaster in 1947

The deadliest industrial accident in the history of the US occurred at Galveston Bay in the Port of Texas City on 16 April 1947. It started after someone failed to toss a cigarette aboard the French-registered vessel SS Grandcamp, which carried about 2,300 tons of ammonium nitrate.

The blast at Grandcamp triggered a chain reaction on other ships docked in the port and on nearby oil refineries, resulting in at least 581 people dead and roughly 3,500 injured.

The explosion also hit two planes in the sky above and could have possibly knocked down people in Galveston, 16 kilometres (10 miles) away.

© AP Photo / Anonymous
Thick columns of black smoke are rising from the fiercely burning Monsanto Chemical Company, after the explosion of a cargo ship docked nearby at the harbor of Texas City, Texas, on April 16, 1947.

On 21 September 1921, a tower silo that stored about 450 tons of ammonium sulfate and ammonium nitrate fertiliser exploded at a BASF plant in Oppau, killing an estimated 500 to 600 people and injuring roughly 2,000 others.

The blast was felt miles away, reaching Frankfurt, and leaving a crater at the site of the explosion.

Prior to the 1921 explosion, the plant had successfully used a 50:50 mixture of ammonium sulfate and ammonium nitrate over 20,000 times, but on the day of the blast, the needed proportion was apparently distorted.

The Great Kent Explosion in 1916

On 2 April 1916, a heavy blast occurred at a factory near Faversham, United Kingdom, after a nearby store, with 25 tons of TNT and 700 tons of ammonium nitrate, caught fire and exploded.

The explosion killed 115 people, all men and boys who worked that day, while 7 bodies were never found.

The blast was felt in Norwich, about 244 kilometres (152 miles) away from Faversham.