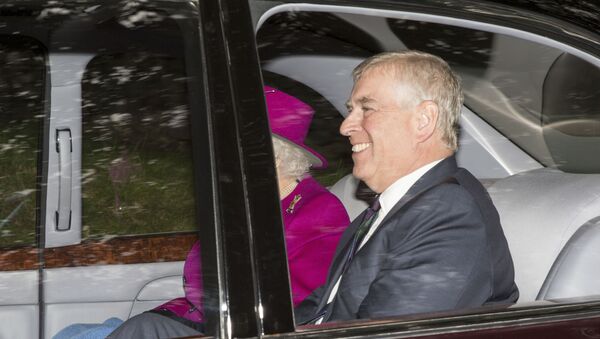 © AP Photo / Robert Perry
Subscribe
Max Gorbachev
All materialsWrite to the author
Virginia Roberts (now Virginia Giuffre) for years has claimed that Jeffrey Epstein and his companion Ghislaine Maxwell trafficked her to London when she was 17, where she was forced to have sex with Prince Andrew, a claim the Duke of York and the Royal Family categorically deny.

Jeffrey Epstein's alleged sex slave Virginia Giuffre has revealed how difficult it was to satisfy the sexual desires of Prince Andrew, who Giuffre claims to have had sex with on at least three occasions, the Daily Mail reported. The revelations are part of a manuscript, where the woman detailed alleged sexual abuse at the hands of Jeffrey Epstein and his circle of powerful friends, which included presidents, prime ministers, royals, and celebrities.

In the papers, Giuffre spoke about how in 2001 she was sent alone to Epstein’s 10,000 acres ranch Zorro to “entertain” the billionaire’s friend, who turned out to be the Duke of York.

The woman claims she and the Duke of York were the only people at the ranch with the exception of several bodyguards and maids that were hardly seen. Giuffre claims it was not easy to satisfy the sexual desires of Epstein’s friends, including the Duke of York.

"He loved my feet and even licked in between my toes. There was the lack of passion in the intimacy we shared, to him I was just another girl, and to me, he was just another job", Giuffre wrote. After purportedly pleasuring the royal for two days, Giuffre claims she returned to Epstein and Maxwell, who asked her about the trip.

- "How was the ranch with the Prince?", Maxwell said, as cited by Giuffre.

- "I took him horseback riding, nowhere too far around the property, um … we went swimming in the pool, and of course I gave him plenty of massages. He had a massage at least a couple times each day, really seeming to enjoy his time there", Giuffre told Epstein according to the manuscript.

Giuffre, who is now mother of three children, wrote that both Epstein and Maxwell were pleased with her answer. "Like two proud parents they both looked over me with such content. 'Good, you did really well', Jeffrey complimented me”, Giuffre said, adding that Epstein paid her almost $1,000 for the two days she allegedly spent with the royal.

Giuffre’s manuscript was released last week as part of an ongoing lawsuit against Epstein’s former girlfriend and companion Ghislaine Maxwell. The 58-year-old socialite was arrested by the FBI at the beginning of July and is facing six charges, including of enticing minors – one as young as 14 – to engage in illegal sex acts. Epstein’s alleged victims have long claimed Maxwell played a key role in the sex trafficking ring of minors the billionaire established, grooming young girls and women. Epstein himself died in 2019 by purportedly hanging himself in a prison cell before his trial began.

Other court documents released last week claim that Prince Andrew allegedly helped Epstein during his first criminal case and reportedly asked prosecutors to give the billionaire a more favourable plea deal. After the arrest and death of Epstein in 2019, the Duke of York faced enormous pressure from the public. In an interview with the BBC, he categorically denied allegations that he had sex with Giuffre, saying he has an alibi and said he has no recollection of meeting the woman, despite the existence of a photo showing the royal standing with Giuffre. The royal previously voiced his desire to help investigators working on Epstein the case, however prosecutors accused the prince of providing zero cooperation and even of stonewalling the investigation.

000000
Popular comments
Perhaps some of the bodyguards in that mansion may like to testify against randy Prince Andrew.

landauroj
3 August 2020, 14:15 GMT6
000000
Prince Andrew is being highlighted for publicity . What about all the other rich celebrity men Virginia Roberts Giuffre slept with , shouldn't they be named as well ? Even if Andrew did have sex with her no crime was committed . If Andrew was so difficult to please sexually , why entertain him 3 times ? Casual sexual relationships are not personal , intimate and loving , no doubt Virginia herself was cool . This case and others similar are not really about abuse and hurt feelings , they are about money , trying to get a big slice of Epstein's money .