Could US and Western Europe Use Hagia Sophia Conversion to Create a New Front Against Turkey? 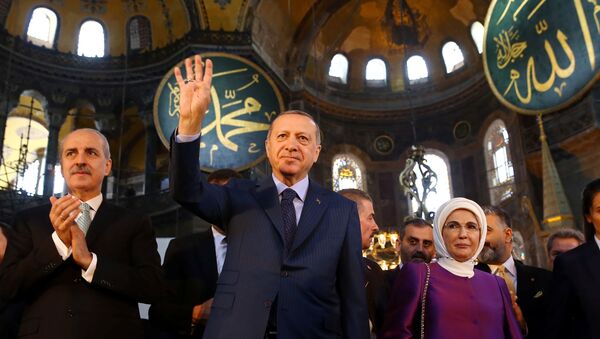 On 10 July, President Recep Tayyip Erdogan ordered the conversion of Hagia Sophia into a mosque, after a Turkish court ruled that the site's secularisation was unlawful. Following an outcry over the site's status change Turkish observers have weighed up the possible political consequences of Ankara's decision both domestically and internationally.

Consecrated as a Christian cathedral in 537, Hagia Sophia ("Holy Wisdom") was turned into a Muslim house of worship after the Ottoman conquest of Constantinople in 1453. However, nearly 500 years later, Mustafa Kemal Ataturk, the founder and first president of the Turkish Republic, transformed it into a museum as a good-will gesture. In 1985 it was chosen as a world heritage site by UNESCO.

In the aftermath of Erdogan's ruling, UNESCO, the Vatican, and the Russian and Greek Orthodox Churches have expressed deep regret over the decision. The European Union's foreign policy chief Josep Borrell denounced Turkey's ruling as "regrettable" while EU foreign ministers declared that they "condemn" the decision on Monday. The US State Department made it clear that it was "disappointed" by the conversion. Earlier, Secretary of State Mike Pompeo warned Ankara against converting the historic site into a mosque.

West May Use the Precedent to Target Turkey

The international debate over the conversion of Hagia Sophia has only begun, remarks political analyst Onur Erim, foreseeing long-term consequences for the move.

In addition to possible straining of Turkey's relations with Russia and Greece, Ankara may also face a backlash from the Western powers, he believes.

"The decision will result in a chance for countries, especially Western ones, which didn’t have any friendly feelings for Turkey, as well as groups with similar opinions there to create a new front against Turkey", he warns. "I believe that Western Europe, the US and even the Evangelists there will be involved in this".

Arguing that the Ottoman Empire largely preserved the original frescoes and images in the former cathedral, the political analyst notes that the debate could open up a Pandora's Box: "The cultural heritage of Europe and the Balkans, mainly Greece and Spain, knows many cases of destruction", he says. "Much has been done wrong, including turning religious shrines into exhibition venues. And Turkey, including the Ottoman period Turkey, is quite innocent in this matter".

On 13 July, Recep Tayyip Erdogan and Vladimir Putin discussed the conversion of Hagia Sophia into a mosque among other issues during a phone conversation. The Turkish president assured his Russian counterpart that relics sacred to Christians would be preserved while access to the unique monument would be guaranteed for all wishing to visit it, including foreign nationals. 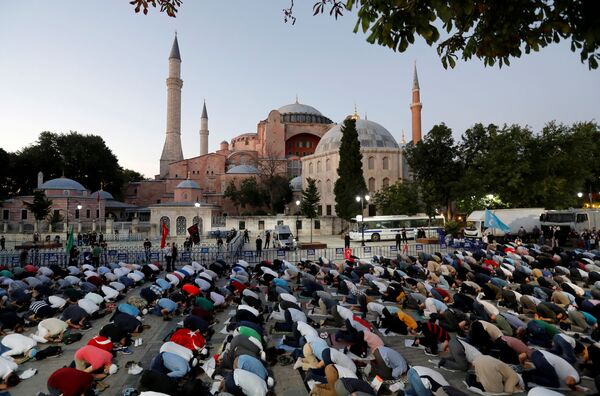 Turning Hagia Sophia Into Mosque is a Political Issue

"We are forced to say that we are faced with a completely internal political issue. This is not a matter of religion, but of politics, and even publicity", says Mehmet Hayri Kirbasoglu, professor at the Department of Theology of Ankara University. "The work carried out, consultations and drafting of this decision are quite evident here. However, there haven’t been any forecasts regarding short- and long-term consequences of this".

Erdogan first hinted at the possibility of transforming the former Byzantine-era cathedral into a mosque in March 2019, ahead of the municipal elections. A day later, at a Justice and Development Party (AKP) rally in Istanbul the Turkish president pledged to return Hagia Sophia "to its original state and call it a mosque" as a response to the US recognition of Israeli sovereignty over the Golan Heights and Jerusalem.

Erdogan's latest move came amid Israel's effort to incorporate Judea and Samaria in accordance with Donald Trump's "deal of the century" which was subjected to harsh criticism by Ankara for its supposed violation of Palestinian rights.

It's not about religion, it's manifestation of power, deems Kirbasoglu citing the 40th verse of Surah “The Pilgrimage” that "clearly says that one shouldn’t touch churches, monasteries, synagogues and shrines of other religions, since Allah’s name is remembered there".

Though Erdogan's move is likely to receive high praise from neo-Ottoman nationalists, the conversion of Hagia Sophia into a mosque is unlikely to solve Turkey's problems such as "corruption, unemployment, unequal distribution of income, polarization or hate mongering", the professor argues.

He adds that the site's museum status would be more acceptable from the perspective of world heritage. "There is no second Hagia Sophia. It has such a feature. It had been completed just 30 years before the Prophet was born,” Mehmet Kirbasoglu underscores.

Saying  that the site "is undoubtedly global heritage", Ali Özgündüz, Republican People’s Party (CHP) member, recollected that its reconversion into a mosque was an old dream of Turkey's Islamists. According to him, for 70-80 years there has been talk of "breaking chains around Hagia Sophia".

Citing mounting criticism from the international community including Turkey's NATO ally, the US, Özgündüz, rules out the imposition of any sanctions as a result of Erdogan's move, "since this decision is linked to Turkey’s right to sovereignty".