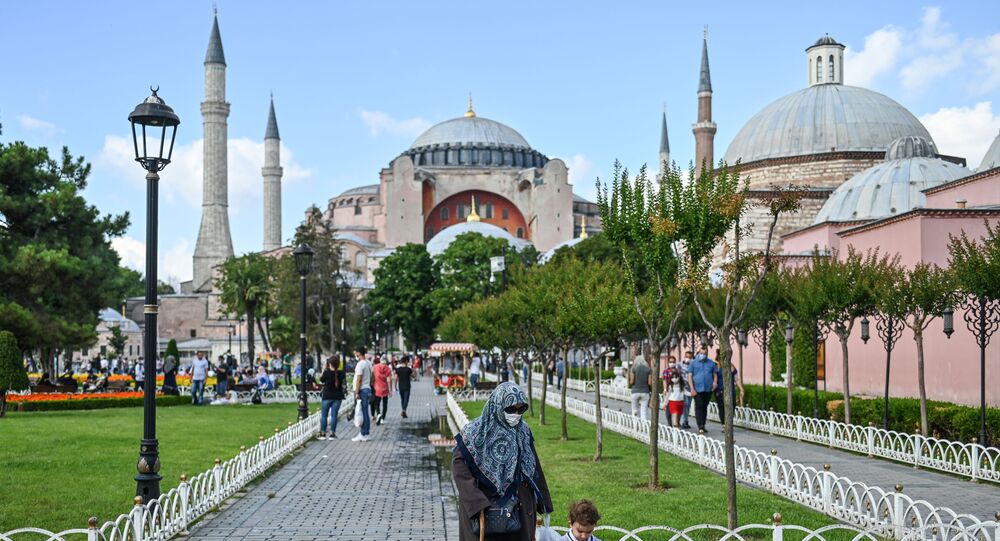 ANKARA (Sputnik) - Turkish authorities have fixed a historical mistake made in 1934 by turning Hagia Sophia from museum to a mosque, President Recep Tayyip Erdogan told reporters on Tuesday.

"We have fulfilled the will of 83 million of our citizens. In 1934, who turned it into a museum? And now we are correcting this mistake. This is our sovereign right," Erdogan said, specifying that Hagia Sophia was turned into a mosque from a museum, not from a church.

The president added that the Ottoman Empire took care of Hagia Sophia for centuries, and Turkey would continue preserving its cultural value.

Erdogan also said that Turkish authorities often conduct restoration works of churches and synagogues in the country, and mentioned that there are "four to five times more" religious buildings for non-muslims in Turkey than for Muslims in Europe.

Last week, Turkey's highest administrative court, the Council of State, annulled the decree converting Hagia Sophia into a museum, meaning it can now be used as a mosque. Erdogan has signed the decree.

The move was not particularly welcomed abroad. Austria, France, Greece, Cyprus, Russia and the United States were among the countries that expressed regrets over Ankara's decision. Turkey views the matter as its internal affair.

Hagia Sophia was founded by Byzantine Emperor Justinian as a cathedral and was opened on December 27, 537. The church, considered the epitome of Byzantine architecture, was the world's largest building for over a thousand years. After the capture of Constantinople by the Ottomans and the fall of the Byzantine Empire in 1453, the cathedral was converted into a mosque, but since 1934, the building, by a decree of the founder of the Republic of Turkey, Mustafa Kemal Ataturk, became a museum and was included in the UNESCO World Heritage List.