Independence Day Speeches: Is Trump Sowing Divisions in US by Decrying War Against History? 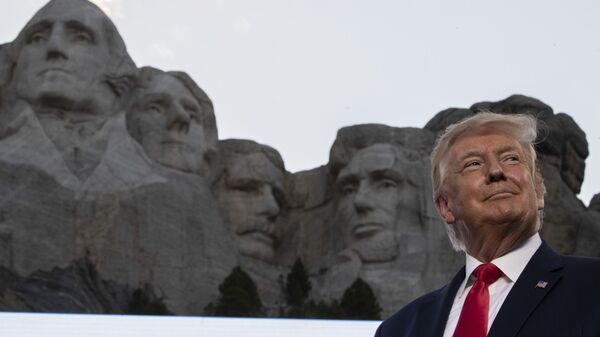 © AP Photo / Alex Brandon
Subscribe
International
India
Africa
Donald Trump's Mount Rushmore speech commemorating the 244th anniversary of US Independence was immediately branded by Yahoo News and The Washington Post as sowing and exploiting social divisions. US observers have discussed the president's address and the forces which are deepening the rift between different parts of the American society.

During his speech, Trump condemned a "left-wing cultural revolution" carried out by "far-left fascists" who are trying to tear down the statues of American Founders, deface the country's most sacred memorials, and unleash a wave of violent crime across the country.

CNN, Time Magazine, The New York Times and other mainstream media outlets have reacted harshly to the president's address, dubbing it "outrageous" and accusing Trump of pushing "racial division", "stoking fear among his base of white voters" and paying little attention to the dire consequences of the COVID pandemic. Democrats were even more categorical with Senator Tammy Duckworth saying that Trump's "priorities are all wrong" and the official Twitter page for the Democratic National Committee (DNC) stating on 30 June that the president's rally at Mount Rushmore on Independence Day would be "glorifying white supremacy". The latter statement was apparently too much even for the Democrats as it was very soon taken down.

'Trump's Speech Was Spot On'

Still, it wasn't Trump who started pushing racial and ethnic divisions among the Americans, according to US political commentator Mike Hoxard, who believes that the president "was on point with his comments", while the liberal media has largely sided with "the far left".

The statement came five days after Harold Frazier, the chairman of the Cheyenne River Sioux Tribe called for the removal of the memorial located on Sioux sacred land, offering to take down the carvings of four US presidents free of charge.

According to Mike Hoxard, the protest by Native Americans, who also blocked the road leading up to Mount Rushmore and faced off with the National Guard in the hours before the president's speech, was no coincidence and "is typical of the propaganda routinely utilised against Trump".

The defacing spree, denounced by Trump during his latest speech, came on the heels of the Black Lives Matter protests over the killing of George Floyd which saw many monuments honoring Confederate and "slave-owners" taken down. However, rioters did not limit themselves to desecrating statues of people somehow connected with the US "racist past": the memorial of Spanish writer Miguel de Cervantes, author of "Don Quixote", who spent most of his life in poverty and for several years was held captive as a slave, was also vandalized in San-Francisco.

To preserve the US cultural heritage Trump announced on 26 June that he had inked an executive order protecting memorials and combating criminal violence.

​On 3 July, the president issued an executive order on "Building and Rebuilding Monuments to American Heroes".

'Real Danger Will be After the Presidential Election'

Those who "take down statues", point out particular groups in our society "as being abused" and undermine the US' heritage and history "are people who do not want freedom for others", highlights Paul Taylor, a US political analyst.

Taylor does not agree with the US mainstream media that Trump is "exaggerating" the challenge posed to US values by nation-wide protests and "left-wing groups". According to the analyst this threat is quite real.

"In my opinion, anyone who is demonstrating against our country today has three things in common", he says. "They hate America, they hate the Constitution and they hate world peace along with all religions. Their preference is an immoral society gone amok!"

Meanwhile, as the polarisation and divisions are growing, the US media "makes the physical threat appear more dangerous than it actually is", echoes Mike Hoxard.

"Protests are few, relatively speaking in a country of 330 million", the political analyst says. "The real danger will be after the presidential election. Then we will see if all the talk of civil war will materialise, or if there is no action to back up their words. As for Democrats, they do not want resolutions to problems. They want their socialist agenda enacted at all costs".

The upcoming election will be a choice between the US and anarchy, opines Michael Shannon, a political commentator and Newsmax columnist. Judging from the president's speech, what he is trying to do is to unite people behind their shared history, Shannon believes.

The ongoing polarization and political fight fanned by the left-leaning media "is all about power". Trump's antagonists are hoping they can use this divisiveness, this "fake cry of systemic racism" to win the presidency, keep the House and to take over the Senate; at that point they will begin to change the US country in a direction "that most people wouldn't recognize and would not support", Shannon concludes.