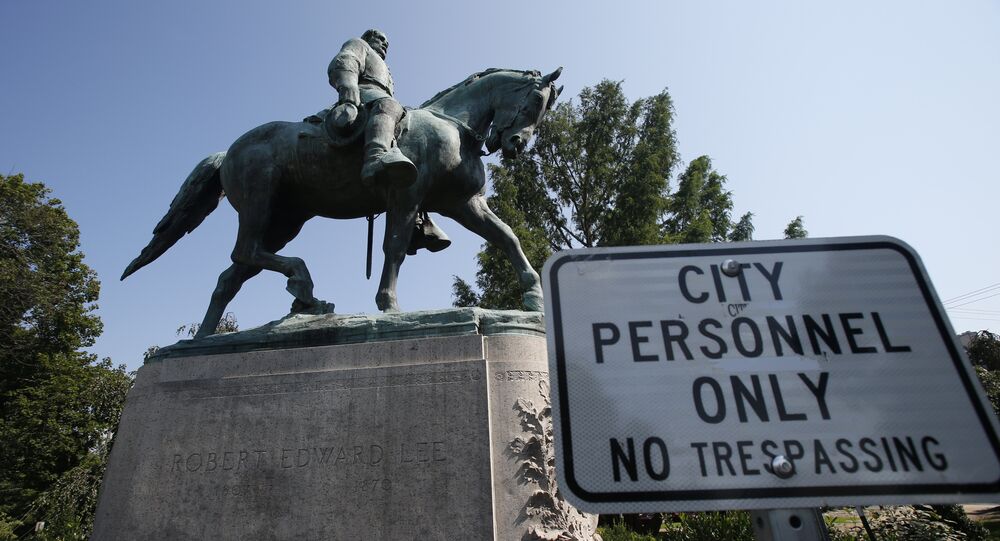 Removal of Confederate Monuments: Why Assault Against US History is Fraught With Risks

As an effort to remove Confederate statues and symbols is gaining pace, being supported by Democrats and some GOP senators, American observers have debated the ongoing war on historical monuments amid the nationwide Black Lives Matter protests and its potential consequences.

The Senate Armed Services Committee has adopted an amendment to the annual spending bill which would strip Confederate names from military bases and other Pentagon facilities within the next three years. Earlier this week, a US Army spokesperson stated that the Department of Defence is "open to a bipartisan discussion on the topic".

However, Donald Trump strongly rejected the idea on Wednesday, triggering the question of whether one should expect clashes between GOP lawmakers and the president over the latest amendment.

THOSE THAT DENY THEIR HISTORY ARE DOOMED TO REPEAT IT!

​The initiative comes amid the George Floyd protests, which have engulfed the nation since 26 May over the alleged killing of a 46-year old African-American by a white police officer during his arrest.

BLM protesters are continuing to vandalise and topple Confederate statues and symbols, saying that they are glorifying the era of slavery and the oppression of blacks in the US. Rioters granted Christopher Columbus statues no quarter either, beheading and throwing them down in Boston, Miami and Virginia.

Democrats supported the initiative, with House Speaker Pelosi calling for the removal of 11 statues representing Confederate leaders and soldiers from the US Civil War from the US Capitol. "Their statues pay homage to hate, not heritage. They must be removed," the speaker stated in a letter to US congressmen.

People really need to ask themselves why their communities chose to erect statues to slaveholders instead of abolitionists.

According to him, the US should "honestly confront" its history of slavery, which "has tainted and corrupted America's soul ever since".

"The documented murder of George Floyd by four Minneapolis police officers in broad daylight has laid bare the ugly reality of racist policing that has plagued the United States for more than 400 years since the advent of slavery in this country", he insists, suggesting that the Americans "must take advantage of this unique and extraordinary historical moment to make some deep structural changes in American life."

Graphic video: Watch the moment a toppled Confederate soldier statue falls on a rioter, injuring him severely. This happened tonight in Portsmouth, Va. All the statues around the monument were beheaded before this accident. #BlackLivesMatter pic.twitter.com/yv5j45Fd7j

​Thomas Mackaman, associate professor of History at King's College Wilkes-Barre, agrees with Kuznick: according to him, many of Confederate monuments were erected "during the era of Jim Crow segregation from the 1890s through the 1960s" "to justify the oppression of the Jim Crow era by romanticising the slave past and falsifying the purpose of the Southern Cause", an ideology presenting the Confederacy's viewpoint on the reasons behind the civil war.

Still, the professor expresses concerns that "the Democratic Party, which was the party of slavery and Jim Crow," is apparently seeking "to divert this movement with identity politics, and to take advantage of the justified anger against symbols of the Confederacy to attack the American Revolution and its great figures like Thomas Jefferson," the one who declared that "all men are created equal".

'Many Americans Don't Want to See Our History Erased'

For her part, Pamela Geller, a political activist, blogger and commentator cites obvious contradictions in the Dems' narrative.

"The Democrats say they want the Confederate statues removed because they depict slave-owners," she says. "While that is true, it is also true of some (not all) of the Founding Fathers, and most of the human race in all nations throughout history."

No, removing confederate statues won't solve the reality of racial inequality. Yes, it's just symbolic. But so are the statues themselves. Leaving them up sends a message, as does taking them down. The question is: which message is better?

​The political activist sees the Democrats-backed war on historical monuments as "part of the ongoing effort to make Americans ashamed of their past, as if there were something uniquely terrible in it, so as to weaken their resolve to defend our nation now".

One should bear in mind that "America fought a bloody and devastating civil war to end slavery, leaving over 600,000 dead, and has always had political leaders who fought for civil rights," something which is completely ignored by the proponents of removal of the statues, she points out.

"The Left is trying to make us all unaware of those facts and consumed with hatred for our own country," she opines, warning that the recent offensive against the US historical memory "will do nothing but deepen divisions" within the already-polarised American society.

"Many Americans don't want to see our history erased and will be angered at Democrats for demanding this and Republicans for playing along. It will set Americans who think we should be ashamed of our history against those who don't," the blogger foresees.

'Erasing the Past Dooms Those in the Present'

"To date, America's Civil War, remains a chapter, as with prior years, that deserves close study and careful review not by dogmatists, but by open-minded scholars," highlights Charles Ortel, a Wall Street analyst and investigative journalist. "Yes there were scoundrels and yes there were heroes on both sides of that bloody war."

He bemoans the fact that intolerant consideration of the past "has moulded too many minds, including too many 'thoughtleaders'". So, answering the question of what lay behind the Dems' recent attack on the history of the American Civil War, one would say that it's "ignorance", the analyst believes.

According to him, "the assault against history" in the US arguably took modern root around 1970, and has been continuing ever since, as leftist scholars have gradually taken over many institutions of learning and woven together narratives, now considered "mainstream", that concentrates upon failures of previous American generations.

"Erasing the past dooms those in the present and future to make the same or worse mistakes than our ancestors made," Ortel points out. "Doing so is actually juvenile and ignorant. Destroying historical monuments closes out the possibility to gain deeper understanding of how our ancestors thought in their time. If they venerated evil, let the monuments stand as a warning that evil is sly and seductive, and that humans are too quick to fall under its spell."